16 Must See Places In London for Shakespeare Fans

You are here: Home1 / Welcome To The No Sweat Shakespeare Blog!2 / Historic Shakespeare3 / 16 Must See Places In London for Shakespeare Fans

Whilst Stratford-upon-Avon is well known as Shakespeare’s home town, London is often overlooked as a travel destination to connect with Shakespeare – other than perhaps taking in a performance at Shakespeare’s Globe Theatre.

It’s worth remembering that Shakespeare left his family in Stratford and spent a large portion of his life living and working in London, making his name in England’s capital city. Although the Great Fire of London and World War 2 both led to destruction and large-scale redevelopment of London, it’s still possible to trace the Bard’s legacy back via a number of Shakespeare-related buildings and sites London… if you look hard enough.

Shakespeare didn’t buy a house in London to live in, but rather lived in lodgings in various locations. We know these addresses from parish and court records that have survived to this day.

in 1596 Shakespeare was living in the parish of St Helens in Bishopsgate. We don’t know the exact address, but if you want to breathe in the air of Shakespeare’s first London home take a stroll around the area of Leadenhall Street and St Mary Axe in Bishopsgate.

By 1598 Shakespeare was living within a minute’s walk of the building site that was to become the Globe Theatre, at the Liberty of the Clink, which surrounded the infamous Clink Prison. Walk eastwards along Bankside towards London Bridge to pass the prison on Clink Street. 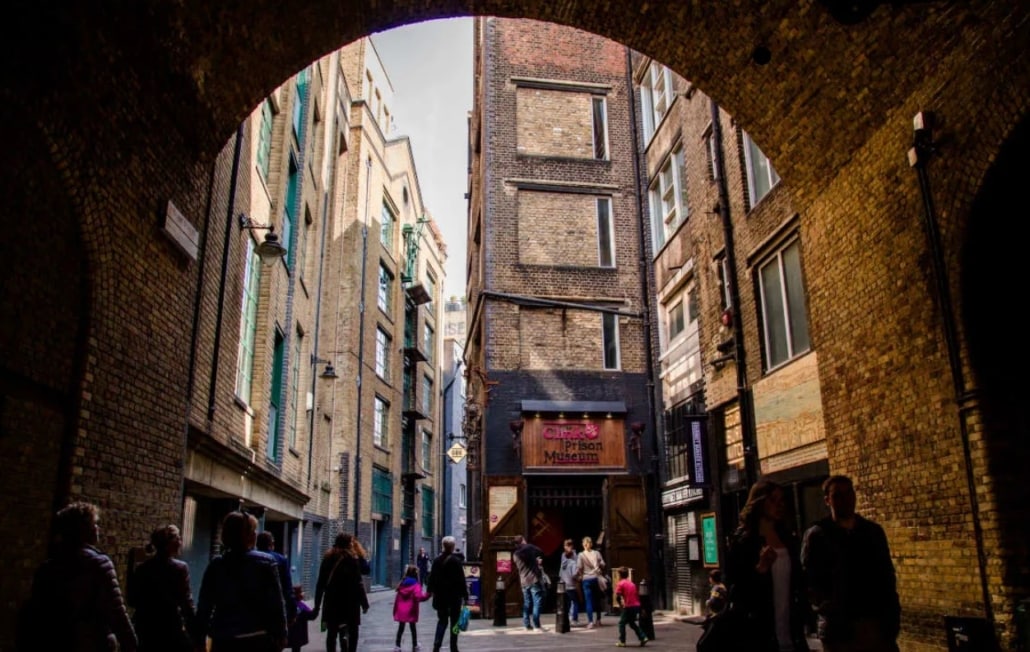 In 1604 Shakespeare was lodging with the Mountjoys, a French Huguenot family living in Silver Street, St Paul’s. The Mountjoy house was destroyed in the Great Fire and the whole area was flattened in the Blitz. The area was redeveloped and there is no Silver Street, but there is a plaque to the house on the corner of London Wall and Noble Street, very close to St Paul’s Cathedral. 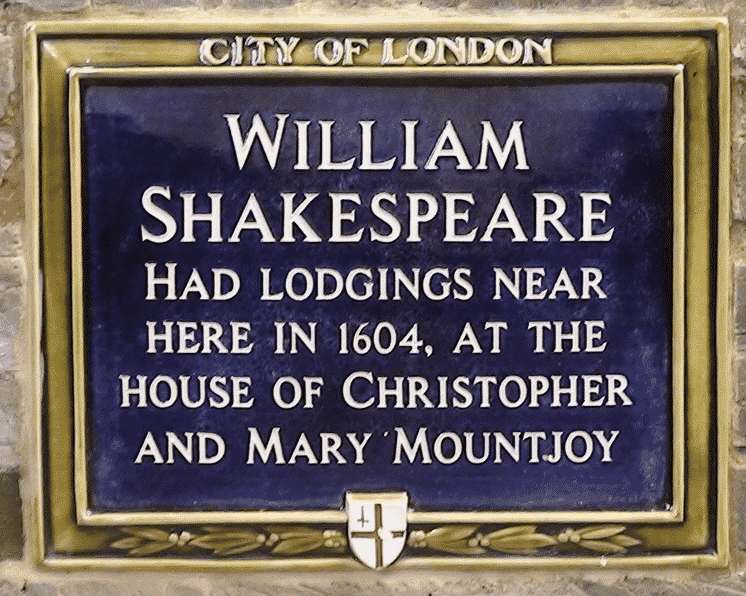 London has plenty of pubs that were serving beer in Shakespeare’s day – the Cheshire Cheese, the Lamb and Flag, the Old Mitre – but Southwark’s the George Inn has a particularly close connection to the bard.

This traditional English tavern dates to 1542 (though was burned down and rebuilt to the original plan in 1676), and is London’s only original coaching inn and remaining galleried inn. The pub is also a living example of the kind of establishment used by acting troupes before the purpose-built theatres arrived. In Shakespeare’s day, the pub actually surrounded three sides of a courtyard, with actors sometimes performing on a pop-up stage in the centre.

Shakespeare lived and worked close the George Inn and there’s no doubt he would have enjoyed the food and drink here on a regular basis – and possibly even possibly acted in the courtyard. With all of this heritage, the George Inn should be any Shakespeare fan’s number one stop for a pint! 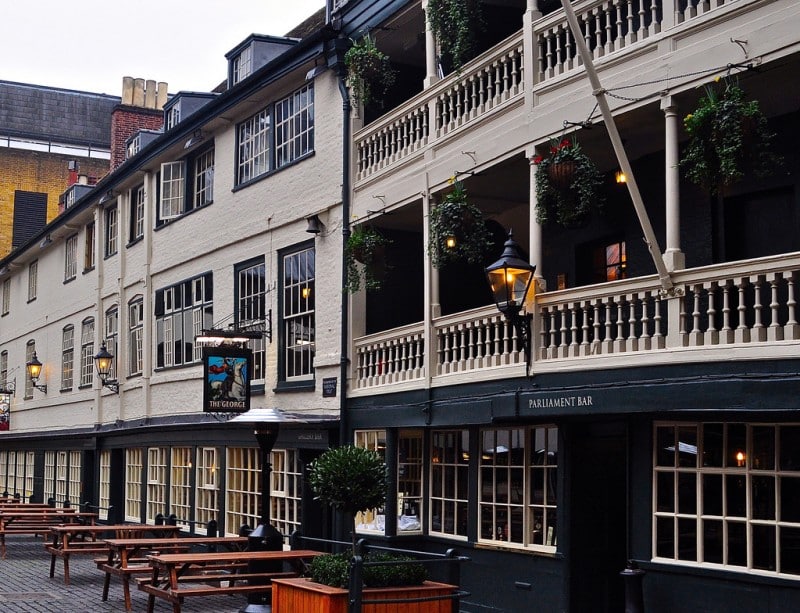 This London pub on St Andrew’s Hill marks the site of the old Priory Gatehouse, the only property Shakespeare owned in London. He bought the property for £140 in 1613, at a time when he’d more or less retired to spend his time in Stratford, and leased the building to the person he’d bought it from. However, given the property’s location close to the Blackfriars Playhouse and the Globe, it’s possible that Shakespeare stayed here on the occasions he visited London from Stratford. 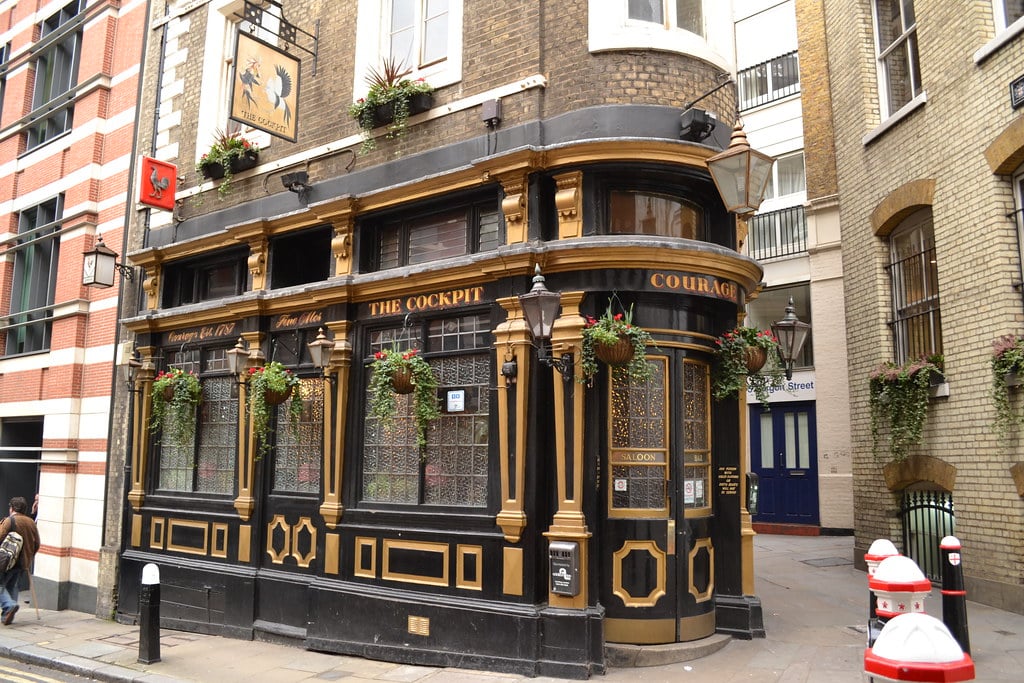 The Boar’s Head Inn was the Cannon Street drinking establishment that featured in Shakespeare’s Henry IV plays as the meeting place of Sir John Falstaff, Prince Hal and other characters.

Established around 1537, the inn was partially demolished and turned into retail outlets in the late 18th century. The boar’s head sign was kept, and is now installed in the Shakespeare’s Globe theatre. Whilst you sadly can’t get a drink these days at the Boar’s Head Inn, the neo-Gothic building on the site has a number of decorative references worth checking out, including a boar’s head peeking out from grass, and portrait heads of Henry IV and Henry V. 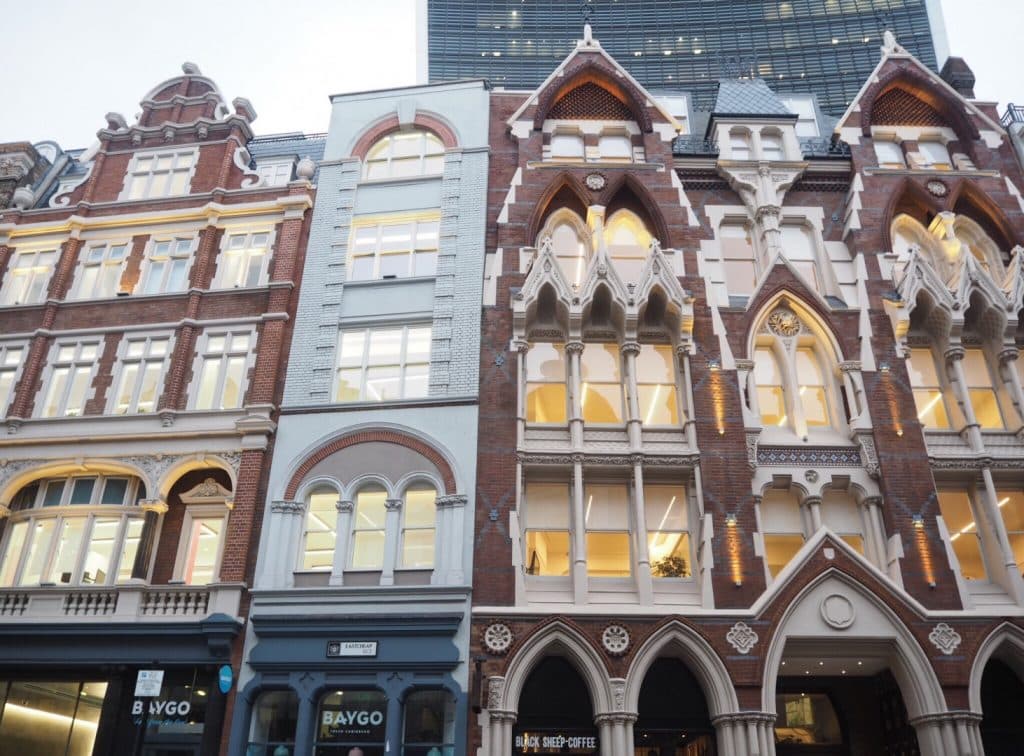 Whilst we’re on the theme of pubs, although Shakespeare set plays in England, Scotland, and Wales, none of his plays are set in Ireland. Which is a shame as Dublin has some of the world’s best pub, hands down!

Shakespeare acted with, wrote for and ultimately became a shareholder in The Lord Chamberlain’s Men acting troupe, who went on to become The King’s Men after receiving patronage from King James in 1603. The troupe – including Shakespeare – performed in their own theatre and in theatres across London, most of which there is sadly no trace other than plaques on walls.

Along Curtain Road is the green plaque to mark the spot of ‘The Theatre’, built in 1576 as London’s first permanent, purpose-built theatre. It was in this theatre that Shakespeare began his acting and writing career with The Lord Chamberlain’s Men theatre company. In 1598 the company fell out with the landowner so dismantled The Theatre and took its timbers across the river to construct a new theatre – The Globe – in Southwark. A plaque on the wall is all that remains of The Theatre. Read more on The Theatre. 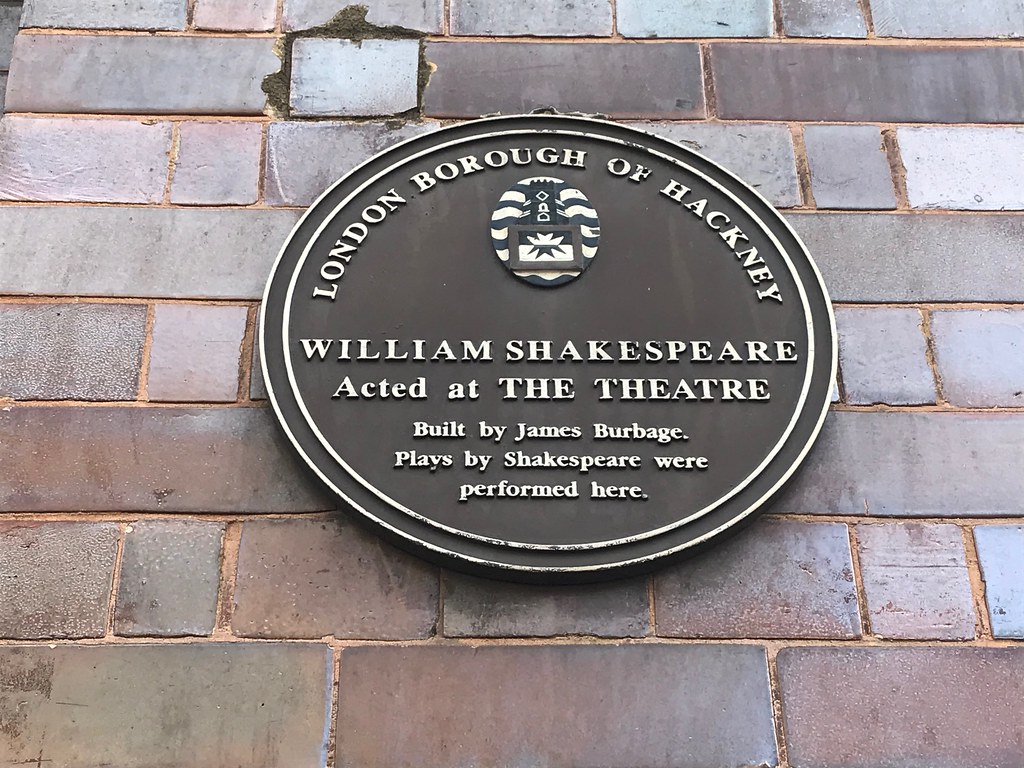 Once The Lord Chamberlain’s Men’s lease ran out on The Theatre and The Globe Theatre was under construction the acting troupe used alternative premises. They moved to the nearby Curtain Theatre – in Curtain Close, Shoreditch – for two years until The Globe Theatre was completed, during which time we know both Henry V and Romeo and Juliet were performed. A plaque on the wall now marks the spot. Read more about The Curtain Theatre. 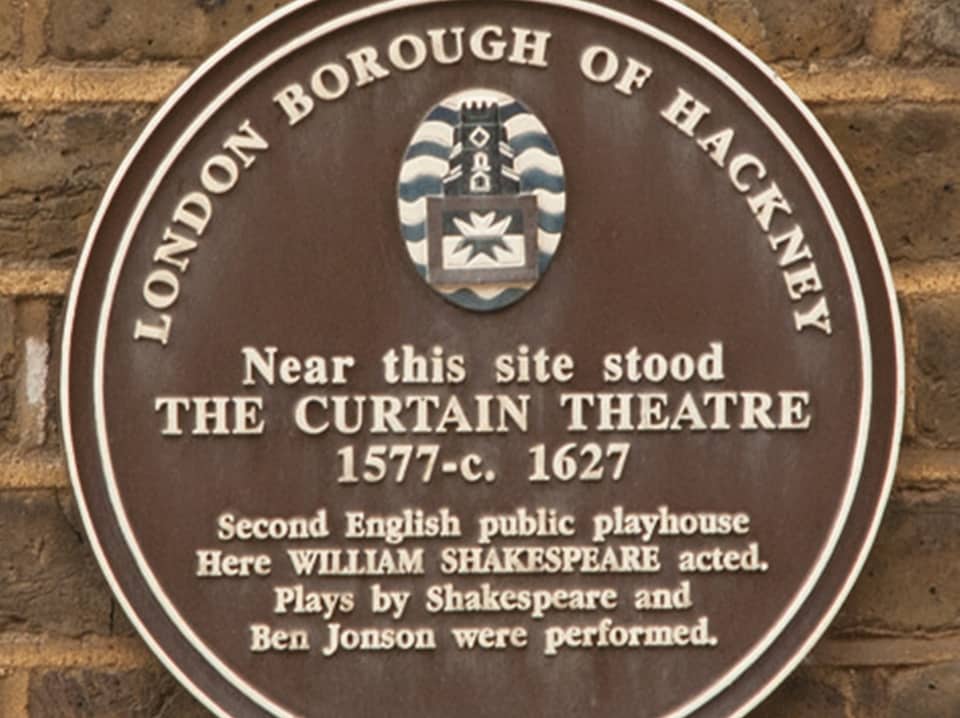 Not to be confused with Shakespeare’s Globe – which is a replica of how The Globe Theatre would have looked in the 16th century – this is all that remains of the original Globe Theatre, one of the most famous names in theatre. Sadly, The Globe Theatre is now little more than a barren patch of part-excavated land in a Southwark back street. Only about 5% of the theatre has been excavated, with the rest lying below a listed Georgian building and Southwark Bridge. In front of the excavated part is some information about the theatre and a commemorative stone sculpture. Read more on The Globe Theatre. 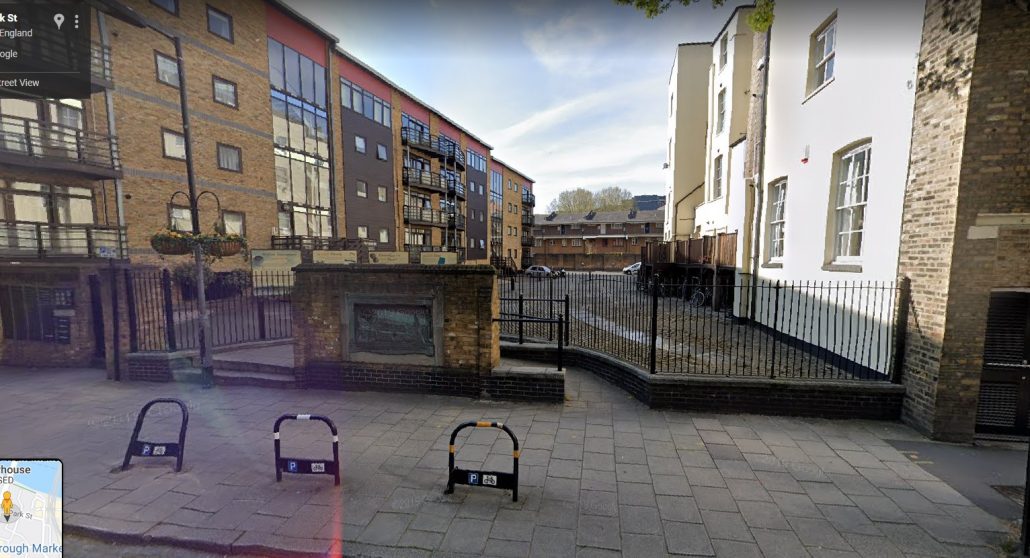 The remains of Southwark’s The Rose Theatre were discovered in 1989 during the demolition of an office block. The theatre was built in 1587 by Richard Henslowe who kept meticulous records, meaning we know more about The Rose than any other Elizabethan theatre – including the fact that both Shakespeare’s Henry VI and Titus Andronicus premiered at The Rose. Today you can visit a viewing platform and exhibition to see the position of its stage. 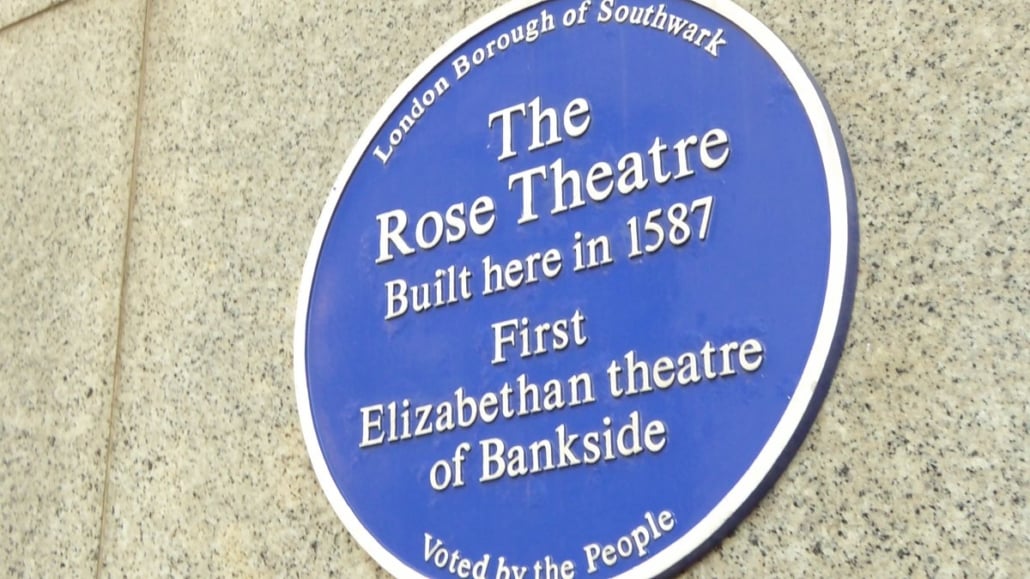 This humble-looking cobbled yard in Blackfriars was the site of The Blackfriars Theatre, considered the template from which subsequent indoor theatres evolved. Blackfriars was a private theatre – more exclusive and expensive than public theatres such as The Globe Theatre. The audiences were much smaller and protected from the elements by a roof. Artificial lighting in the form of candles was used, allowing for lighting effects not possible at outdoor, public theatres. 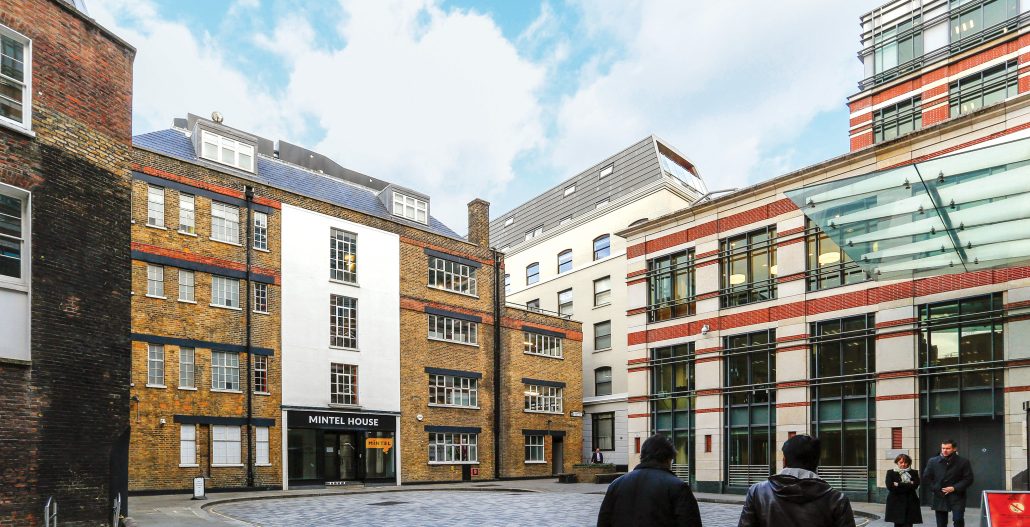 No trip to London would be complete without checking out Shakespeare’s Globe Theatre – now one of the city’s most iconic buildings. Set on the south bank of the River Thames the building is a faithful reconstruction of the nearby Globe Theatre, and hosts plays through the summer. With its open roof, apron stage and yard around the stage for a standing audience (the groundlings, or stinkards), catching a performance here offers a unique insight into how Elizabethan audiences would have experienced Shakespeare’s plays. 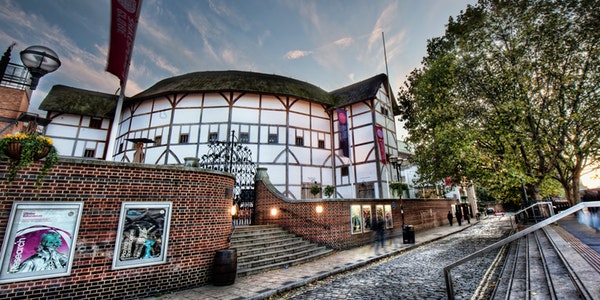 London’s Inns of Court are a complex of labyrinthine historic buildings around Holborn that make up the professional associations and offices for barristers in England and Wales.

In Shakespeare’s time, the Inns of Court were four law schools (the Inner Temple, the Middle Temple, Gray’s Inn, and Lincoln’s Inn) where the King’s Men occasionally performed. The Comedy of Errors and Twelfth Night are recorded as having gala performances at Gray’s Inn in 1594 and Middle Temple in 1602 respectively. Shakespeare also used Temple Garden at the Inns of Court as a setting for Act 2, Scene 4 of Henry VI Part 1.

Southwark Cathedral would have been a dominant feature on the London skyline in Shakespeare’s era. It was the parish church of St Saviour’s and St Mary Overie – an area that covered some of Shakespeare’s lodgings – and is also where William’s brother Edmund was buried in 1607. On the south aisle of the cathedral is a monument to Shakespeare, dedicated in 1912. 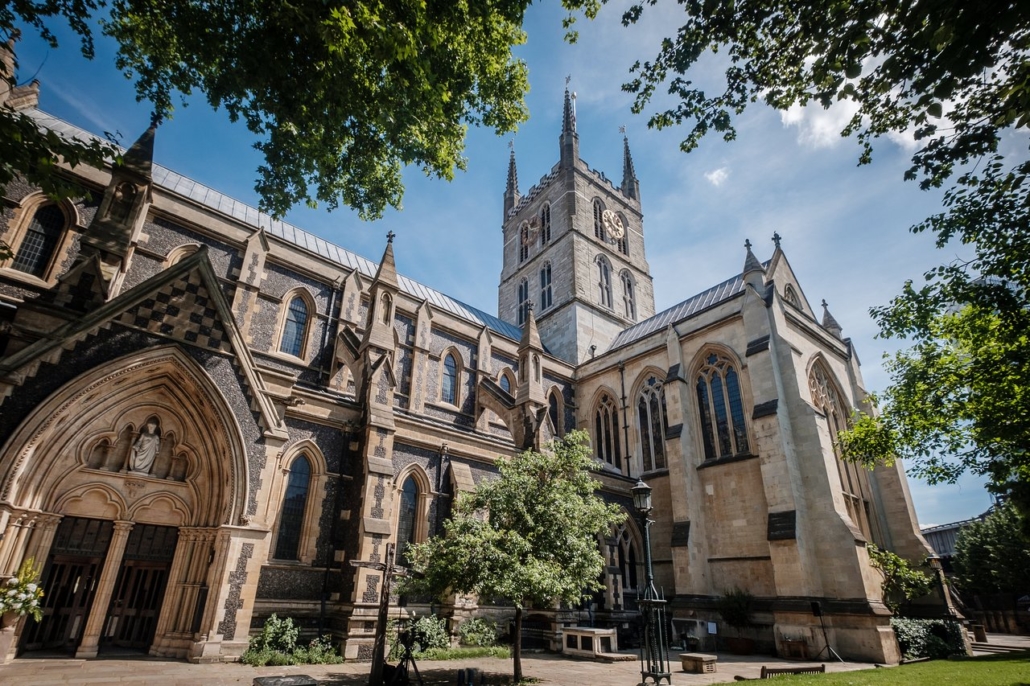 The UK’s national library has some wonderful Shakespeare artifacts available for public viewing, and right at the top of this list is Shakespeare’s First Folio. This is the first collected edition of Shakespeare’s plays, published after his death by two colleagues from the Lord Chamberlain’s Men. The British Library actually owns five copies of the 233 known to exist today, and their display copy is said to be the most widely seen First Folio in the world. 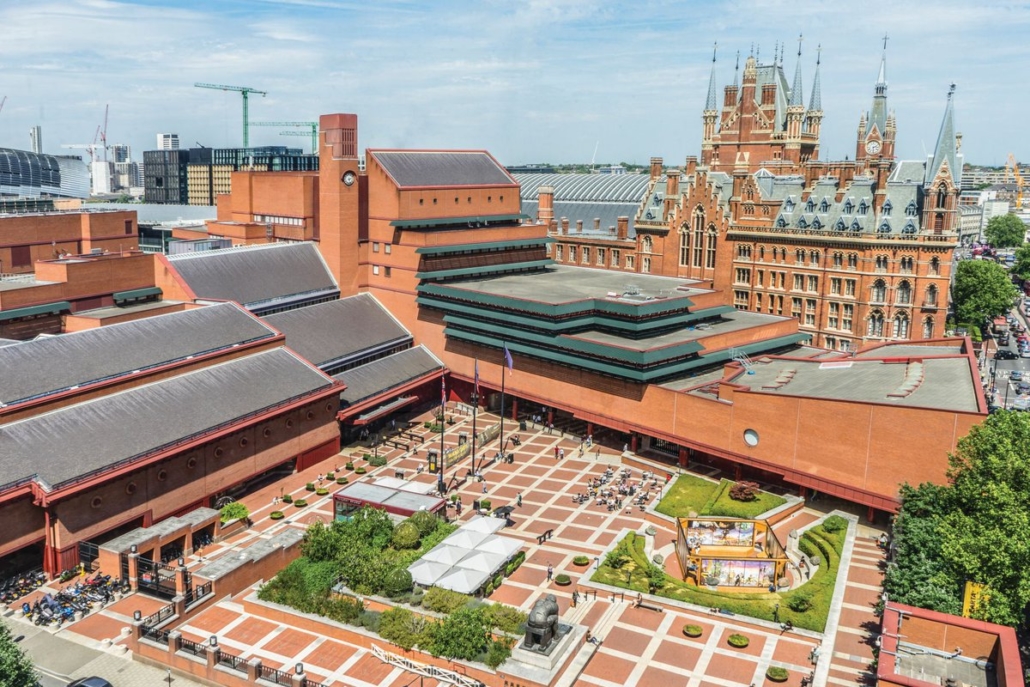 The Royal Exchange was possibly the world’s first shopping mall, founded as a centre for London commerce in the 16th century where the monied classes could buy wigs, jewellery, perfume, hats, shoes, breeches, shirts, feathers, silks, drugs, wine, spices, paper, ink, candles, toys, and anything else you could think of. Although the building was destroyed by fire twice, today’s building – erected in the 1840s – is similar in style to the original, with dozens of arcaded shops arranged around a central courtyard, and it’s easy to imagine Mr Shakespeare wandering the shops to pick out a new ruffle! 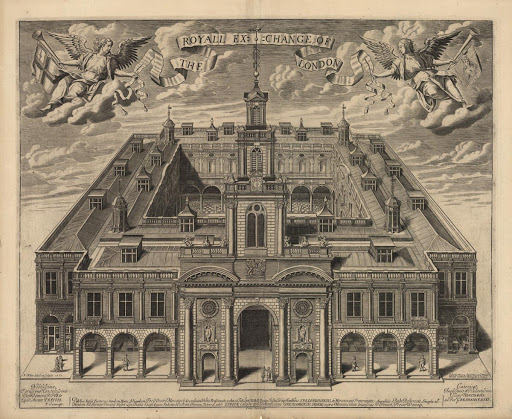 A map of Shakespeare’s London

Planning a trip to London?

We’ve pulled together some of the very best London resources from travel writers and websites below:

Free things to do in London with kids, from Flashpacking Family.

The very best of the UK for families, from UK Family Travel.

The epic London bucketlist according to Eternal Arrival.

London’s most fabulous – and unusual – afternoon teas, courtesy of XYU and Beyond.

A self-guided London walking tour, as shared by Exploring Kiwis.

Know where you’re going with the London landmark guide from The Travel Scribes.

What to do in London – other than the obvious, shared by Spend Life Wandering.

GloboTreks talk us through how to spend a day in East London.

Here are the best day trips from London according to Live Dream Discover.

Off the beaten track London list from Every Steph.

Photos with descriptions of places to visit in London, from photographer Noel Morata.

7 Continents 1 Passport bring us the 7 best free things to do in London.

Explore like a local – the best non-touristy things to do in London from Ala Jode.

Visit the cutest street in London, according to Globe Guide.

Discover the best hostels in London, curated by Hostelz.

4 Fun Malapropisms From Shakespeare’s Dogberry in Much Ado About Noth...

‘How Do I Love Thee’… Is It Shakespeare?
Scroll to top