A Brief Note On Riots And Shakespeare

You are here: Home1 / Welcome To The No Sweat Shakespeare Blog!2 / Historic Shakespeare3 / A Brief Note On Riots And Shakespeare

Shakespeare’s career was shaped by riots, contemporary as well as historical. Romeo and Juliet and Coriolanus both respond to social upheaval during his lifetime (labor-related for the former; food-related for the latter). Henry VI Part 2 and Julius Caesar each stage the conditions that lead to public violence, while also dramatizing the uncertain chaos that can ensue (as when Cinna the poet was killed “for his verses” when he’s mistaken for Cinna the conspirator).

Shakespeare’s likely contribution to The Book of Sir Thomas More includes an eloquent appeal to the common humanity of native Londoners and continental refugees. And Shakespeare’s plays have been the occasion for later unrest, including New York’s Astor Place riot of May 10, 1849. 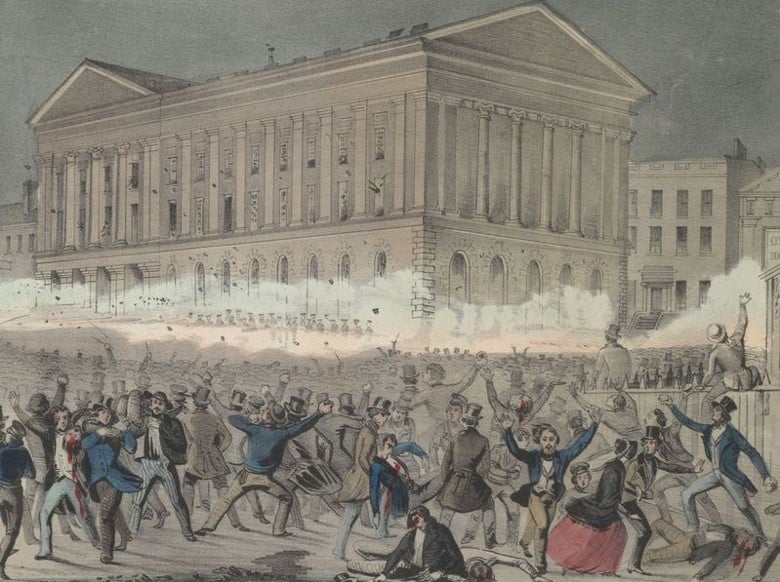 Yet strikingly, when you examine actual appearances of the word “riot” in Shakespeare, you find descriptions not of group behavior, but of unruly, licentious young men. King Henry IV upbraids Prince Harry for “his headstrong riot”; later, the newly crowned King Henry V rejects Falstaff as “The tutor and the feeder of my riots.” Goneril and Regan repeatedly complain about their father’s “riotous” retinue; Gaunt lambasts Richard II’s “fierce blaze of riot”; Venus laments that love is “too full of riot.”

These are, in the main, personal excesses — sex, drugs, and rock and roll. Where’s the communal action? Where’s the political tumult?

The quick answer is that the sense of “riot” as “public disturbance” was only beginning to catch on during Shakespeare’s era. The original, older sense was from the Old French riote (12c.) “dispute, quarrel, (tedious) talk, chattering, argument, domestic strife,” also a euphemism for “sexual intercourse.”

What’s even more unsettling about the evolution of the word is the political way in which “riot” could be invoked — as, for instance, to justify official suppression of an otherwise peaceful, planned protest. In the United States, the term “riot” has long since become racially charged. Yet who gets to define what counts as a riot remains contentious; in this sense, little has changed.

Martin Luther King, Jr. was a lifelong remaker of Shakespeare, most memorably in his 1963 March on Washington speech, which tropes Richard III’s famous opening line: “This sweltering summer of the Negro’s legitimate discontent will not pass until there is an invigorating autumn of freedom and equality.” Less than a month before he was assassinated in Memphis, he characterized a riot as “the language of the unheard.” He sought “for an alternative to riots on the one hand and timid supplication for justice on the other.” His answer: “that alternative is found in militant massive non-violence.”

Guest Blog Post by Scott Newstok, professor of English and founding director of the Pearce Shakespeare Endowment at Rhodes College. He is the author of How to Think like Shakespeare and Quoting Death in Early Modern England, editor of Paradise Lost: A Primer and Kenneth Burke on Shakespeare, and co-editor (with Ayanna Thompson) of Weyward Macbeth.
0 replies

Shakespeare Quotes On The Coronavirus Pandemic