You are here: Home1 / Welcome To The No Sweat Shakespeare Blog!2 / Historic Shakespeare3 / Banishment in Shakespeare

Banishment is the state of being exiled or sent away from one’s home.

Being banished was the worst thing that could happen to an Elizabethan, sometimes even worse than death. Being in exile was a temporary condition but being banished was for life. It was something that fascinated Shakespeare and he explored it in several plays. 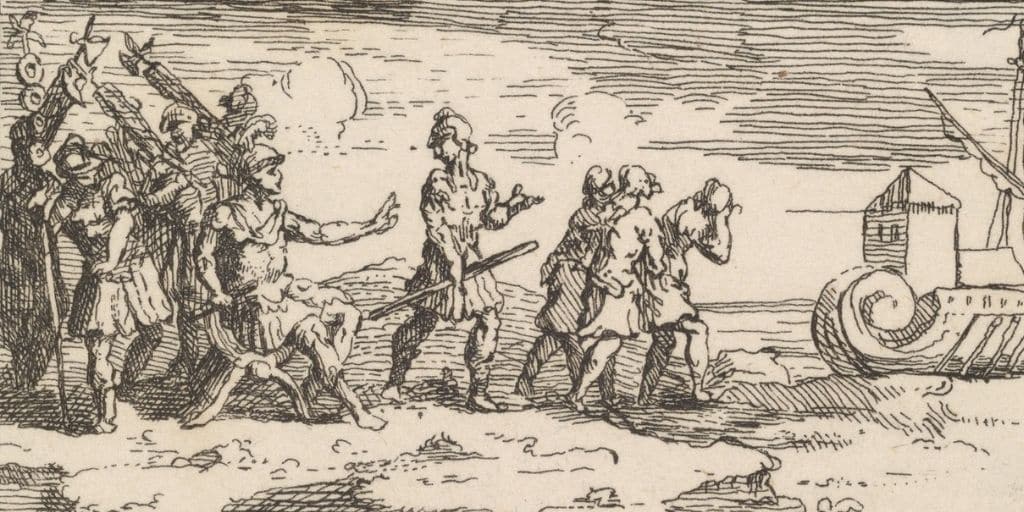 These days, when we can travel wherever we like in the world, being banished from the place of our roots would be bad but not as bad as it was for an Elizabethan. Not having the technology that we have, an Elizabethan would have been completely cut off from everything, whereas if we were banished we would be able to continue where we left off, using the technology at our disposal, The important people in our lives would quite easily be able to visit us, we would still be able to participate in meetings and other gatherings. It would be almost business as usual.

Banishment in Romeo and Juliet

For an Elizabethan banishment was a fate worse than death. Shakespeare gives us a good insight into the shock of banishment in Romeo and Juliet. Romeo has just killed Tybalt, and he flees to Friar Lawrence’s cell, terrified because the Prince has said that from now on anyone perpetrating violence will be sentenced to death. Romeo’s parents urge the Prince to be merciful and he decides to banish Romeo rather than execute him.

Friar Lawrence has gone into town to find out what the position is and when he returns he calls Romeo out of his hiding place. “What less than dooms-day is the Prince’s doom?” Romeo says, hoping that his punishment will be something less than death. Friar Lawrence tells him that it is, in fact, less than death. “Not body’s death, but body’s banishment,” he tells Romeo.

Romeo’s response is the fullest description of what banishment meant to an Elizabethan:

Ha, banishment? Be merciful, say “death”;
For exile hath more terror in his look,
Much more than death. Do not say “banishment”!

Here from Verona art thou banished.
Be patient, for the world is broad and wide.

There is no world without Verona walls,
But purgatory, torture, hell itself.Hence “banished” is banish’d from the world,
And world’s exile is death; then “banished”
Is death misterm’d. Calling death “banished,”
Thou cut’st my head off with a golden axe,
And smilest upon the stroke that murders me.

O deadly sin! O rude unthankfulness!
Thy fault our law calls death, but the kind Prince,
Taking thy part, hath rush’d aside the law,
And turn’d that black word ’death’ to “banishment.”
This is dear mercy, and thou seest it not.

’Tis torture, and not mercy. Heaven is here
Where Juliet lives, and every cat and dog
And little mouse, every unworthy thing,
Live here in heaven and may look on her,But Romeo may not. More validity,
More honorable state, more courtship lives
In carrion flies than Romeo; they may seize
On the white wonder of dear Juliet’s hand,
And steal immortal blessing from her lips,
Who, even in pure and vestal modesty,
Still blush, as thinking their own kisses sin;
But Romeo may not, he is banished.
Flies may do this, but I from this must fly;
They are free men, but I am banished:
And sayest thou yet that exile is not death?
Hadst thou no poison mix’d, no sharp-ground knife,
No sudden mean of death, though ne’er so mean,
But “banished” to kill me? “Banished”?
O friar, the damned use that word in hell;
Howling attends it. How hast thou the heart,
Being a divine, a ghostly confessor,
A sin-absolver, and my friend profess’d,
To mangle me with that word “banished”?

So banishment for Romeo means the end of his world, the end of everything his life means to him. The Friar tries to tell him that it’s better than death but for Romeo, it’s far worse than death.

Banishment is usually a political tool in Shakespeare’s plays. A king would sometimes banish someone who is a political threat. That made for great drama as it was a dangerous ploy: the banished person was likely to become more determined and may stir things up in the country of banishment, then come back, perhaps with an army. So banishment could make matters worse.

That is what happens in Richard II. The opening of the play is based on an actual historical event. Henry Bolingbroke accuses Thomas Mowbray of plotting his death; Mowbray denies it.  The king decides that the dispute will be settled by a single combat, which was to be held in Coventry. However, ‘when everything is ready for the fight King Richard interposes and banishes both combatants instead.

Some years later Mowbray dies, brokenhearted, but Bolingbroke decides to do something that was usually regarded as unforgivable –  depose the king. As monarchs ruled by divine right, meaning that they were chosen by God and anointed in a holy ritual, removing him or her from the throne, was going directly against God. It also meant that if the one who deposes the king, makes himself king and claims the throne he will never be recognised as the rightful king and will never be able to reign in peace.

Bolingbroke comes back and overthrows his cousin, King Richard, and claims the throne for himself. Although he is a good man he is never able to unite the country, and his reign is a failure. England doesn’t see any peace or harmony until he dies and his son, Henry V, who became one of England’s greatest kings in history, and portrayed as such in Shakespeare’s play, Henry V, succeeds him.

Whichever way one looks at it, banishment in Shakespeare is a very serious business.

BBC and The Royal Shakespeare Company’s The Winter’s Tale, 2021 –...
Scroll to top