You are here: Home1 / Welcome To The No Sweat Shakespeare Blog!2 / Historic Shakespeare3 / Building The Old Globe Theater: The Full, Strange Story!

The building process started on December 28th, 1598, but when it was finished and how it was built… well, that’s where this question gets interesting.

In the winter of 1598, Shakespeare’s troupe, the Lord Chamberlain’s Men, were in a unique situation. They had been performing at The Theatre on the north side of the Thames — but due to issues with the landlord, Giles Allen, moved to The Curtain Theatre.

Rather than stay there, a prominent member of the company, Richard Burbage, proposed a business opportunity to Shakespeare and other actor-shareholders of the company: buy some land on the south side of the Thames River, and build and manage their own theater.

After all, the south side of the Thames was a prime spot for theatre; they would be outside of London laws, and in the center of entertainment with pubs, bear-baiting, and other theatres like their competition, The Rose Theatre. 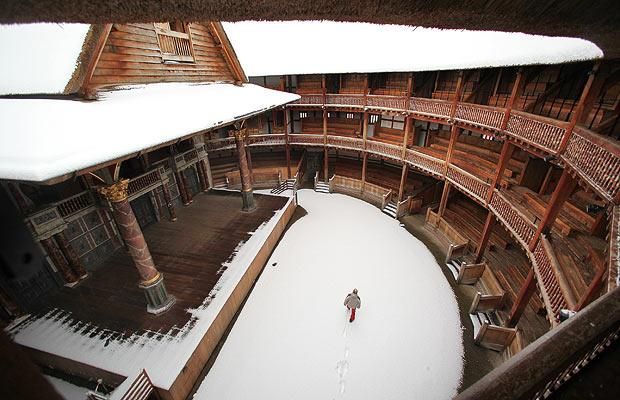 The modern recreation of the Globe, Shakespeare’s Globe, covered in snow. Source: The Telegraph

This was a bit of a risk — according to James Shaprio’s book, 1599: A Year in the Life of William Shakespeare, the other five actor-shareholders “would each cover ten percent of the remaining costs as well as the expenses of running the theatre.” This would come out to an investment of seventy pounds each, which was “considerable at a time when a freelance dramatist earned just six pounds a play” (Shapiro 3-4). Speaking of which, can you believe Shakespeare would have earned just six pounds for each of his plays?

But, even with that investment, they didn’t have all the money in the world for this venture. So, where did they get the supplies to build the Globe? From the dismantled timber of the Theatre. See, according to the Shakespeare’s Globe podcast, Such Stuff, Richard Burbage owned the actual building, just not the land it stood on. So, technically, the materials were his for the taking.

Building The Theatre – The Myths & The Facts

Now, there’s a fantastic story that Shakespeare and friends smuggled all of this timber over the frozen river Thames in the middle of the night on December 28th, 1598, and built the Globe Theatre by morning. But, says Will Tosh on Such Stuff, “When you really start to think about the story … the cracks in the story and indeed the ice become a little perilous.” So what really happened?

Well, if you think about how much timber you need to build a theatre, and that there were only about 17 men to get this done, there’s no way they could have brought the whole thing over the river and built the theatre in one night.

So, both Shapiro and Tosh suggest that, on the night of December 28th, the men probably brought the timber to a closer-by warehouse owned by a man named Peter Street. That way, the timber could stay safe over the winter months. That means that they didn’t really start the building process on the Globe until spring 1599, and likely didn’t finish until the early summer of 1599. 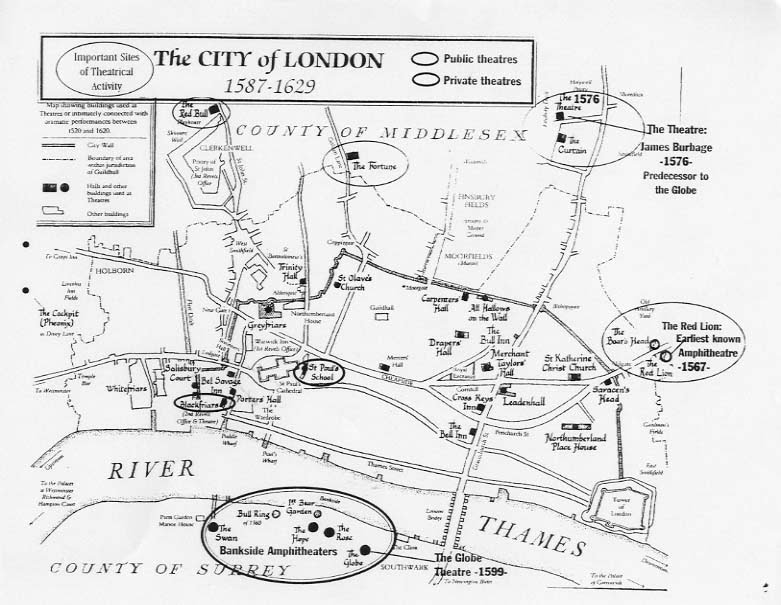 This map shows the main theatres in London at the time. You can spot the Globe in the “Bankside Ampitheatres” circle, and up in the northeast end, you can see the old site of The Theatre. Quite a distance!

That takes away a little bit of the romantic aspect of the Globe’s inception, doesn’t it? Not only was the Globe not built in a night, but it wasn’t even built over a season. There was no frozen river Thames, there was no Globe Theatre braving the morning sun on December 29th, 1598.

But, two things on that. One: would you have really wanted to risk your life going into a shoddy theatre that was built in a few hours? Yeah, no, thanks. And, two: did that mean this whole process was without drama? Yeah, no way.

There is something thrilling about the idea of Shakespeare and the Lord Chamberlain’s Men going to take this timber in the first place. In fact, Shapiro says that they were likely armed with weapons, suspecting trouble from the landlord’s men, as he was trying to lay claim to the timber of The Theatre, despite the fact that contractually it had belonged to Burbage. 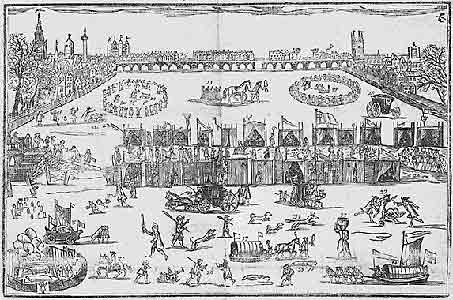 A 1683 depiction of a “Frost Fair,” the celebrations that used to be held on the Thames River when it froze over. Unfortunately, the river was not frozen when Shakespeare and his men built the Globe. Source: Victoria and Albert Museum

And, as expected, the landlord, Giles Allen, did not take too kindly to seeing the timber of The Theatre gone. He ended up taking the Lord Chamberlain’s Men to court, and the case was heard several times by several different levels of courts — Allen wanted to take this as high up as he could. Much of the information from those court cases survived, so we get to know about all the real-life drama of the building of the Globe, in addition to the dramas that were acted inside of it.

In fact, those documents are how we know for certain that Burbage and the other men who went to dismantle the Theatre were armed. Allen claimed during one court case that they “armed themselves with diverse and many unlawful and offensive weapons, as namely, swords, daggers, bills, axes, and such like” (you can see the full document via the Folger Library here.)

So, when was the Globe Theatre built? Between December 28th, 1598 through around July 1599. But where it was built, how it was built, and with what it was built…even without the single-night “frozen Thames” story, is where the drama lies.

Did you know the truth about the building of The Globe Theatre? What did you think was the most exciting part of the story? Let us know in the comments below!

Enjoyed reading about The Globe Theater? Read our selection of the best Globe Theatre facts.

7 Reimaginings Of Shakespeare’s Plays By Novelists