You are here: Home1 / Welcome To The No Sweat Shakespeare Blog!2 / Reviews3 / Chiswick Playhouse’s All Women Macbeth: Review

A group of players with nothing more than a small acting space, a few crates to be used as tables, a throne, a scaffold, and some black drapes with multiple places for entering and exiting, are all you need to grip an audience with one of the best thrillers ever written.

And indeed, this production of Macbeth by the all women Stamford-based group, Players, led by Beckis Cooper, currently on at the Chiswick Playhouse, succeeds in a fast-paced, vibrant version.

Much has been said about the actors all being women. All that is barely relevant though: Macbeth is a story that grips, as long as it’s well told.

In planning this production Ms Cooper regarded the prospect of a female only version, and her role as Macbeth, as a personal challenge:

“Everyone’s either a warrior or a fighter so it’s a real challenge. I’m playing him as a man but obviously I’m a woman so I’m exploring elements of masculinity.”

How that personal challenge is working out for her development as an actor or a woman isn’t known but as far as the performance is concerned it isn’t an issue. Ms Cooper also said:

“I think the greatest roles – comic and tragic – are male and I feel like it’s time for us to have a go at some of these amazing roles and not let the gender bother us… I wanted to see if we could do a version that gets past gender… Can you look at the play and not see that they’re women, just focus on the characters?”

The answer is yes, and the group demonstrates that with commitment and skill, and the obvious enjoyment of having the opportunity of performing some of the most vivid and ‘masculine’ roles in English drama, in a play that also, by the way, includes one of the great female roles as well. 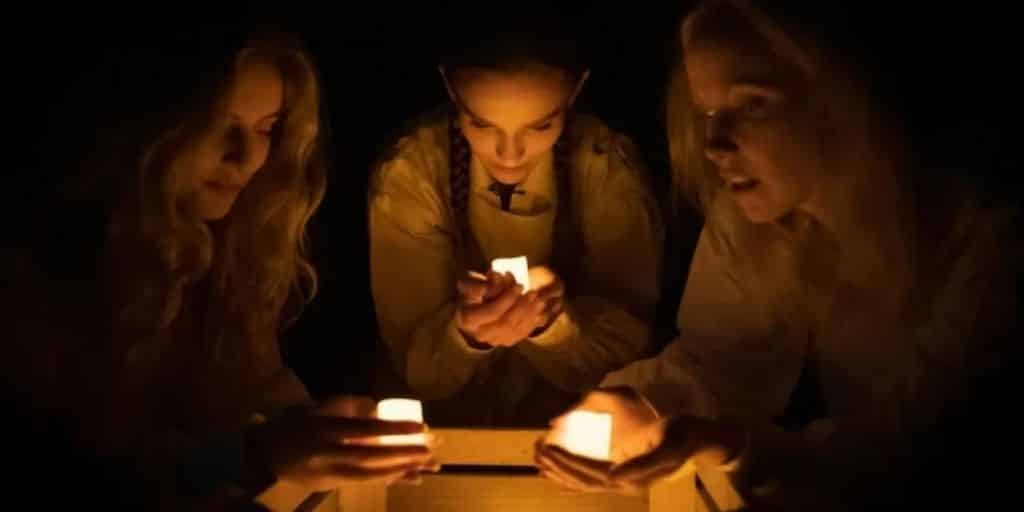 The three witches at The Chiswick Playhouse

Macbeth is about ambition and guilt, and the fact that the players are women does not deflect from that. However, the play demands answers to the question ‘what is a man?” a question repeated several times. Shakespeare did not confine the question to gender, however, but tied it to those themes of guilt and ambition, and courage – the last of those assumed to be a masculine quality. In spite of just a flicker of distraction by this conversation taking place between two women actors, Ms Cooper’s aim of getting past gender succeeds.

The director, Lisa Miller, makes some decisions to help get past the gender question by dressing the male characters in a kind of uniform – black trousers and period tops with sometimes a waistcoat. The hairstyles are altered according to the roles, long female for the witches and tightly pulled-back when they reappear as thanes. Macbeth, herself, has an androgynous hairstyle. Those measures concede to the audience’s need to suspend their disbelief but do nothing to assert this as a feminist enterprise. So now we can regard this as nothing more than a group of women innocently and quite reasonably, without an agenda, wishing to perform some of the most interesting roles in the Shakespeare canon. Fair enough.

And now – the performance. Outstanding!

This is exactly how a play should be performed, with close contact with the audience, the players relying on their acting alone, rather than being assisted with technology, artwork etc. The standout advantage-taker of being close to the audience is Caroline O’Mahoney, holding the record for the number of roles, but excelling in that of the porter, and presenting a most entertaining cameo.

Apart from that, singling out any one actor would be a useless enterprise, as they are uniformly good. There are moments, though, when unnecessary voice projection produces some shouting at points where, given the intimacy of the arena, a more carved-out depiction of high emotion would be more effective. The theatre holds only about a hundred people, so even whispers can be heard.

Congratulations to Rachel Sampley for the effects created with the lighting facilities available to her. The whole performance takes place in the dimmest lighting possible without making the action invisible.  The light focused directly on an actor delivering one of the many soliloquies in the play, becomes stronger, thus highlighting the wonderful poetry while also demonstrating the desolation of the characters, who exist in darkness, stepping back into it after speaking briefly. Consequently, the audience is in that atmosphere of evil throughout.

However, any criticism is a mere quibble. Watching the dramatic telling of this story by Players is a huge pleasure and a great evening in a congenial theatrical venue. Well done to Beckis and her colleagues.

Review: ‘Doing Shakespeare’ at the Bridewell Theatre
Scroll to top