You are here: Home1 / Welcome To The No Sweat Shakespeare Blog!2 / Reviews3 / The Comedy of Errors, RSC Stratford, July 2021 Review

The Comedy of Errors is on at the RSC’s Lydia and Manfred Gorvy Garden Theatre until 26th September 2021. Phillip Breen’s outdoor production is a laugh-a-minute two-hour traffic in which he wrings every drop, and more, of comedy out of the text. Supported by a strong cast, he entirely fulfills Shakespeare’s intention, which is to make his audience laugh so much that they will storm the theatre door for admission to his next play.

This is Shakespeare’s adaptation of the Roman playwright, Plautus’ Menaechmi, the story of a pair of identical twins, separated in infancy and mistaken for each other when one of them finds himself in the city in which his brother lives.

Like all Shakespeare’s adaptations, in which a simple bright idea can generate innumerable possibilities for humour or tragedy, in this case, it is that each brother – both named Antipholus – should have, as his servant, one of the two identical twins separated with them. And like the brothers, the servants are given the same name – Dromio. Shakespeare then gets to work and the misunderstandings and mix-ups, now coming from four places instead of Plautus’ two, proliferate endlessly. The effect is a dizzying merry-go-round of hilarious encounters.

Phillip Breen makes the most of it, exploiting every scrap of text for its comic possibilities. For example, Antipholus of Syracuse (Guy Lewis) and his servant, Dromio of Syracuse (Jonathan Broadbent) frequently engage in comical/philosophical conversations, and on one occasion while they are sitting in a café a waiter arrives and while serving them his toupee comes loose, revealing his bald head. 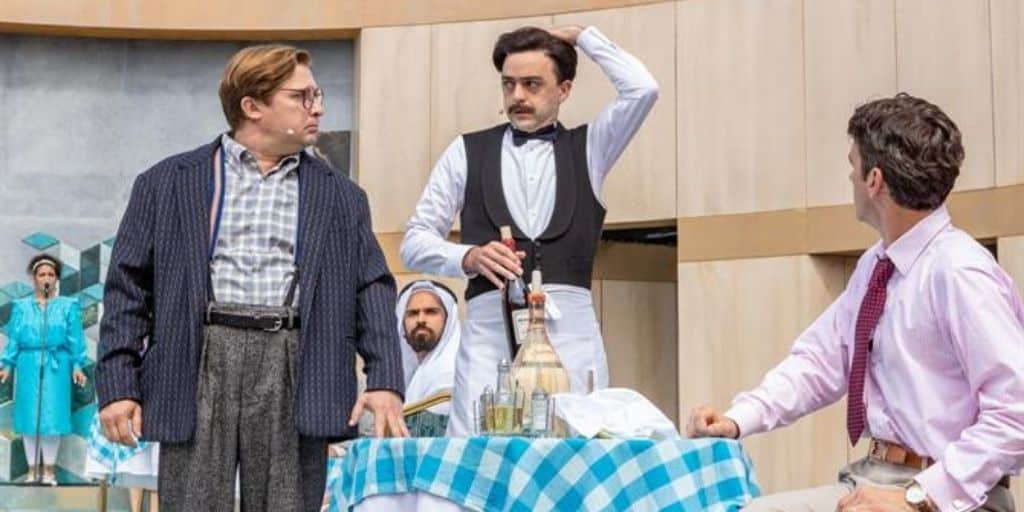 The RSC’s The Comedy of Errors on stage

The two Syracusians begin peppering their language with the word ‘bald,’ which occurs frequently, of course, in that passage of the Shakespeare text. They pronounce the word pointedly, to make fun of the waiter, who, while serving them, reacts comically every time they do. As there is no speaking part for a waiter in the text, or even any part at all for a waiter, somehow, between the actors, who make a great deal of it on the stage, and their director, Breen, this very funny vignette, generating a half a dozen outbursts of laughter, and developed to Chaplinesque perfection, was born out of nothing. Shakespeare would have applauded that kind of inventiveness by his actors.

There is more of that, like the scene in a gym with inept yoga performances and grotesque physical contortions by the two sisters, as they discuss Antipholus of Ephesus apparent betrayal of the one with the other.

The performances are very physical throughout: ‘Slapstick’ is the word that describes this production. But Breen, fully aware that the play being a Shakespeare comedy, knows that he would not be doing his job if he did not also bring out the darkness that lurks in all of Shakespeare’s comedies.

At the heart of this domestic drama there is an unhappy marriage that doesn’t need much to put it in crisis, with a dissatisfied wife and a husband conducting a dodgy relationship with a prostitute. There is also the lonely Antipholus of Syracuse, slowly sliding into depression, and the very popular and gregarious Antipholus of Ephesus (Rowan Polonski) beating his servant black and blue. Breen’s production doesn’t skirt around any of that. The play doesn’t end with the usual joyful pairing of lovers we always find in Shakespeare’s comedies, but with a rather sad collection of detached individuals, and with confusion still lingering. Breen does nothing to warp that into a staged representation of a happy ending, as we may find in some productions of this play, but shows it in all its bleakness, even emphasising the awkwardness of the moment that the brothers Dromio embrace.

This is a very theatrical production. Although having music between each scene becomes a bit irritating, it’s great and enjoyable music from Paddy Cunneen, performed by a group of choristers, a la Swingle Singers. And after the wistful conclusion, the dance that follows readjusts the mood and sends the audience away happy.

Apart from Jonathan Broadbent as Dromio of Syracuse, who stands out as a comic master, perfectly interpreting and executing this early Shakespearean wise fool, and Baker Mukas playing Angelo as an hilarious, very ethnic goldsmith, it would be difficult to single anyone out from among the strong cast. The actually pregnant Hedydd Dylan, as Adriana, shouts a bit too much, though, and her vigorous running and jumping is quite alarming, given her advanced state, and raises concerns about how easily she may slip and fall if it were to rain on that open-air stage.

To be able to see a Shakespeare play on a stage, at last, is an inordinate treat, and this production, in particular, is more than a treat: it’s a feast, and a wonderful way for The Royal Shakespeare Company to welcome the post covid era.

‘Bodkin’? What Exactly Is A Bodkin?