Did Shakespeare take drugs? In 2001 analysis of pipe fragments from William Shakespeare’s house showed traces of cannabis, cocaine and hallucinogenic nutmeg extracts. It’s not known whether Shakespeare himself partook of these drugs, but it is a distinct possibility.

The Shakespeare Birthplace Trust in Stratford-upon-Avon, England, allowed South African research scientists from the Transvaal Museum in Pretoria to analyze twenty-four pipe fragments found on the grounds of William Shakespeare’s final residence in Stratford-upon-Avon, the New Place. The findings show that eight of the pipes tested contained traces of cannabis and two of the pipes contained traces of cocaine. Others appear to be laced with tobacco, camphor, and hallucinogenic nutmeg extracts high in myristic acid. 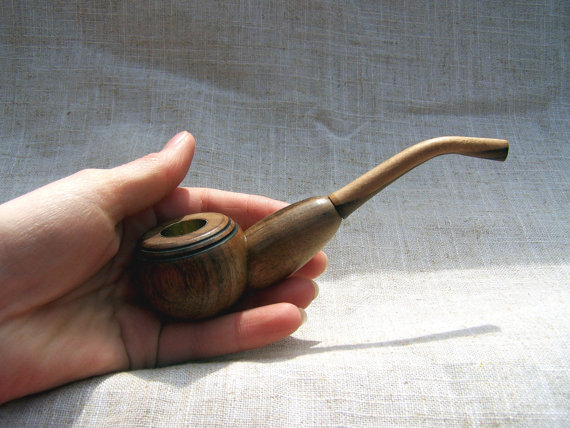 Other than the fact that the pieces of pipe were found in Shakespeare’s garden, nothing tied the pipe fragments directly to Shakespeare himself. This fact has ultimately led most prominent Shakespeare scholars to dismiss the team’s findings as nothing more than conjecture, even though drugs were generally not regulated substances in Shakespeare’s era – unlike today, where cannabis is only legal in a handful of countries. The mere possibility, however that the greatest writer in the English language smoked marijuana was enough to whip all aspiring artists/potheads into a frenzy, and the theory does potentially have some grounding in Shakespeare’s works, and the attitudes of the era.

References to Drugs in Shakespeare’s Works

It has been a long-standing but highly unconventional assumption that Shakespeare alludes to drugs and drug use in his works, particularly in his non-dramatic poetry. Narcotics of all kind have always been associated with heightened creativity. And Shakespeare mentioning weed within the context of creativity and writing lends credence to the fact that that was why he was interested in weed, if he was interested at all.

The lead researcher who made the pipe discovery, Francis Thackeray, explained at the time that he was spurred on to investigate the Bard’s alleged toking habits because of a singular but conspicuous mention Shakespeare made of ‘noted weed’ and ‘compounds strange’ – ‘compound’ known as early as 1530 to mean a substance formed by a chemical union of two or more ingredients. In Sonnet 76, Shakespeare writes:

Why with the time do I not glance aside
To new-found methods, and to compounds strange?
Why write I still all one, ever the same,
And keep invention in a noted weed…

And some have argued that Shakespeare’s use of language in Sonnet 27 suggests a reference to hallucinogenic drug us. It begins:

Weary with toil I haste me to my bed,
The dear repose for limbs with travel tired;
But then begins a journey in my head,
To work my mind when body’s work’s expired…

Drug Use in Shakespeare’s Time

The pipes found in Shakespeare’s garden date to the seventeenth century when hemp was used widely in the production of rope, clothing, and paper, and when marijuana was used to treat certain medical conditions. However, the discovery of the pipes laced with several narcotics lends credibility to the theory that people in Renaissance England used drugs for pleasure.

English explorers and traders, most notably, Sirs Francis Drake and Walter Raleigh, had been bringing back both tobacco and coca leaves from their expeditions to North and South America. So their presence in smoking implements of that time is not out of the ordinary. The cocaine residue was attributed to Peruvian coca leaves, which would have been in vogue during that period.

Ancient cultures were known to mix cannabis with other plants and herbs for treatment of pain, but no evidence exists that physicians in Shakespeare’s time used it for that purpose. Whether Shakespeare availed himself of marijuana for medicinal purposes is also unknown.

We will never know for sure, but if Shakespeare did use drugs as a tool to spark his creativity he certainly would not be the only literary genius to have done so.

What Exactly Is Early Modern English?

Shakespeare & The Beautiful Game of Football
Scroll to top