Elizabethan audiences loved it when the characters they were watching on the stage said something sexually suggestive. The double entendres were often more effective than today as the audiences were more aware of language than we are. Our response to multiple meanings has been dulled by the sheer volume of language we’re bombarded with, the move towards more explicit speech, and the increasing importance of moving images at the expense of the spoken word.

Shakespeare seemed to love titillating his audiences with double meanings, innuendos and, at times, sheer outright unambiguous sexual declarations. Here we’ve pulled together some of Shakespeare’s dirtiest lines… prepare yourself!

Hamlet: Then you live about her waist, or in the middle of her favors?
Guildenstern: Faith, her privates we.
Hamlet: In the secret parts of Fortune?

Hamlet is a character who frequently expresses himself in a sexually way. Here Hamlet is discussion with Guildenstern and Rosencrantz about how they are turns into an innuendo-ladened riff on how they’re dealing with fate… only in Shakespeare!

Top of Hamlet’s list of sex talk is this line, when he sits on a cushion beside Ophelia, settling down to watch the play within a play. His words are particularly obscene once you know that ‘nothing’ was slang in the Elizabethan era for a lady’s private parts, and that ‘country’ was likely pronounced with a large emphasis on the first syllable!

Much Ado About Nothing, Act 5, Scene 2

Benedick: I will live in thy heart, die in thy lap, and be buried in thy eyes.

On the face of it a deep and romantic line from Benedick… until you know that to ‘die’ in Elizabethan England was slang for an orgasm. And remember what ‘nothing’ was slang for? Puts the title of this play into a whole new perspective!

Graze on my lips, and if those hills be dry
Stray lower, where the pleasant fountains lie.

Need we explain this overtly sexual reference from one of Shakespeare’s poems?

Nurse: Thou wilt fall backward when thou hast more wit.

Juliet’s nurse is prattling on about what Juliet was like as a toddler. She recalls how the child would constantly fall on her face as she was learning to walk. But now, as she matures, she is more likely to fall on her back… whatever could she mean?

Mercutio: Now will he sit under a medlar tree
And wish his mistress were that kind of fruit
As maids call medlars when they laugh alone.
O Romeo, that she were! Oh, that she were
An open arse, and thou a poperin pear.

The young men in Romeo and Juliet are highly sexual, and here Mercutio is joking with Romeo who has been smitten by Rosaline, a girl he has seen and can’t stop thinking about her. Mercutio tells Romeo to find a girl who’s like a medlar fruit – known at the time as ‘open arse’ – and for Romeo to be a ‘poperin pear’. Strong case for the dirtiest line in Shakespeare!

Juliet: O happy dagger! This is thy sheath! There rust and let me die.

Most Shakespeare readers agree that Juliet’s line as she stabs herself involves two puns. One on ‘sheath’ – the Latin word for a vagina – and again using the Elizabethan slang for orgasm, ‘die’. Read in this light Juliet’s final words are both tragic, and dramatic innuendo.

Iago: I am one, sir, that comes to tell you your daughter and the Moor are now making the beast with two backs.

Iago is out to get Othello, and runs to tell Desdemona’s father that she has married him. This graphic description is yet another one of Shakespeare’s unique phrases that’s still in common use today – as a euphemism for sex.

No explanation needed for this dirty quip, is there?

Chiron: Thou has undone our mother.
Aaron: Villain, I have done thy mother.

Chiron doesn’t know that the villainous Aaron has been having an affair with his mother, but Aaron lets slip here in a classic Shakespeare insult.

Sir Andrew: But it becomes me well enough, does ’t not?
Sir Toby Belch: Excellent; it hangs like flax on a distaff; and I
hope to see a housewife take thee between her legs

Here the somewhat vain Sir Andrew Aguecheek fishes for compliments from his friend and tormentor, Sir Toby Belch, about his hair, but instead gets a put-down, together with a naughty suggestion.

Malvolio: By my life, this is my lady’s hand. These be her very C’s, her U’s and her T’s, and thus makes she her great P’s.

Malvolio is reading a letter that has been planted for him as a practical joke and which he believes comes from Olivia. It’s probably Shakespeare’s most crude linguistic joke, as the line would have been read, ‘her very C’s, her U’s, ‘n’ her T’s,’ and the Elizabethan audience would have been quick to understand what was being spelled out. And Shakespeare being Shakespeare, he adds an extra chuckle with the additional toilet-humour line of making great P’s! 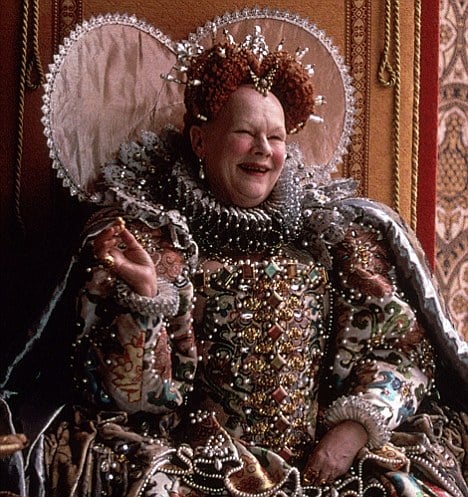 What do you think of Shakespeare’s dirtiest jokes? Any that you don’t understand, or that we’re missing? Let us know in the comments below!