You are here: Home1 / Welcome To The No Sweat Shakespeare Blog!2 / Reviews3 / Review: ‘Doing Shakespeare’ at the Bridewell Theatre

A group of six amateur thespians in the village of Felching are putting on a Shakespeare play. In spite of having a very limited knowledge or understanding of the Bard they’re all Shakespeare enthusiasts. They know that the audience is likely to be smaller than the cast but for them the play’s the thing so that’s not an issue. Led by a frustrated, exasperated but narcissistic director, there is something of A Midsummer Night’s Dream’s rude mechanicals about them. They arrive at the first rehearsal, each one having prepared their part. It turns out, though, that they have all prepared different plays.

David Spicer has adapted the play, ‘Doing Shakespeare,’ from his Zoom comedy, written for the Northern Comedy Theatre, and it’s having its first stage run at the Bridewell Theatre in London.

The first half of the play is an argument about which play to do and, it’s all about six giant egos trying to impose their choice of play on the others, and ends with a truly ludicrous solution. The second half is the actual performance of the play they have decided on.

This is a great idea for a comedy: it has all the ingredients – satire, jokes, misunderstandings, personality clashes and carefully constructed chaos. Spicer’s text juggles with the roles, as they spin and intersect each other’s paths, all balanced, equally weighted, the whole structure looking as though it’s going to collapse but miraculously surviving. The effect is a fast-moving, funny comedy before audiences who know the plays, performed by actors whose characters’ knowledge is severely limited, apart from the bits of dialogue they have prepared. It’s that link between those who know and those who don’t that drives the humour.

The leader, full of himself as the director, clipboard in hand, has prepared King Lear and cast himself in the leading role. He claims to have solicited the ideas of the others by email and they all insist that he hasn’t, and it becomes clear that it doesn’t matter anyway as he always pretends to listen to the others and then does what he likes. Ebon arrives as Hamlet, Rebecca is Katherine in The Taming of the Shrew. Jason has learnt Romeo and Judith has learnt Pericles, the play she did at school, and which the other actors have no idea about. It doesn’t matter what plays they do, she always plays the same role and no-one ever notices. Terri is sure that they had decided on Macbeth. She is fascinated with the witches but has learnt all the parts.

They proceed to exercise their egos, displaying their ignorance throughout. There is a running joke: Ebon is seriously superstitious, afraid of the curse on anyone uttering the word ‘Macbeth.’  He keeps doing it inadvertently, though, and then has to leave the room, perform a ritual and wait to be invited back. Of course there is a lot of play around that as they trick him into saying the cursed word and enjoying his struggle to get back each time.

There are all kinds of jokes, from the primary school level joke where Ebon talks about burying the king. ‘…… bury the king’, he says. ‘Inter?’ says Jason. ‘ ‘In soil,’ Ebon says, to more philosophical jokes: Rebecca suggests that The Taming of the Shrew is a feminist play, whereupon Jason challenges her ‘Why is it called taming, then?’ If it were a feminist play it would be ‘The attack of the Shrew’ or ‘Revenge of the Shrew.’ It’s a brilliant piece of comic writing.

They eventually find a way to perform their play. It will be a generic Shakespeare play, where everyone performs their own role and the meaning will emerge through the acting, with the help of such things as movement, vocal and facial expressions and gestures, to act out their idea of what a Shakespeare play looks like. The audience, not understanding Shakespeare’s texts anyway, will take it as a performance of a Shakespeare play. 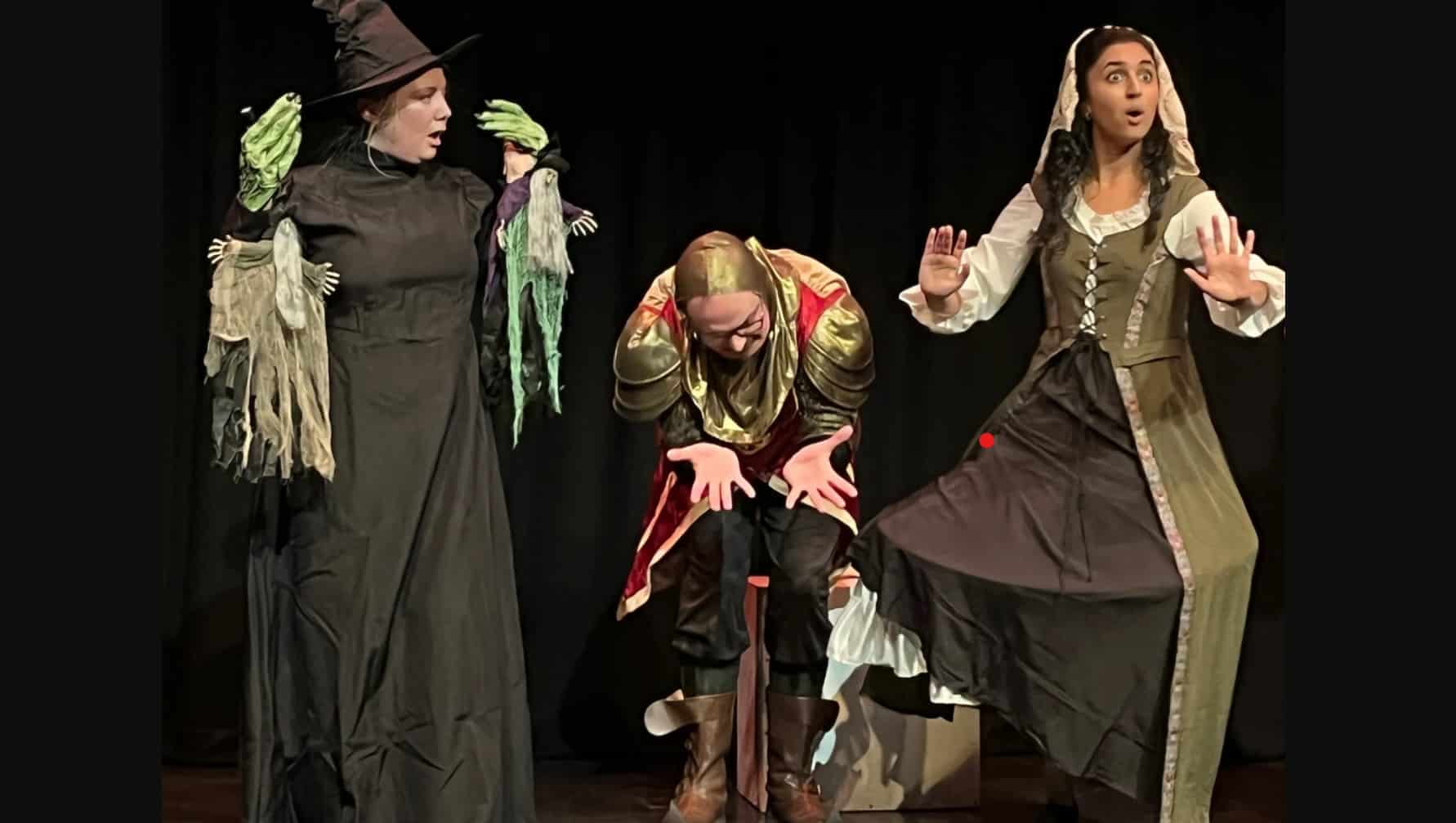 The second half is the performance. They appear in exaggerated, fancy-dress Elizabethan costumes and begin. Lear sends for his first daughter and asks her to tell him how much she loves him. Her answer is a contextless piece of ‘Shrew’ but spoken with passion. And so it goes from there with the kind of declamatory ‘bad’ acting criticised by Shakespeare as expressed in Hamlet’s advice to the players, and lots of other silly things, but none of it making any sense, resulting in a hilarious performance that, with the costumes, the poetry and the acting, looks like a Shakespeare play, but is nonsense.

An account of the final scene would be a spoiler but it certainly is funny.

There is no leading role, and therefore no leading man or leading lady. Spicer has created a text in which everyone has a leading role. The actors are uniformly outstanding. Actors convincingly portraying incompetent actors is not easy but all of these actors are very good at it. It’s not possible to single any one out. Perhaps the witch role is a bit more interesting than the others, and beautifully performed by Kathryn Chambers, although pointing at her is a bit unfair to the others. One could point to Robert Stuart-Hudson’s continued efforts to effect his opening speech, or Natasha Agarwal’s sweet innocence or Connor Simkins’ obvious superior intelligence, but why do that? They are all top-shelf performers.

It’s a basic production, with only some chairs on the stage, uniform lighting and only one or two props, which is all an audience needs with six charismatic and highly skilled actors, six equal parts and a great text. And well done to director Shaun Chambers for making the most of all that.