William Shakespeare and the Earl of Southampton

You are here: Home1 / Welcome To The No Sweat Shakespeare Blog!2 / Historic Shakespeare3 / William Shakespeare and the Earl of Southampton

Much has been written about the relationship between William Shakespeare and the Earl of Southampton. Well here is the actual story.

When Henry Wriothesley was a child his parents had a bitter break-up: his father accused his mother of infidelity and they separated. In his anger, the 2nd Earl of Southampton forbad his wife ever to see her only son again. The Earl died when Henry was about to turn 8 and the boy was taken in by Henry Cecil, Lord Burghley, the most powerful man in England, as his ward. Lord Burghley was the Queen’s most senior advisor with the rank of Lord Treasurer.

Burghley treated Henry like a son, hiring expensive tutors, and providing him with everything he needed for a privileged life, and sent him, at the age of 12, to Cambridge University.

Henry was now the 3rd Earl of Southampton. He was immensely rich and Burghley had plans for him. Henry graduated at 16 and Burghley, taking advantage of the corrupt wardship system, began arranging for him to marry his own granddaughter. When Henry was 18 he was confronted with that proposition. He refused. It was not that he didn’t like Burghley’s granddaughter –  in fact, he liked her: they had grown up together and were the best of friends. It was, he said, that he was opposed to marriage and he told everyone that he intended never to marry.

The young man’s mother and other relatives were alarmed. Burghley warned him that if he persisted in this foolishness after he came of age, he would, in his capacity as Master of the Wards, fine him. When Henry turned 21 Burghley did indeed do that. He fined him £5000, which would have been enough to build a stately home at that time. (In fact, it was not long after that that Burghley built Hatfield House in Hertfordshire.)

The young earl threw himself into court life and spent most of his time at the palace, eating , drinking, gossiping with other young courtiers and enjoying the entertainments that were laid on for the Queen. 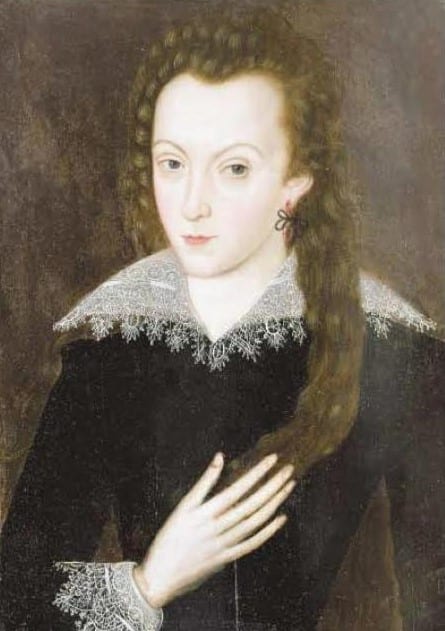 In 1593, when he was 20, he received a copy of a book from the famous actor and popular playwright, William Shakespeare. It was a poem, Venus and Adonis. The poet had written the dedication in his own hand:

Henry Wriothesley, Earl of Southampton, and Baron of Titchfield.

I know not how I shall offend in dedicating my unpolished lines to your Lordship, nor how the world will censure me for choosing so strong a prop to support so weak a burden; only if your Honor seem but pleased, I account myself highly praised and vow to take advantage of all idle hours till I have honored you with some graver labor. But if the first heir of my invention prove deformed, I shall be sorry it had so noble a godfather and never after ear so barren a land, for fear it yield me still so bad a harvest. I leave it to your honorable survey, and your Honor to your heart’s content, which I wish may always answer your own wish and the world’s hopeful expectation.

Your Honor’s in all duty,
William Shakespeare.

It was a dutifully humble dedication, as it had to be, considering this son of an unknown country squire, who consorted with common players, had approached one of the top aristocrats in the land, but when he read the poem Henry was astonished by its beauty.

In the meantime, Burghley and Henry’s relatives, realising that he preferred young men to young women, and that he meant what he had said about never marrying, thought it would be a major blow to the family fortunes. It was an enormous fine, and, moreover, the young Earl was reckless with his money, and he had no head for the business of managing his land.

But Southampton didn’t care. With an income of £11,000 a year, he had more money than he would ever need, and the disapproval of the relatives, whom he hardly knew, and his guardian, meant nothing to him. So talking to him about money was a waste of time.

They put his attitude down to what they had observed in him: that he was not interested in women, not even for the sake of producing an heir. They made up their minds to find a way through this predicament and resolved to apply some persuasion. They tried several tactics but Henry could not be persuaded to go anywhere near any young woman.

All of that is factual. What follows is a construction, based on circumstantial evidence, of what might have happened next.

With the £5,000 safely in his purse, Burghley now joined in with Henry’s relatives’ project. He hadn’t lasted such a long time as advisor to the Queen, with his head still intact, for nothing. He was a clever, wily man and came up with a brilliant idea. Having watched his ward for more than a decade he knew that the one thing, apart from timewasting, that could get his attention, was poetry. In his conversations with the young man he had learnt that Henry saw himself as a great patron of the arts in the years ahead. And he had noticed that Henry never missed a play performance at court.

Burghley had read Venus and Adonis, recommended to him by Henry and realised that its author certainly knew how to write poetry. Having spies in every area of English life he was aware that the poet was also the most popular playwright in London. He had also had reports that Master Shakespeare was very keen on making money wherever he could so he developed his plan around that knowledge.

The process began with The Lord Chamberlain’s Men receiving an invitation to perform at court in front of the Queen during December 1594. The company arrived at court with two new comedies, The Taming of the Shrew and The Comedy of Errors. The young earl was so taken with one of the actors, whom he identified as the poet who had sought his patronage, that he hung about when everyone was leaving and took the unusual step of approaching someone of low rank. He introduced himself to the actor, who was supervising the clear-up.

A few days later Shakespeare was approached by one of Burghley’s men. The man offered to pay Shakespeare a handsome sum for a series of poems intended for the eyes of the Earl of Southampton, in which the poet would “persuade” him to marry and produce children. Shakespeare accepted the offer.

Shakespeare never missed a thing and, having had the opportunity of observing Henry at close quarters, was overwhelmed by his beauty. He was struck by his bright eyes, his fair hair, and his fresh complexion and had already begun to process all that in his creative mind. He was in the process of writing sonnets at that time and he decided to write the Southampton poems as part of that sequence.

And the rest is history. Shakespeare did deliver on that commercial deal and, as a result we have those sonnets addressed to the “fair youth” – the first seventeen, the poems written to persuade Southampton to reproduce himself.

We don’t see Shakespeare as a writer who wrote his poems and plays with an agenda, but the argument contained in those seventeen sonnets is clear. The poems tell the fair youth what a waste it would be if he did not replicate his beauty.

The young Earl was clearly a narcissist, in the sense that he loved himself, thought himself to be the best, in looks, particularly. Shakespeare pushes that button by telling him that he is even more beautiful than he thinks he is, that he is insufficiently self-loving – that he should spend more time in adoring himself: “Look in thy glass, and tell the face thou viewest/Now is the time that face should form another” By that he means reproducing himself. By gazing longingly at his reflection he should resolve to preserve that beauty in the material world instead of in a mirror. He will grow old and lose his looks but he could have a son, and then a grandson who would carry that beauty on forever.

We don’t know whether it was Shakespeare’s poems that did the trick, but the Earl married eight years later and, at last, to the great relief of his family, produced an heir.

Just What Does ‘Hugger-Mugger’ Mean?