You are here: Home1 / Welcome To The No Sweat Shakespeare Blog!2 / Historic Shakespeare3 / Elizabethan Theatre Lives on in Today’s World

There are thousands of writers and actors all around the country who work in groups and make artistic decisions with their fellows. That’s a lot of fun. All player companies start out that way and some, if commercially successful, evolve into an established business. Those that don’t follow that route continue to choose, rehearse and perform plays but their company is always teetering on the brink of annihilation as audiences fade and members drop out to take up ‘proper’ jobs, some in theatre and others elsewhere.

Those small player companies normally have a major input from the actors, and decision-making is far from being an orderly process. A play about a group of actors deciding on a play to perform is bound to be a comedy. Such a thing, driven by highly talented, skilled and competitive people involves too large a dose of raw human nature to be otherwise. The precision and order of the established theatre is often not present. And so, disorder, with its accompanying humour, is close to the beating heart of real theatre.

English theatre began only in the second half of the sixteenth century. The first purpose-built theatre, ‘The Theatre,’ appeared when Shakespeare was 12 years old. When the young William Shakespeare got to London in 1589 he was already an experienced actor, having travelled with Lord Strange’s Men, performing in guildhalls and the houses of aristocrats. Although purpose-built theatres were very new, and only existing in London, they were mushrooming, and when Shakespeare arrived there were about twenty. Theatre was already big business: going to the theatre had become the most popular leisure activity in London and writers were working around the clock to feed this new appetite.

Each theatre had its entrepreneur, a team of very highly paid collaborating writers, and a company of players, all fully engaged in all aspects of play production.  The entrepreneur, or owner, hired writers and actors, managed the building and took the money – unless, as was the case when Shakespeare and some actors became ‘sharers’ in The Globe, a writer or actor took the business over. In the case of Shakespeare himself, when he became a sharer he was entrepreneur, writer and actor.

The writers chose the plays – their own – and they wrote plays about whatever they liked. They had little leisure time as the playgoers were insatiable and demanded new plays constantly. Theatres were staging three or four, or even five, plays a week, so there was no place for a writer who didn’t pull his weight. It was their job to get a play written in record time, then move on to the next one. Once performed the texts were disposable, and it is only by luck that we have any of them today.

The writers were educated men, usually Oxford or Cambridge graduates. Writing plays was a different activity from the other writing they did. They went into play writing for the money. There were several professions open to such educated men: schoolmastering, tutoring, the church, but they were all very good writers, with the mentality of writers rather than of pedagogues, and none of those occupations would have suited them. Some were poets, some pamphleteers, some translators and there were satirists and scholarly writers, but there was no money in any of those forms. It was all very well to have a book published but there were too few people who could read for a book to bring in any kind of income. A writer working in a team of playwrights could earn more in a few weeks than a schoolmaster would in a year.

The third element was the team of actors. They would turn the script into a play on the stage, using it mainly as a guide to their performance. They were expected to be multi-talented – to sing, and dance, play musical instruments, and to improvise around the idea of a scene. They would not have much chance of a rehearsal but would be given a text, sometimes only their own lines, and with the help of a prompter, use their skills and experience to realise it on the stage. The dialect would often have turned out very different from that of the text they had been given. There would be gaffs and out-of-focus speeches and many made-up bits, but they would be mainly what the actors thought would appeal to the audience and so would be loudly applauded. Actors were the lifeblood of theatre, and the less structured their activities were the more creative they were likely to be. That still holds true today.

Shakespeare became the top writer of his time, partly because he survived well beyond the life expectancy of 32, but mainly because he was head and shoulders above his contemporaries as a play writer. Not university educated, his acceptance by the snobbish writers wasn’t the easiest but he managed to find a way into a team and they came to respect him as a writer. Apart from being a great poet his feeling for the stage, for what audiences liked, and for realistic characters, were things that came from his experience as an actor.

As the years went by Shakespeare became the pre-eminent writer and also London’s most successful, and the richest theatre proprietor. Perhaps the secret of his success was that he regarded his actors as partners and made no decisions without using their instincts and experience. He stayed close, and took minor roles in performances, so in spite of his being rich and famous by the time of his retirement, he was always what had first attracted him to the theatre – an actor –  and, working with other actors, he would have participated in countless comic episodes in the preparation and performance of his plays. 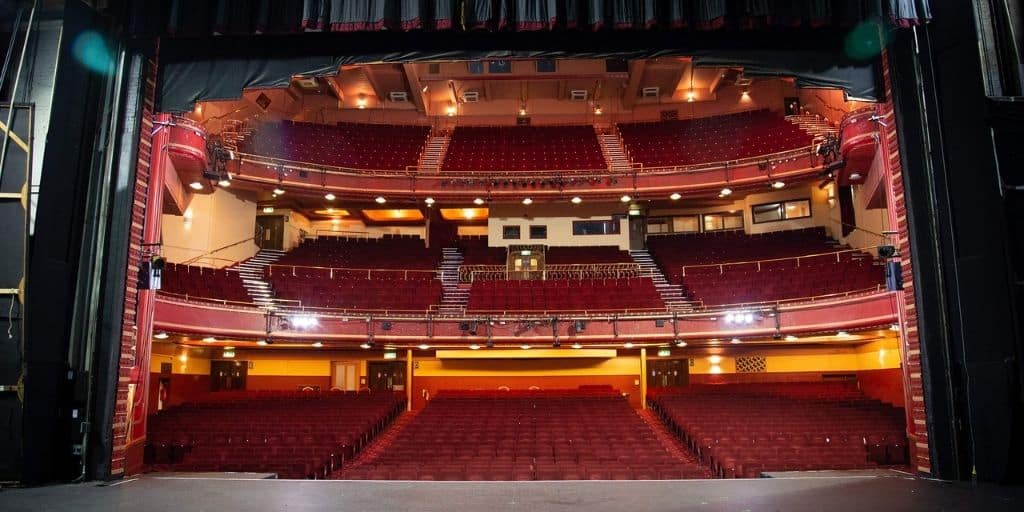 The modern theatre, which takes its cues from Elizabethan theatre

Metamorphoses at The Globe Theatre: Review