What Are ‘Groundlings’? A Definition Plus Some Fun Facts

You are here: Home1 / Welcome To The No Sweat Shakespeare Blog!2 / Historic Shakespeare3 / What Are ‘Groundlings’? A Definition Plus Some Fun Facts

It is thought that Shakespeare coined the word ‘groundlings’, which became the nickname for those audience members who stood at the theatre. In Elizabethan theatres, the stage was surrounded by some space before the terraced rows of seats began, and the groundlings stood, crowded together, on the bare earth, pushed right up against the stage.

They were the common folk, known as ‘stinkards’ and ‘penny-stinkers.’ There were obvious reasons for that. The word ‘groundlings’ was actually the name of a small fish with a large, gaping mouth. The area where they stood was known as ‘the pit’ or ‘the yard.’ You only paid a penny, but then you had to stand, usually uncomfortably, and often in the pouring rain, crushed against other people, to watch the play.

In Shakespeare’s play, Hamlet, the prince commissions a group of visiting actors to perform a play at court. Before they begin he gives them some acting advice. In the course of that advice Hamlet says: ‘O, it offends me to the soul to hear a robustious periwig-pated fellow tear a passion to tatters, to very rags, to split the ears of the groundlings.’ This is the one and only time that the word ‘groundlings’ appears in Shakespeare’s works.

Shakespeare was an actor and, while we almost never see anything in his plays that can give us a clue about how he felt about things in the real life around him, in this piece of advice to the players in act 3 scene 2, we see what may well have been some of Shakespeare’s views about acting methods. As Shakespeare stood on the stage, looking down at the penny-stinkers, they may have looked to him like gaping fish as they stared open-mouthed, up at him, thus the metaphor – the word ‘groundling’ – in Hamlet’s advice to the actors. 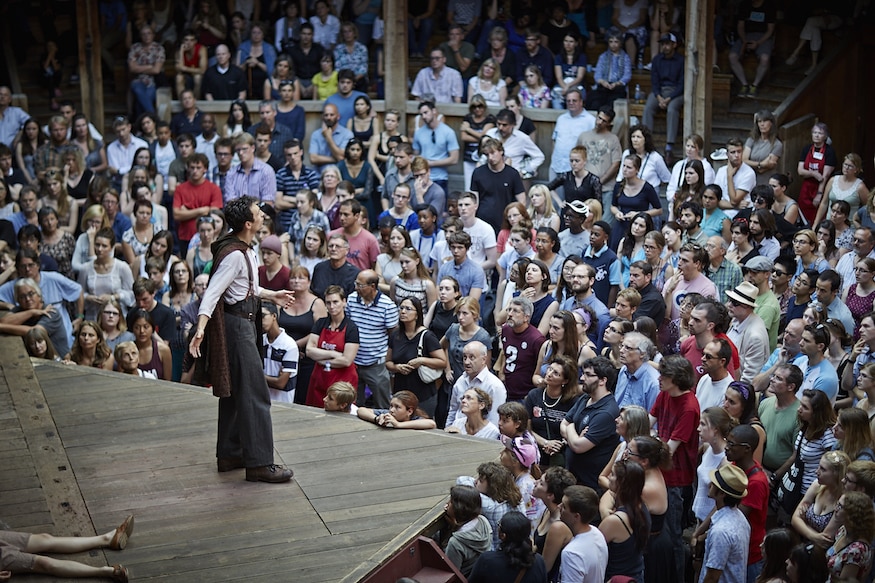 These common folk constituted a large proportion of the audience at any performance. All of Shakespeare’s plays, no matter how serious, how philosophical, how ‘educated,’ had something for these people. Shakespeare’s plays were notable for their wide range of appeal, including crude jokes, slapstick burlesque, lower-class characters, as much as refined emotions, intellectual ideas and monarchs.

The groundlings had to be entertained throughout so the playwrights had to tread a fine line, making sure that they didn’t get bored. People brought their lunch with them and ate it during the performance. If there was anything they didn’t like, or if they got bored with a long speech, they would jeer and boo and throw food at the actors. It was a completely different attitude to the one we have today, where it would be extremely bad-mannered to shout at the actors, and you would probably be arrested if you threw anything at them.

If you disdained the groundlings and didn’t want to be one of them it became a quite expensive business. Further away from the stage there were several galleries. If you paid another penny you could stand on the first level of the galleries, where it was less crowded. Another penny and you go in by a separate entrance and get a seat. If you were rich you could actually sit on the stage, on a seat with a cushion. You could be seen there by the audience, and use the opportunity to show off your fine clothes. Elizabethans were even keener on demonstrating their wealth than the rich people of our own time. But by the time you got to sit on the stage, you will have paid ten times the ticket price paid by the groundlings, about what a groundling needed to support his family for a week.

Why Is The Structure of Shakespeare’s ‘The Winter’s Tale’...
Scroll to top