The Sam Wanamaker Playhouse’s Hamlet could be termed “a play by Sean Holmes, based on an idea by William Shakespeare” for all the connection Holmes’s production has to Shakespeare’s text and the spirit of his text.

If accepted in that way it is a pleasant, if too extended, evening at the theatre. It is full of fun and jokes, including one from the gravedigger about COVID parties in Downing Street.

Holmes seems to have scoured the text for comic opportunities, of which there are many in the original text, such as Hamlet’s goading of Polonius and Rosencrantz and Guildenstern, and the hilarious scene with Osric. However, strangely, he plays those scenes down – cuts some of them and rushes through what he has left of them. The result is that the scene with the ridiculous Osric – probably the most fully realised of all Shakespeare’s minor characters – is virtually bypassed.

Holmes downplays all the dramatic scenes, like the scene in Gertrude’s room and the killing of Polonius, the scene in the graveyard where Hamlet and Laertes fight over the body of Ophelia (which at that point is not a body but ashes in a crematorium urn), and, most of all, the final scene. Generally, Death lays a very light finger on this version of the play.

Instead, Holmes wrings the text for laughter. But even there, apart from the scene with Osrick, although the gravedigger scene is very funny in Shakespeare’s text Holmes dismisses it all and has the gravedigger, joined by a straight man, a modern priest smoking a cigarette, treating the audience to a twenty-first century stand-up comedy act, devised either by Holmes or the actor, Ed Gaughan, and nothing whatsoever to do with Shakespeare. Gaughan also entertains us throughout the performance, singing while strumming on a guitar. 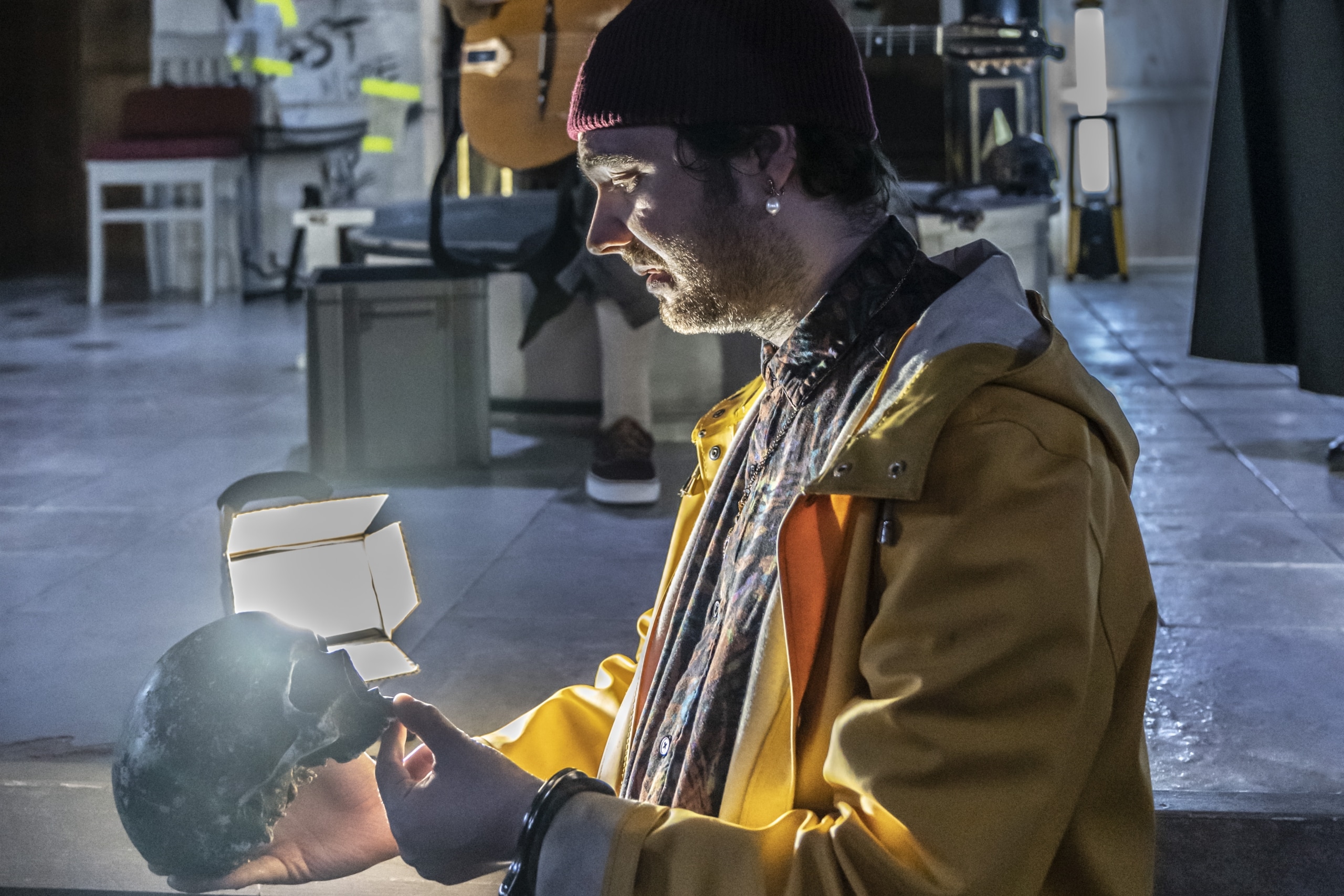 But even if Holmes’s approach of using the Shakespeare text as a jumping-off place for a new play were acceptable – which it could be if well done – a lot of it doesn’t make sense in this production. Why does Holmes swap Ophelia’s final words for extracts from Romeo and Juliet? Why does Hamlet, unlike his mother and uncle, his friends and companions, his father’s ghost, have a broad Brummie accent? Why does every character who dies have to be put down a well and emerge soaking wet? What is the logic of the costumes? They range from the ghost’s Roman soldier outfit, through Claudius’ and Gertrude’s Renaissance royal garments, to Ophelia’s jeans and shorts and Hamlet’s emo selection. You can’t get an understanding of any of that from the dynamic of the Holmes text or the performance – you would have to ask Sean Holmes.

George Fouracres, last seen in one of Shakespeare’s best comic roles – Sir Andrew Aguecheeck – at the Globe, made an indelible mark with a brilliant performance in its Twelfth Night last year. He is the consummate comic actor and, as such, saves this production, which, with this concept, would otherwise be in danger of failure. He is engaging, and reveals what is there in the Shakespeare text – the high intelligence and sense of humour of the protagonist, something that Hamlet can’t suppress in the Shakespeare text, even in his darkest moments, and he entertains us throughout. And he is unfailingly funny.

The darkness in the Shakespeare text is not there in this production though. Not on the stage anyway. Instead of the profound questioning of existence that Shakespeare’s protagonist goes in for, most of which is embedded in the soliloquies, Fouracres distances himself from it, even making jokes in the middle of the most serious and profound musings ever written, as though not wanting to share his inner self with the audience as Shakespeare intended. Instead, he covers the walls with graffiti – detailed outpourings – while we are not looking. We come back from the interval to find that he’s been busy doing that. Accomplished actor as he is, Fouracres is nevertheless not fully comfortable in this part, seeming to be going along with Holmes’s experiment somewhat against his better judgment.

It’s a pity that Rachel Hannah Clarke, another accomplished actor, is not allowed to actually play the part written for Ophelia – much of her role has disappeared and all her “best bits” have been cut out. Polly Frame’s Gertrude is also somewhat curtailed but she asserts herself in the final scene by being drunk. Claudius– a potential tragic protagonist – loses his menace in Irfan Shamji’s portrayal of Claudius as a fun-loving lightweight, missing the opportunity of making the “O my offence is rank/ it smells to heaven” soliloquy hit the spot. John Lightbody is a cool, younger Polonius whose pomposity is replaced with a quiet dignity that belies his underlying nastiness.

It’s impossible to make a judgment about this production because it’s hard to know what it is. However, it is fun. Audience laughter ripples throughout and the calls for audience participation are irresistible. But after three hours and we are not even in the final scene one is beginning to think about bed and wondering whether the tube will still be running by the time one finally gets out of the cramped (although beautiful) theatre.

Is It Time To Cancel Shakespeare?

Are You Calling Shakespeare A Thief?
Scroll to top