You are here: Home1 / Welcome To The No Sweat Shakespeare Blog!2 / Historic Shakespeare3 / The Hamlet Skull Scene: Symbolism & Significance

In this article, we’re going explore the significance of this scene and explain what is all means – the context, whose skull it is, allusion in the scene, and symbolic references to the skull and death in the play.

Where does the skull appear in Shakespeare’s Hamlet?

The skull appears in Act 5, Scene 1 of Hamlet. This scene, commonly known as the “gravedigger scene”, was used by Shakespeare to create some comic relief in the tragic Hamlet plot.

Generally, comic relief is meant to lessen the dramatic tension, and to give some sort of relief to the audience by injecting humorous or ironic elements into the play. But, in the case of Shakespeare’s tragedies, the comic relief is more than first meets the eye.

Like in Hamlet, the gravedigger scene uses comedy to comment on larger issues regarding life, death, and Christianity. This portion of this scene where Hamlet is conversing with a skull introduces much complexity. Hamlet’s monologue centered on the skull revolves closely around the vanity of life and the existential crisis within a man. 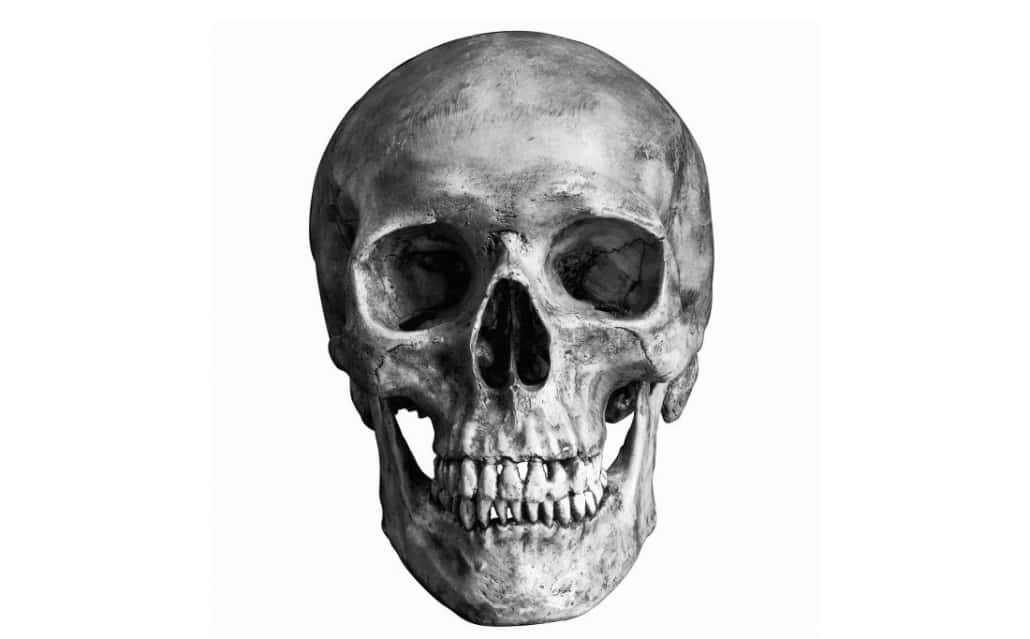 Yorick’s skull from the gravedigger scene

How is the skull discovered?

The famous skull is first introduced to the play by a gravedigger, who is helping to prepare a grave for recently dead Ophelia.

Suddenly, Hamlet and Horatio enter the scene. They are crossing the graveyard, and, seeing two gravediggers working, they stop to talk with them. During the conversation, one gravedigger shows the skull to Hamlet. Thereafter Hamlet takes the skull from him and starts to brood upon it in the play.

Let’s have a look at the actual conversation between Hamlet and the gravedigger, made famous by Hamlet’s ‘Alas, poor Yorick’ line:

Gravedigger: (indicates a skull) Here’s a skull now. This skull has lain in the earth three-and-twenty years.
Hamlet: Whose was it?
Gravedigger: A whoreson mad fellow’s it was. Whose do you think it was?
Hamlet: Nay, I know not.
Gravedigger: A pestilence on him for a mad rogue! He poured a flagon of Rhenish on my head once. This same skull, sir, was Yorick’s skull, the king’s jester.
Hamlet: Let me see. (takes the skull) Alas, poor Yorick! I knew him,Horatio, a fellow of infinite jest, of most excellent fancy. He hath borne me on his back a thousand times, and now, how abhorred in my imagination it is! My gorge rises at it. Here hung those lips that I have kissed I know not how oft. —Where be your gibes now? Your gambols? Your songs? Your flashes of merriment that were wont to set the table on a roar? Not one now to mock your own grinning? Quite chapfallen? Now get you to my lady’s chamber and tell her, let her paint an inch thick, to this favor she must come. Make her laugh at that.—Prithee, Horatio, tell me one thing.

“Alas, poor Yorick! I knew him, Horatio…”. This quote expresses the relationship between the two, Hamlet and Yorick, in the protagonist’s childhood. His old mate’s skull reminds him of his own existence as well as his past. It also sparks some deeper questions in Hamlet’s mind. 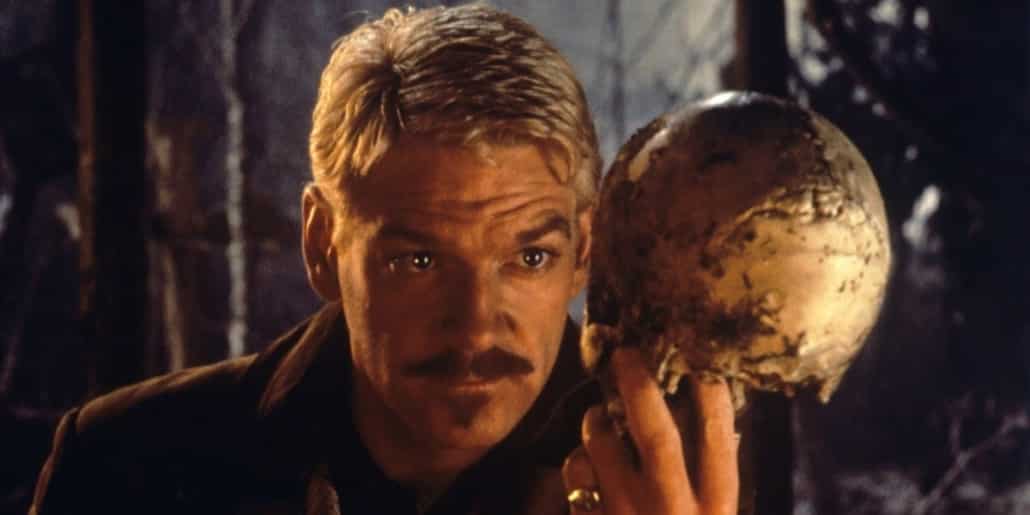 Who is Yorick in Hamlet? A brief overview

Yorick does not play any major role in Hamlet, but his skull does! In the Hamlet skull scene, it is Yorick’s skull that Hamlet holds as he speaks.

Yorick was the jester of the king. A jester is the shortened name of a court jester or simply a fool. In the Medieval age and the age of Renaissance, a jester entertained the royal court with his slapstick humor, doggerel verse, and funny storytelling. A jester did not hold high esteem in medieval society but he was a favorite of the royal family and the courtiers. (Read more about Shakespeare’s fools.)

The skull of Yorick was there in the graveyard for twenty-three years. The gravedigger knew him and his skull well, and refers to him as “a whoreson mad fellow”. However, Hamlet takes the skull from the gravedigger and starts to contemplate on different issues.

First of all, he introduces the character of Yorick to the audience. According to Hamlet, Yorick was “a fellow of infinite jest, of excellent fancy.” Yorick’s imagination power and his attitude of fun making were appealing to Hamlet when he was a child. In his childhood, Yorick put him on his “a thousand times” and played with him. Hamlet is sad about the death of his old playmate. The inevitability of death snatched Yorick away from poor Hamlet.

Yorick’s skull has symbolism and significance in reference to the themes Shakespeare adopted in Hamlet. Let’s look at these in more detail:

Yorick’s skull reminds the audience of the vanity of human life. Hamlet holding the skull in his hand portrays the futility of the life of the court jester Yorick. Once, he amazed the court with his genius, now lying in a lonely graveyard with others beneath his intellectual prowess. Is there any need to put extra effort into one’s life, if it imply leads to the grave?

The symbolism of life and death

The symbolic quality of Yorick’s skull is not a new thing to talk about. Shakespeare used such dramatic instruments to squeeze the symbolic essence out of it. Like the dagger in Macbeth and the skull in Hamlet. Yorick’s skull in the Hamlet skull scene is a symbol of death, the ultimate destination of life. Hamlet holding the skull represents the duality of life and death. Hamlet symbolizing life, the skull in his hand portraying death. It is just a hand’s distance between them!

“The paths of glory lead but to the grave.”

“The boast of heraldry, the pomp of pow’r,
And all that beauty, all that wealth e’er gave,
Awaits alike th’ inevitable hour.
The paths of glory lead but to the grave.”

In the Hamlet skull scene, Yorick’s skull puts Hamlet in an existential crisis. Hamlet is reminded of his own existence by the decaying old skull. Hamlet thinks about Alexander the Great and Julius Caesar after seeing the skull. They had achieved a lot, but still ended up being dust particles. Hamlet’s existence in this world is just like the dust, it shifts from the passages of time, and takes new embodiments. The skull drives Hamlet to brood over how futile his life is.

The human body as a rotten warehouse

The Hamlet skull scene has another symbolic yet ironic reference to the human body. Yorick’s decaying and foul-smelling skull presents the image of a human body that is rotting. It stores different ideals, physical glamour, and, most precious of all, our soul. At the end of the day, when the bird comes out to fly, it starts to rot like a potato. Hamlet refers to it by the smell of the skull and his statement about Ophelia’s makeup:

Now get you to my lady’s chamber and tell her, let her paint an inch thick, to this favour she must come.

What does the skull represent in Hamlet?

Yorick’s skull in the Hamlet skull scene/gravediggers scene symbolizes the futility of life, the inevitability of death, and the vanity of the human body.

What does Hamlet say to Yorick’s skull?

In the Hamlet skull scene, after taking Yorick’s skull from the gravedigger says, “Alas, poor Yorick! I knew him, Horatio…” Thereafter he recollects briefly his childhood episode of Yorick and him playing together.

Why does Shakespeare have a skull?

In the Hamlet skull scene, William Shakespeare implements Yorick’s skull as a dramatic instrument. It represents the theme of “memento mori” and forms the dramatic basis of the play. Using the skull, Shakespeare portrays the futility of life and inevitability of death symbolically.

What happened to Yorick?

Yorick died twenty-three years ago in William Shakespeare’s Hamlet. According to the plot of the play, Yorick was a jester at the king’s court. He was also well acquainted with the prince, Hamlet. They both played and enjoyed together in Hamlet’s childhood days. In the Hamlet skull scene, Hamlet holds Yorick’s skull and contemplates on the vanity of his own life.