You are here: Home1 / Welcome To The No Sweat Shakespeare Blog!2 / Reviews3 / Henry V Review, The Globe Theatre 2022

This is a very intelligent working of Shakespeare’s text. That’s the first thing to say, and the second is that Oliver Johnstone’s performance as Henry is outstanding.

To turn a centuries-old interpretation of a Shakespeare play on its head without taking liberties with the text is unusual but it happens here. The English king who has the most claim to being a ‘good’ king and a ‘good’ man, a reputation gained mainly as a result of the depiction of him in Shakespeare’s play, becomes an angry and emotional toddler, weeping and screaming by turns. He terrifies his supporters with his instability and unpredictability, skating on the thin edge of sanity, and coming across as threatening and dangerous. The traditional view of him as a young man who becomes king after learning how to be human by scorning the trappings of regnal power and associating with the underbelly of London, thus emerging as a judicious, wise, humane adult, and therefore a great king, is subverted. In this production Henry is more like a Donald Trump than a Nelson Mandela. 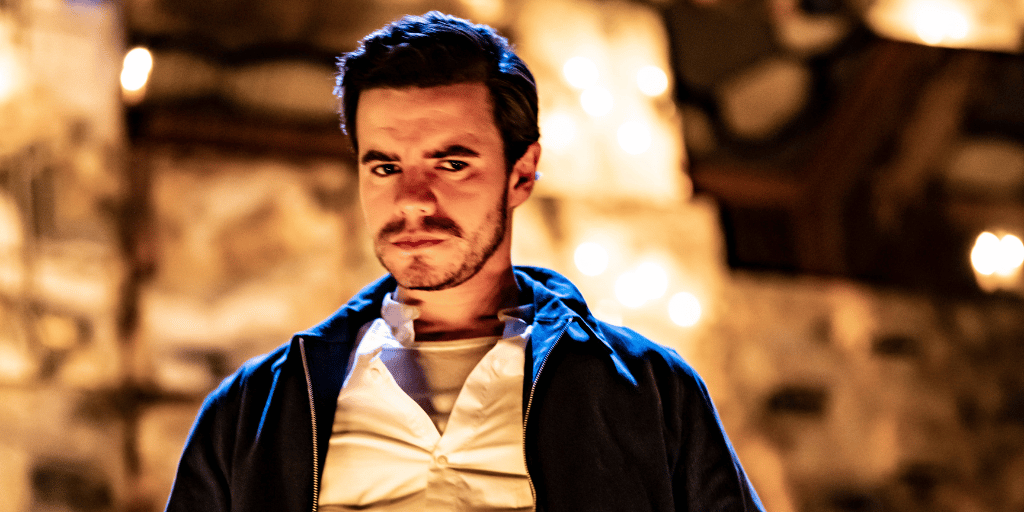 How does Holly Race Roughan achieve this transformation?

First, she dispenses with the chorus, whose job is to praise Harry of England as the perfect English king, the king of kings. Instead of the Prologue’s rousing introduction with its extreme images of kingship and patriotism the play opens with the scene from Henry IV Part II in which the dying Henry IV wakes to find his son Prince Hal at his bedside, trying on the crown. The Chorus is subsequently omitted altogether from the performance. Occasions where patriotism is called for are accompanied by the ironic singing of ‘God Save the King’ by a court brutalised and constantly wrong-footed by their new monarch.

We see the ‘warlike’ Harry’s desire to attack France but he has no reason for it and it is only when insulted by the Dauphin – sending him a gift of tennis balls, suggesting that he’s not a serious king but more of a playboy – that he makes his decision, driven by the petty need to ‘get him back’ and show him what’s what than by anything else. In the text we see him ordering the execution of traitors  – a swift decisive, act – but here he personally strangles Scroop onstage with his bare hands. This unexpected and shocking execution is a breathtaking theatrical moment, but more than that, it conditions the audience to what is to come – instability, unpredictability and cruelty.

When anticipating going to see a performance of Henry V we usually look forward to two speeches in particular – two of Shakespeare’s best – and here the ‘Once more unto the breach dear friends’ speech is turned into a soliloquy. Not only that but delivered while crouching in a foetal position, all alone on the stage, instead of the rousing, morale-lifting encouragement to his troops it becomes a man having a panic attack, battling against feelings of insecurity. The St Crispins Day speech is delivered only to a small group of his inner circle and is transformed from a patriotic rally to a complaint about the inadequacy of his troops. So we do not have the two usual expressions of great leadership but just by changing the staging of the speeches, quite the opposite.

The diplomatic negotiations are also transformed. Henry’s deal-making is like Don Corleone’s, making the French king an offer he can’t refuse. But the piece de resistance is the courting scene with Princess Katherine. What we have enjoyed in this scene before is a charming and gentle Henry and a flirtatious and interested Princess. Without any alteration of the text, we now have Henry as a bullying, frightening sex fiend who actually makes an unwanted sexual attack on the princess, and instead of a delighted, receptive young woman, what we see is a terrified victim. It’s a remarkable and shocking scene, effected by two superb actors.

In Shakespeare’s history plays it is the story and the condition of kingship that has interested him up to this point but in Henry V he is interested in both the condition of kingship and the character of the king rather than only the story and the ideas it produces. And so, from his pen comes an apparent story of a thoughtful and judicious king who takes kingship seriously and is able to avoid the mistakes and pitfalls of his predecessors. Henry does that but encounters different problems. In the traditional way of looking at it he deals with all that and emerges as the master of kingship, but in this production his personal weaknesses – his insecurity and narcissism – make him an unpleasant dictator that we would run from rather than follow.

This interpretation requires the highest quality of acting by the main character. Congratulations to Oliver Johnstone as one of the best that the Globe has offered for a long time. He builds and maintains a totally convincing portrait of this complex character.

The supporting players are all excellent although one, Josephine Callies, as Katherine, stands out. In her, we feel what it’s actually like to be the victim of a cruel, merciless attacker. One could say that the huge list of characters being played by such a small group, constantly changing rolls, becomes a bit confusing, but in the scheme of things, in such a fascinating performance of the play generally,  and with the focus so firmly on the central character, that’s relatively unimportant. What is important is Ms Roughan’s demonstration of the universal nature of Shakespeare’s work, which defies anyone to pin down a definitive interpretation of even such a sure bet as his Henry V.

Midsummer Mechanicals Review, The Sam Wanamaker Theatre At The Globe, 2022