How To Write An Elizabethan Play

You are here: Home1 / Welcome To The No Sweat Shakespeare Blog!2 / Random Fun Stuff3 / How To Write An Elizabethan Play

There were no theatres in London when Shakespeare was born. The first purpose-built theatre, simply named ‘The Theatre,’ opened when he was 12.  It was so popular that others were built, and when young Will arrived in London in 1589 there were about twenty. Going to the theatre had become the most popular leisure activity in London.

The theatres were full every day. Each one had a team of very highly paid writers, who worked together and had little leisure time, as the playgoers were insatiable. A theatre would stage three or four, or even five, plays a week, so there was no place for a writer who didn’t pull his weight.

And so during the decade during which Will was growing from a teenager into a young man in Stratford this new London phenomenon was mushrooming. And it was new. Very new. It was new in that acting companies had until then put on plays wherever they could – in inns and taverns, in courtyards – but mainly in the provinces, where they would seek permission from the High Bailiff (the Mayor) of county towns to perform in a civic building like the town hall or the guildhall, and sometimes they would perform in the great houses of dukes and earls, but now they had a base, where they could perform without all the hassle of travelling from place to place, quite often having their application to perform declined, and having to move on.

London theatre was also new in the sense that the plays were a new genre. They were written by young men who were full of ideas, who took plays right out of the classical realm and set them squarely in the everyday world of modern Londoners. They learnt, as they wrote, what the people liked – not dreary Greek dramas or flat morality stories, but exciting, funny, sexy, violent stories they could connect with.

What we think of as the Golden Age of English drama is actually the first age of English drama. And what a start! When we look back we find countless names that still live, and will live forever – names like Christopher Marlowe, Ben Jonson, John Fletcher, Thomas Dekker, Thomas Kyd, Robert Greene, not to mention William Rowley, Thomas Middleton, Michael Drayton, Francis Beaumont, George Chapman, Henry Chettle, and William Shakespeare – it would be impossible to exhaust such a list.

They were playwrights, with the emphasis on “wright” which means a maker of something, like a wheelwright or wainwright (maker of wagons). Those writers did not think of themselves as ‘writing’ when they were writing plays, they thought of themselves as ‘making’ plays.

To them, writing plays was a different activity from the other writing they did. They went into playwrighting for the money. They were mainly university-educated – either Oxford or Cambridge – and there were several professions open to them – schoolmastering, tutoring, the church, but they were all very good writers, with the mentality of writers,  and none of those would have suited them. Some were poets, some pamphleteers, some translators, some satirists, some scholarly writers, but there was no money in any of that. It was all very well to have a book published but there were too few people who could read for a book to bring in any kind of income.

The theatre, crowded every day, was full of people who couldn’t read, and that’s where the money was. At a time when schoolmasters were earning about £10 – 12 per annum, worth about £2,500 in 2020, and writers who were publishing works averaging about £5 per annum, a playwright would be paid about £5  for his contribution to a play, and sometimes more if he was leading the team, and would frequently be involved in seven or eight plays in a year.  Michael Drayton, now regarded as a major English poet earned, according to Henslowe’s journal, more than £35 for his contribution to plays in a period of ten months during 1598-9. That was more or less standard, but it meant that if you slacked you would be thrown out and someone eagerly waiting for an opening as a playwright would be brought in. Drayton was also publishing his poems but getting very little money from that.

Very few of those writers made it into his forties: life expectancy was around 33 in the wider community, and the lifestyle of a playwright was such that it often meant an early grave, with premature death coming as a result of alcohol or venereal infection. Marlowe was murdered at the age of 29: Shakespeare died aged 52, so at that age he was an old man. All of the writers Shakespeare worked with on his first effort, Henry VI, Part 2 – Marlowe, Kyd,  Greene, Nashe, 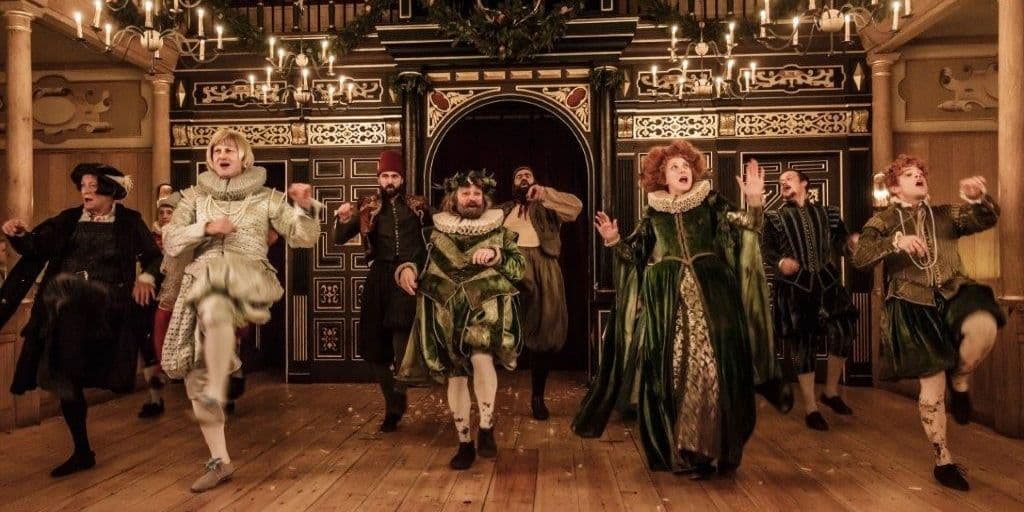 Elizabethan play at The Globe Theatre

and Peele – were dead less than 10 years later.

The plays, even such greats as Macbeth and Romeo and Juliet, were collaborations, although, as Shakespeare began to dominate the scene his role became increasingly major in making a play. In that position, he had more control over the plot and wrote more of the dialogue. The standard method was that one of the writers would bring a story – it could be about anything, from an historical character, or a Roman scene, to a funny story someone had heard – and write a general scheme or plot, modernising the story and its characters. The story would be divided among the participating writers and each one would go off and write the dialogue for his bit, then someone would edit it, iron out the enigmas, and try to make it flow, then it would be handed to the actors and they would start ‘writing the next play. Sometimes a writer would be working on two or three plays at the same time.

Shakespeare worked hard throughout his career, not only “wrighting” – he was also a full-time actor and theatre manager. When he retired to Stratford he still went to London to be present at performances of his plays at the royal court, but he also met with young writers and did some writing with them.

Shakespeare was all about theatre. We see him as the greatest dramatist, the greatest poet, but the nitty-gritty of the theatre was in his blood, and poet, playwright, businessman, investor he may have been but above all things he was a man of the theatre.