You are here: Home1 / Welcome To The No Sweat Shakespeare Blog!2 / Historic Shakespeare3 / Juliet’s Balcony, Verona

Shakespeare’s stories are so rooted in real life that it is sometimes difficult to distinguish between fact and fiction – just take ‘Juliet’s balcony‘. Although Shakespeare never visited Verona and his characters in Romeo & Juliet never existed, there is a 13th Century house in Verona where Juliet is said to have lived.

It once belonged to the Capello family for many years. This house, a former inn, is now known as the Casa di Giulietta (Juliet’s House) and is one of Verona’s main tourist attractions. The combination of the similar name to Capulet and the fact that it has a balcony that looks out over a courtyard has turned it into ‘Juliet’ balcony’ – the actual balcony where Romeo and Juliet began to plan the events that led to their tragic deaths. 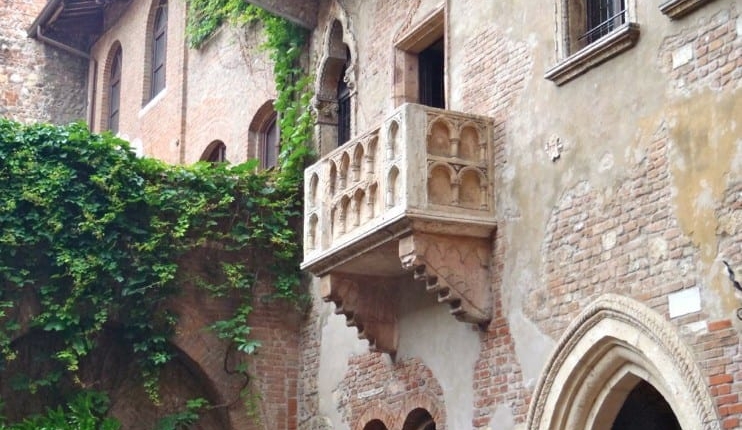 There is also a bronze statue of Juliet in the courtyard of Casa di Giulietta, proving that she did, indeed, exist! 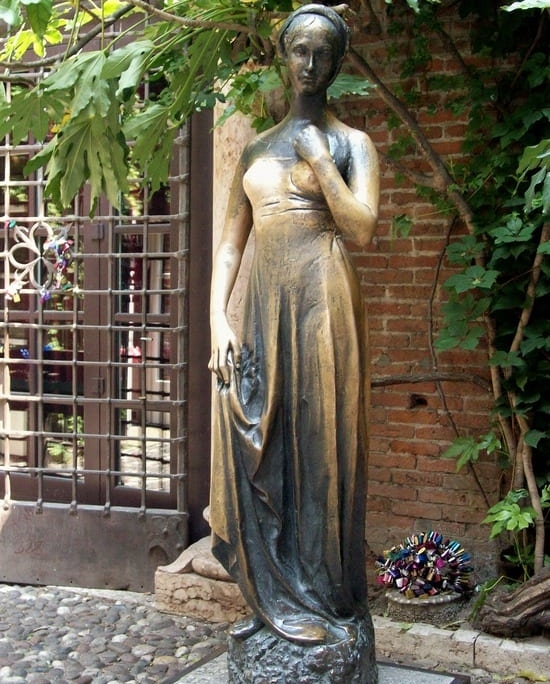 All tourists to Verona are steered to the site, and it’s particularly associated with honeymoon couples and young lovers. A tradition has developed that if they leave a message with their names on it Juliet will cast a lucky spell on them and their love will last for eternity.

There’s a problem with this, however. The lovers stick their notes on to the brick wall beneath Juliet’s balcony and usually use chewing gum. The house belongs to the World Heritage Trust, who are concerned about the unsightly mess of hardened blobs of gum and tattered scraps of paper that are defacing the building. The Verona city council have drawn up a decree banning the sticking of notes on the walls and also the consumption of food on the premises, but as a long tradition the Council are finding it difficult to suppress – even with a 500 Euro fine for anyone found sticking anything to the walls! In the meantime removable wooden panels are in place with an invitation to the lovers to post their messages there.

Take Some Advice From Club Di Giulietta, Opposite Juliet’s Balcony

Across the street from Juliet’s House in Verona, right opposite Juliet’s Balcony, is an office where a team of writers work all day long answering letters to Juliet, asking her advice on matters of the heart. They call themselves the Secretaries of Juliet.

The letters seeking advice on relationships or asking Juliet to bless their relationships arrive by the sack load. Some are written on paper burnt and smeared with mud to look like medieval parchment, while others are accompanied by photographs and drawings.

It all began in the 1950s, when a custodian of Juliet’s symbolic tomb, also in Verona, began responding to letters and notes that tourists left behind. When he retired, the tradition was continued by a succession of volunteers, until the late 1980s when city authorities asked the “Club di Giulietta” (The Juliet Club) to take over. And they are still working on it, dealing with the love issues of people from their teens to their old age.

Some examples show that there’s a kind of celebratory wish to share a love with Juliet:

Dear Juliet, I am in love and have never been so happy. We are getting married at the end of the month. Will you please bless our marriage?

Others ask the impossible:

Dear Juliet, two men want to marry me. Pete is a lovely guy, very sweet and generous, and gentle and loving to me. My parents adore him and are hoping I will choose him. Gareth is a ‘bad boy’ and has actually spent time in a correction facility. My parents would like to ban him from our house and just get up and walk out of the room when he comes round. But I find him exciting and when I am with him I feel high all the time. He is sometimes quite rude to me in public but then he takes me in his arms and all the hurt goes away. Please help me Juliet. Please tell me which one I should marry.

The interesting thing about it is that the people who write to Juliet really do think they are writing to a real person – the fourteen year old who lost her life through making the wrong decisions in her own attempt to deal with the difficult question of love.

Juliet never existed, but there is a sense in which all of Shakespeare’s characters are as real as the people we encounter in our daily lives.

Planning a trip to Verona?

We’ve pulled together some of the very best Verona resources from travel writers and websites below:

One day in Verona? Here’s what to do according to Passion for Hospitality

A guide to Verona courtesy of TravelPassionate

Restaurants in Verona from The Midnight Blue Elephant

Day trip to Verona, as taken by The World Was Here First

It’s Not About The Miles say that visiting Juliet’s balcony is just one of many things to do in Verona if you enjoy history and culture.

How Was Shakespeare’s Name Spelled?