You are here: Home1 / Welcome To The No Sweat Shakespeare Blog!2 / Reviews3 / King Lear Review, The Globe Theatre 2022

King Lear has been called Shakespeare’s greatest play. It has also been said that it’s impossible to make it work on the stage. Those contradictory statements may both be true.

On the one hand, if the text is studied as a work of literature, which it is in many introductory Shakespeare courses in colleges and universities around the world, one can only marvel at Shakespeare’s genius. The poetic unity, the characterisation, the dramatic structures, are all master classes in creative writing, even to the invention of stream-of consciousness – four centuries before James Joyce – in Lear’s ravings on the blasted heath, and to several features of .twentieth century postmodern fiction.

On the other hand, as a stage play, it threatens at every turn to fall apart. Like most great literary and dramatic works, such as Anna Karenina, Pride and Prejudice, A Long Day’s Journey into Night and the film, The Godfather, it is a family drama – in this case, two family dramas. They are both fascinating stories and the action moves almost equally between the two. Each one is a powerful story that focuses on the family’s father. Each story is crammed with deep and serious issues and they are presented in instalments, with an instalment of the Lear story followed by one of the Gloucester stories, then back each time to the other story. Plays work by making an emotional impact on the viewer but in this case it is emotional confusion. Lear is out on the blasted heath. We have just caught up with him but now we are to put him on hold as we get back to Gloucester’s story. And then to be left up in the air with Gloucester to return to Lear. Each one builds audience emotion up then moves away to another build-up, allowing the emotions to cool on the other one. Confusing. How does a person respond? It’s difficult in a play. It works in novels but in plays? Does it? 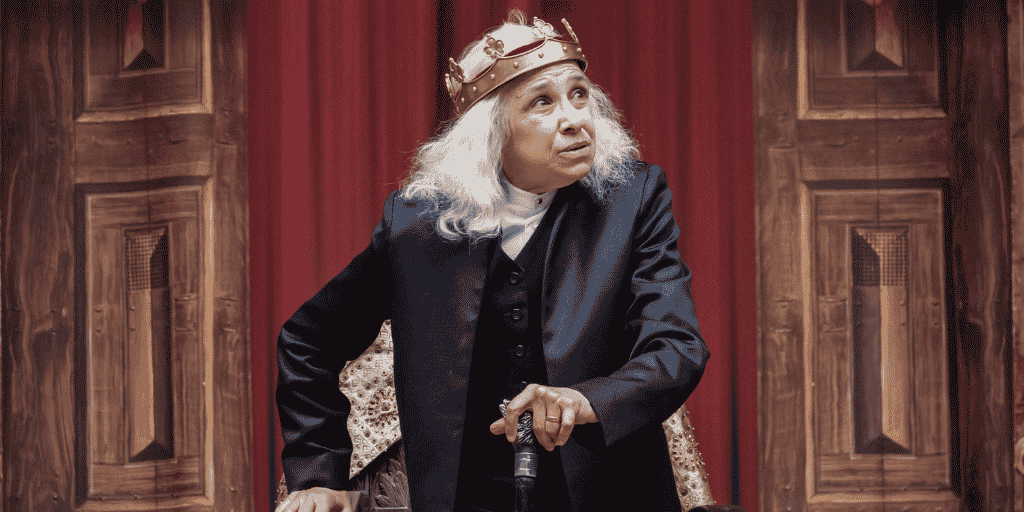 It is the director’s job to resolve that structural problem and Helena Kaut-Howson hasn’t. That makes it difficult to identify with Lear. And it is that question of emotional identity that may be the cause of the failure of this production. Given that difficulty, the actors playing Lear and Gloucester also have a big job to do to find ways of making the play work. It is that issue that should be the main conversation between director and actors as the performance is being developed but it doesn’t look like it was discussed at all.

In this performance Diego Matamoros’ Gloucester emerges as more convincing, emotionally, than Katheryn Hunter’s Lear. His pain, his suffering, his realisation of the condition that has afflicted him as the patriarch of his noble family is convincing. “I stumbled when I saw” he admits as he reviews his life. Gloucester has an unbeatable moment, perhaps unbeatable in all of Shakespeare, when he has his eyes pulled out by Cornwall. Matamoros’ performance doesn’t suffer by the inexplicable audience laughter at that horrific event. It’s difficult to understand what there was in that moment that evoked it but surely playing it for laughs wasn’t planned by Ms Kaut-Howson or any of the actors in that scene? If it wasn’t it is something for them to look at for subsequent performances. If it was deliberate it’s inexplicable.

Also difficult to understand is what statement, if any, Helena Kaut-Howson, is making in directing this play. At this stage of theatrical development in the UK we expect a statement, but we don’t seem to have one here.

Kathryn Hunter is a huge star and netting her is a coup for The Globe, and after such great anticipation Lear’s entrance is promising. Lear, the all-powerful absolute monarch, arrives at court in a wheelchair and he’s very old, as directed by Shakespeare, and he’s pale, sickly-looking and tiny. When he stands up his daughter, Regan, helps him and she towers over him like a giant. It looks like anyone at court could lift him with one hand and fling him over their shoulder. Interesting: after all, political and personal power does not depend on physical appearance and size. Look at Napoleon and Hitler – both small men. How wonderful it would have been if Ms Hunter’s Lear had the charisma that the text clearly demands, in spite of her physical stature. It’s no wonder actors are in awe of the role. They have to present a convincing combination of charisma, narcissism and dementia with immense emotional power. That seems to be out of Kathryn Hunter’s reach.

What we have is a pathetic old man. The rage and passion and angry questioning called for in the text are just not there. Shakespeare has provided the language for those things by writing the loudly uttered emotions of a man already frustrated by dementia, but that bountiful gift is wasted. For example, the ‘nothing’ interplay between Lear and Cordelia is a swelling duet that gets louder and angrier until in an apoplectic rage Lear banishes his favourite daughter, but it is underplayed here to become a quiet casual incident with the banishment seeming like an evenly judged, considered decision. And then, on the blasted heath, Ms Hunter’s delivery doesn’t convey the extreme emotions the language asks for.

Lear gives everything that makes him a king away without the wisdom to understand that if you do that you can’t expect to keep control of things, and people are not going to treat you as they did when you had all the power. He has lived his whole life in hiding behind things like position, power and wealth. Now he doesn’t know who he is and he keeps asking the question, howling against a deafening storm. Who and what he is is what he has to learn.  He doesn’t know how to react. He undergoes a huge mental storm with a lot of raging and shouting, and then there is a complete contrast to that as he wakes to music to find the noise of the storm gone from his brain. He emerges with an understanding that eluded him when he held power. Without the trappings of power he is now, personally, “every inch a king.” It’s like a Beethoven symphony, with noisy violent passion and then a resolution – lightness and harmony, and catharsis. There’s none of that contrast here. One cannot say that Kathryn Hunter has misinterpreted the role but one can certainly say that her interpretation doesn’t work – she does not connect with the emotions of the audience. That is not helped by inadequate voice projection, where she can hardly be heard much of the time, a difficulty shared by several of the cast.

Generally, this is a, traditional presentation of the drama, without anything innovative apart from the squeezing of humour from the text and adding things like making the first impression of the frail, demented Lear of him playing a child’s tune on a whistle, with laughter from the audience. The actors are all competent, none standing out, apart from Matamoros, and Michelle Terry as the Fool who, made up as Joker in Batman, provides a physical agility and mental sharpness that contrasts effectively with Lear’s frailty and vulnerability as she artfully manoeuvres herself around his mental condition. A special word for Max Keeble as Oswald as he is struck, kicked, tripped up and thrown about the stage. And congratulations to the choreographer.