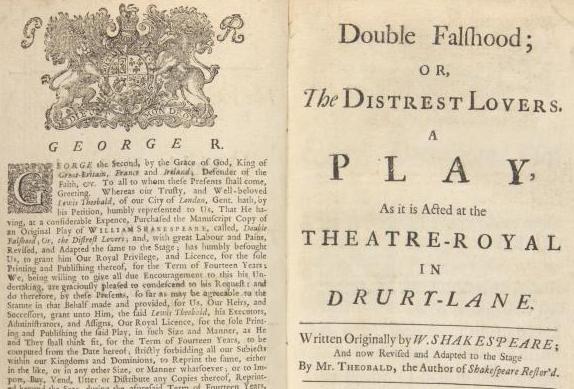 Theobald announced that he had uncovered three prompt books for the original performance of the play. He further claimed that this was the work of William Shakespeare and that he, Lewis Theobald, had reworked it and was now showing it to the world.

His assertion was met with scepticism and scorn, led by the influential poet and man of letters, Alexander Pope. And so, the appearance of this ‘discovered’ play has gone down in literary history as a hoax. The discovery of a lost Shakespeare play is the holy grail of Shakespeare scholarship and many scholars have claimed to have found one. Theobald wasn’t believed and he was dismissed out of hand.

It appears now that Shakespeare may well have been the main author, in collaboration with a writing partner. It seems, too, that it may even be the lost play, Cardenio, that we know existed, but was lost.

There is a team of scholars at the University of Texas dedicated to identifying the authorship of Elizabethan and Jacobean texts. Under the leadership of Dr Ryan Boyd the team uses software and other techniques, including their vast knowledge of the period, its people and its literature, to establish the authorship of texts. They also examine the texts themselves, looking for collaboration with other writers, and are able to make judgements on which writer wrote which sections of a text.

The software the Texans use is sophisticated. It not only analyses the physical properties of a text but explores its psychological properties and can match those with the known psychological characteristics of a writer. It has a points system by which it makes its conclusions and on this parts of Double Falsehood score highly when matched with Shakespeare’s undisputed texts and what the scholars know about Shakespeare the man.

Here’s the principle: the program is a development of software used routinely by university departments and schools to detect plagiarism by students and to analyse essays and coursework that are suspected of having not been written by the student.

It’s quite simple. In the first place the teacher will suspect the student of cheating because the teacher usually knows what the student is, and is not, capable of. The plagiarism software gains access to a vast body of documents and books that exist on the internet and looks for both copied passages and violations of intellectual property, ie. stealing someone’s ideas and presenting them as one’s own. Running the suspect text through the software shows both text and ideas that have been copied.

Essays and coursework written for the student by someone else can also be detected. In order to come to a conclusion the teacher needs samples of work done by that student under supervision, like timed essays in the classroom, test papers and any other texts known to have been produced by the student.

At this level it’s far easier than identifying a text by a literary writer. For a start, with non native English speaking foreign students the teacher often has the first piece of the puzzle in place immediately. If a student’s supervised work is full of constructions like ‘I do not find life in England that hard as in Poland,’ or ‘if we play tennis we will enjoy together,’ and the suspicious text has none, it is a strong pointer.

It may be that the student has quite legitimately gone to someone for help in polishing a final draft so subjecting it to computer analysis is the next step. The software does a lot of counting. It counts things like the frequency of short words, long words, the number of words in sentences, the variety of sentence length, sentence complexity, and so on. It picks up the use of rhetoric and irony and analyses the texts’ relative demonstration of their writers’ access to metaphor, always a telling difference between two writers. It looks at how the suspect text uses such things as dialogue, questioning, humour and similar devices and compares that with the sample texts.

At the end of the process the software presents a report as to why the suspicious text is likely to have been written by the student in question or why it could have not been.

Such software is also a very useful forensic tool in criminal investigations: for example, establishing the author of a threatening email or in cases of fraud.

It is that analytical process, but far more intricate and complex, that is used to identify the author of a literary text.

Biblical scholars have been split for a millennium on whether Paul the Apostle wrote all the Epistles credited to him. It is now universally accepted that there is a common author for just a few of them and that the letters of Paul were produced by several authors. And so, when it comes to texts by Shakespeare and his contemporaries, we can now say something about their authorship. And we find a surprising degree of collaboration everywhere. An Elizabethan theatre was like a factory with texts being passed around and often worked on by several men, each one bringing a special skill to the production of a text. Although Shakespeare wrote most of his credited plays single-handed some of them had the involvement of other writers. And, indeed, there are some plays credited to other writers that show the clear fingerprints of Shakespeare.

The Texans’ conclusion is that Double Falsehood was written by William Shakespeare and his friend and collaborator John Fletcher.  And there is a minimal input by Lewis Theobald. That exonerates Theobald because that’s what he claimed –  that it was his reworking of the Shakespeare play. He didn’t do much to the text, however, and it now stands almost as Shakespeare and Fletcher wrote it.

Ryan Boyd of the University of Texas and James Pennebaker, the co-author of the report,  closely examined Shakespeare’s use of function words (articles, prepositions, pronouns, connectives). They also looked at Shakespeare’s content categories – imagery, family references, the senses, religion – and the consistent use of phrases and linguistic constructions not found in any other author’s work. And on those measures alone they found that Shakespeare was the likely author.

But to them the clincher was what Boyd called Shakespeare’s ‘psychological signature.’ They used the most up-to-date research in psychology, which shows that some of the core features of who a person is at his/her deepest level can be revealed in the way they use language. The research shows that it really is possible to model people’s mental worlds in what they write and to understand their writing more fully from that perspective. The scholars did not rely solely on their intuition but employed it in conjunction with the text-analysing software.

The plot is typical of Shakespeare. With its complicated, entangled relationships, women disguised a men, its mixture of tragedy and comedy, achieved with assurance, the play presents itself very much as a Shakespeare play.

The scholars are undecided and divided but the play was almost certainly written by the author of King Lear and Othello and Romeo and Juliet and the other plays credited to Shakespeare. The insertions of eighteenth century passages (Theobald’s) are convincing enough evidence that Theobald’s claim that he had the text and reworked it is just.

“Exit, Pursued By A Bear”