You are here: Home1 / Welcome To The No Sweat Shakespeare Blog!2 / Reviews3 / Measure For Measure, Sam Wannamaker Playhouse: Review

Measure for Measure, running until 15th January 2022 at the Sam Wanamaker Playhouse at Shakespeare’s Globe Theatre, has been termed a “problem play” because, while it has a comic structure and other features of a Shakespeare comedy, it is a dark play, like The Merchant of Venice – also a problem play.

However, the particular form of darkness in this play is far more relevant to us today than the story of Shylock is. Sexual coercion is probably the worst crime a man can commit in this century, and to see it acted out on the stage in all its sordid detail by a very powerful, unattractive man and a very young woman with no power is horrifying. 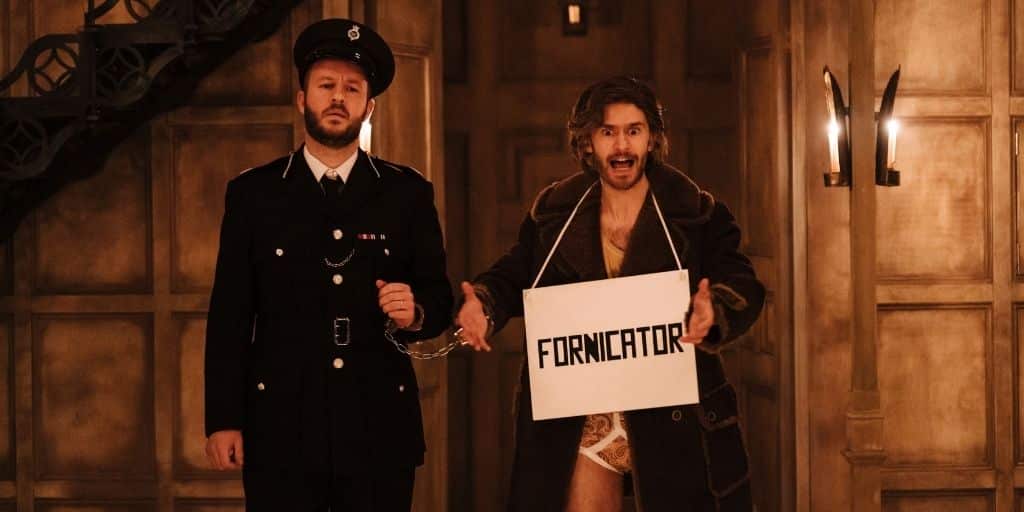 Daniel Miller as the Provost in Measure for Measure

At the same time, producer Blanche McIntyre plays it as a comedy like Shakespeare’s other comedies and succeeds. The denizens of a seedy, corrupt and morally decayed Vienna come vividly to life in a most entertaining two hour traffic to the accompaniment of much audience laughter.

Ms McIntyre does not downplay the main story though. Hattie Ladbury’s Duke Vincentio, a female actor playing a woman, disguised as the friar, Lodowick, for most of the play, does well in delivering the part but she somehow makes the Duke too likable. Vincentio is not a likable person – he (she in this case) is manipulative and controlling, and after dealing with the sexual predator, Angelo, she has her go at imposing herself on the young novice as well.

Angelo, played by Ashley Zhangazha, is as nasty as Shakespeare intended him to be – cold cruel, aloof and sexually voracious and merciless. Perhaps the most shocking scene in the play for the modern audience is the one where only the two are on the stage, where Angelo propositions the extremely young, vulnerable woman who is trapped in a situation which he could easily release her from but uses to satisfy his lust instead, And it is in this scene, too, that we are overwhelmed by his hypocrisy.

Georgia Landers is exactly right as Isabella – unassuming but passionate, loving her brother but remaining strong in her integrity, a refreshing contrast to the moral degeneration all around her – all perfectly realised. Claudio’s description of how he imagines what it’s like to be dead is a chilling appeal but she remains resolute. That her brother should ask and expect her to sacrifice her virginity to save his life is shocking to her.

The minor characters inhabit the dark, tenuous and chaotic world of the 1970s three day week, operating in semi-darkness, with constant power cuts: citizens who have to use candles, torches and other devices. The Sam Wanamaker Playhouse doesn’t use stage lighting and the action takes place around several moveable candle chandeliers, fixtures of the theatre, forcing directors to be creative in using them for lighting effects. In this case it is the effective creation of a dark Vienna – London – that has seen better days.

The play’s text is full of jokes and funny exchanges and in this production the actors milk it for all it’s worth, including shocking but funny jokes about executions and decapitations, highlighting the jokes that are already in Shakespeare’s texts with props and creative theatricals.

In most of Shakespeare’s comedies there is a “wise clown” commentator, and here we have the fast-talking Pompey, played brilliantly by Eloise Secker, in one scene hilariously dodging a threatening dildo that’s chasing her. Ishia Bennison’s drunken prisoner, Barnadine, refusing execution while he’s too drunk to enjoy it, and ending up being pushed down a trapdoor, is a treat that has the audience roaring. Daniel Miller playing both the Provost and Elbow, dressed as a 1970s policeman in both roles is hilarious as Elbow, who spends most of his time on stage grappling with a loudhailer that has a mind of its own, while attempting to assert an authority that he has no chance of mustering.

It is that treatment of the Viennese underbelly, and its comic impingement on the main story that reminds us that this play is a comedy. But regarding the main story, this production doesn’t quite hit the perfection mark. For Ms McIntyre, like for so many other producers of this play, the final scene is elusive. This is Shakespeare’s doing, and it’s as though he was satirising his own comedies. He makes that scene very hard to interpret. Most of the comedies end with a joyous coupling of lovers, but here he warps that into a seriously joyless coupling, apart from Claudio and Juliet, who are by no means the major protagonists, and whose coupling is also more or less forced, as a shotgun marriage.

But there is no attempt here to explain or interpret the ending in which Vincentio offers his/her hand to Isabella. It’s a ridiculous and disappointing textual ending, where Vincentio does that out of the blue. There is no foreshadowing of it in the text, and nor is there in this production. An older person of power imposing themself on this very young novice after what she’s just been through, particularly while not yet having processed whether this visit to secular life has encouraged her to embrace it, is just more pressure. As Isabella has no more lines after that offer that apart from anything else is ambiguous, the Duke being a woman, Ms McIntyre has a choice of ways of resolving it – Isabella rushes into the Duke’s arms, she turns away or she stands in shocked silence. Blanch McIntyre chooses the third. They stand, transfixed until the whole cast joins them for a joyous clap-along dance.

In any event, it’s a wonderful evening in the theatre for those who wish to enjoy a first-rate performance of a Shakespeare play.

The Tragedy of Macbeth, Joel Cohen: Review
Scroll to top