Metamorphoses at The Globe Theatre: Review

You are here: Home1 / Welcome To The No Sweat Shakespeare Blog!2 / Reviews3 / Metamorphoses at The Globe Theatre: Review

Strong on theatre, flimsy on drama, great on storytelling

This is the first test of the Globe’s new writers-in-residence, Sami Ibrahim, Laura Lomas and Sabrina Mahfouz, three experienced young playwrights, with an impressive collection of awards among them. However, billed as a play, their ‘Metamorphoses’ is not a play – it is a collection of stories from Ovid, in verse, in the mode of Ted Hughes’s ‘Tales from Ovid.’

For audience members expecting to be drawn into Ovid through a dramatic adaptation it means an adjustment is necessary, so there is a heavy burden on the actors to ease that.

The cast, a foursome – Charlie Josephine, Fiona Hampton, Steffan Donnelly and Irfan Shamji – begin lighting the candles in the chandeliers that are going to illuminate the stage as they tell the story of Juno and Jupiter. From that, sharing the storytelling, they move among tales of love, artistry, violence, power, and most consistently, mutability, Like the original it moves from the creation story to the final one, the transformation of Julius Caesar – who died a year before Ovid was born – into a god. 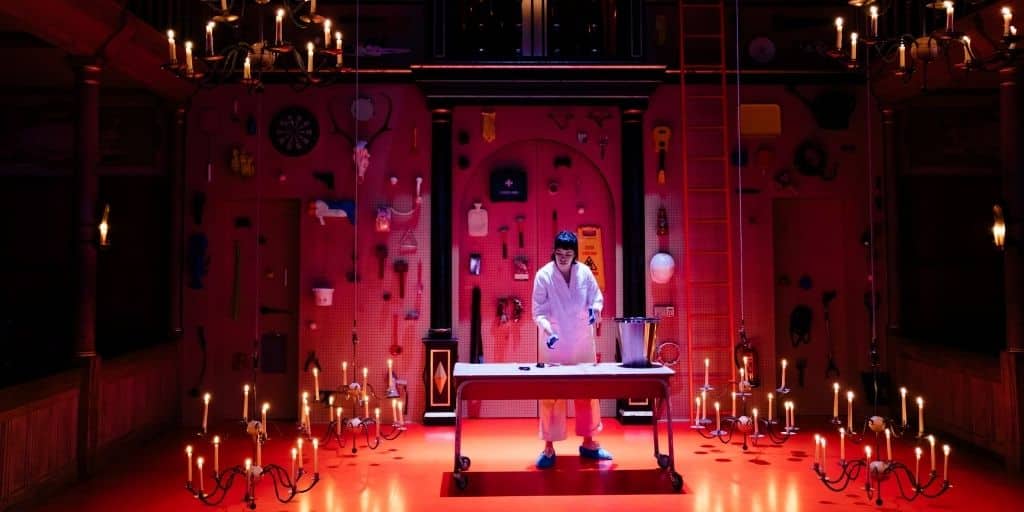 It’s outstanding storytelling. It’s done in the form of a performance a group of young actors might devise if asked to go into schools to tell the stories of works like Shakespeare’s plays, Chaucer’s tales, Aesop’s fables, but in this case, very impressive professional actors working with a top quality text and fine directors. They tell the stories clearly and plainly, relentlessly forging their way through the depths of the selfish, vainglorious gods’ inhumanity towards any human who gets in their way. Anger, incest, rape, mutilation, torture, are made even more shocking by the dispassionate tone of the telling. Fiona Hampton uses just that tone, when, as Hecuba describing the murder of her son Polydorus, she extracts his gruesome body parts from a white bucket and lays them carefully on a table. It’s chilling.

There is no melodramatic ‘acting out’ of the grief and depravity in the telling, but, rather, occasional humour, again making the relationship between the gods and the humans even more shocking. Well done to producers Sean Holmes and Holly Race Roughan for that.

The three writers seem to have selected from Ovid’s some 250 tales on the basis of how grim can it be? Dressed in white, picking their props from the some 250 everyday items hanging on the wall as a backdrop, the suggestion being that there is a lot more horror that we haven’t even touched on, the cast tell the stories. The mutations – Philomel into a nightingale, Hecuba into a dog – are done theatrically with sound and movement. Unfortunately, attempts at inducing participation by an audience uncomfortable with that were by and large unsuccessful, apart from one where the audience sang ‘American Pie.’ There were a few asides and ad-libs that did no harm, although one doesn’t know what the authors of the script may have thought. There were several postmodern moments when the actors directly addressed members of the audience with a greeting that had nothing to do with the story at hand. That did no harm either.

Once realizing that this is not a play, and coming to terms with that, it’s an enjoyable, if very intense, experience. One may think, however, of the effect of Ovid in later drama, like the transformation of Hermione from a statue into a human being in ‘A Winter’s Tale’ and the hilarious treatment of the Pyramus and Thisbe myth in ‘A Midsummer Night’s Dream,’ and sigh that one’s expectations of a new dramatic treatment of Ovid  had not been met.

But what we had was brilliant, and well done, all, has to be the conclusion.

Introducing Children To Shakespeare – A Midsummer Night’s Dream at The Globe...

Elizabethan Theatre Lives on in Today’s World
Scroll to top