Midsummer Mechanicals Review, The Sam Wanamaker Theatre At The Globe, 2022

You are here: Home1 / Welcome To The No Sweat Shakespeare Blog!2 / Reviews3 / Midsummer Mechanicals Review, The Sam Wanamaker Theatre At The Globe, ...

If kids love a show written and staged for kids then it doesn’t matter what the grown-ups think, and while Splendid Productions’ Midsummer Mechanicals confused at least one grown up – this reviewer – the kids were laughing and shouting and providing the sound effects by answering prompts to make thunder and wind, and even abstract things like fear, and silent things like snow. They were also offered circus and pantomime effects like clown acts and the opportunity of shouting “He’s behind you!” repeatedly when a bear came on and the actors pretended they couldn’t see it.

Three of the rude mechanicals from A Midsummer Night’s Dream, Peter Quince (Jamal Franklin), Nick Bottom (Kerry Frampton) and Francis Flute (Sam Glen), plus Patience Snout (Melody Brown), a new character introduced by writers, Kerry Frampton and Ben Hales, gather in the woods outside Athens to prepare a play to be performed at the first anniversary celebrations for the Duke, Theseus and the Duchess, Hippolyta. Their play, Pyramus and Thisbe having been well received a year before, they are full of enthusiasm and confidence, but not any more competent than they had been during their previous production. 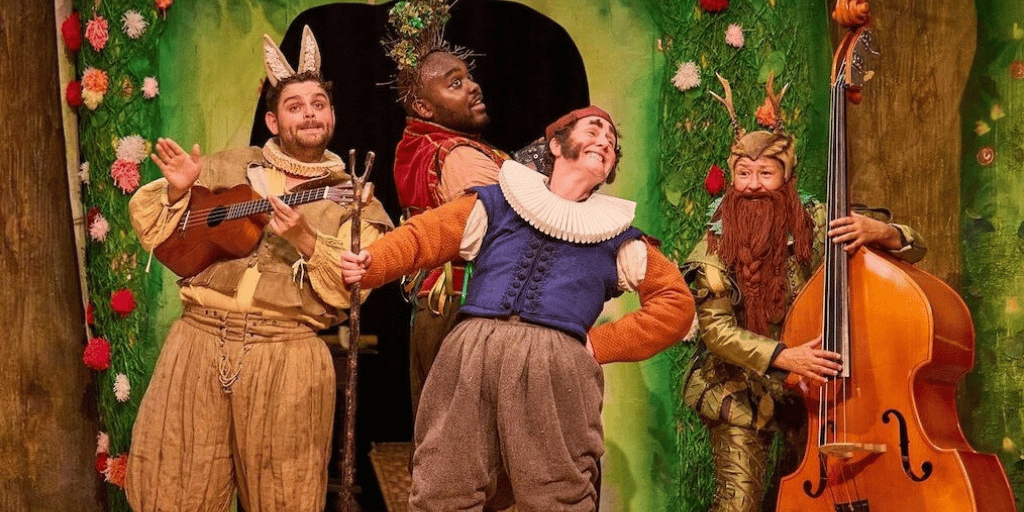 Although it was slightly difficult to follow because of all the interaction between the players and the audience of children, it penetrated a child’s imagination with great effectiveness. It does have a clear story, however: it’s an episode in the parallel, half-told story in Shakespeare’s play, of the life of the Fairy King and Fairy Queen’s marriage – the intervention in that by a human, Weaver, who has strayed into the woods. The first half is the rehearsal, and when you come back after the interval you can sit back and enjoy the hilarious performance.

The genius of this production is that it doesn’t matter whether children, of any age, follow the story. There is enough for an afternoon of fun anyway. Both halves are packed with invitations to the children to participate. In addition to the sound effects, children are invited to shout out comments and questions, which the actors respond to with their improvised replies. The Company composer, Ben Hales, has provided several songs, which the cast sing, playing a variety of instruments. Something striking and mysterious is how kids manage to sing along with songs they have never heard. There was a lot of that, and congratulations to Ben Hales for writing songs that have that characteristic.

Apart from the comedic antics of the cast, there are other moments when raw, immediate Shakespeare is introduced. Shakespeare loved name-calling and his plays are full of some of the most colourful insults anywhere. When Peter Quince invites the kids to supply insults for the main character – Weaver – played by Bottom, and the Fairy King, to throw at each other the kids become very excited and creative. When one of them shouts (BUTT!) it renders Quince speechless, while the audience rolls about.

One of the interesting moments was when the mechanicals get towards the end of the casting. They are left without anyone to play the Fairy King. Patience (Melody Brown) steps up and says she’ll do it. The others reject that flat out. A child shouts “A woman is not allowed on the stage” and the cry is taken up by others. The rustic actors discuss that and decide that it’s only illegal if you don’t get caught, and when the very female Patience comes out as the Fairy King, she is the most masculine figure on the stage, and gets the kind of acclamation all actors dream of. But how do little kids know about sixteenth century theatre conditions?

The decision to stage this performance in the Sam Wanamaker Playhouse was a good one. Its intimacy is perfect for the desired atmosphere – not too big and not too small for a good dose of audience participation.

Every member of the cast deserves a standout credit and it would be an artificial exercise to single any one of them out. The astonishing thing to this reviewer is the level of energy applied to each performance by each of the actors. Just thinking about it is exhausting. But the result is something special.

The Tempest Review, The Globe Theatre 2022