You are here: Home1 / Welcome To The No Sweat Shakespeare Blog!2 / Reviews3 / Introducing Children To Shakespeare – A Midsummer Night’s Dream at The...

Earlier this week I went to a session of Playing Shakespeare with Deutsche Bank.  It is Shakespeare’s Globe flagship project for secondary schools in London and Birmingham.

Each year the project gives free tickets to students – they come to the Globe Theatre to see a full-scale Shakespeare production, created specifically for young people. And this year it’s ‘A Midsummer Night’s Dream.’

It was a wonderful afternoon. A group of actors could not hope for a better audience than they had – a theatre full of 12 and 13 year-olds, most not having seen a Shakespeare play before or even having ever seen any play at all, apart from their annual school play. Going to the theatre, particularly a theatre very much like Shakespeare’s own theatre, was very special. 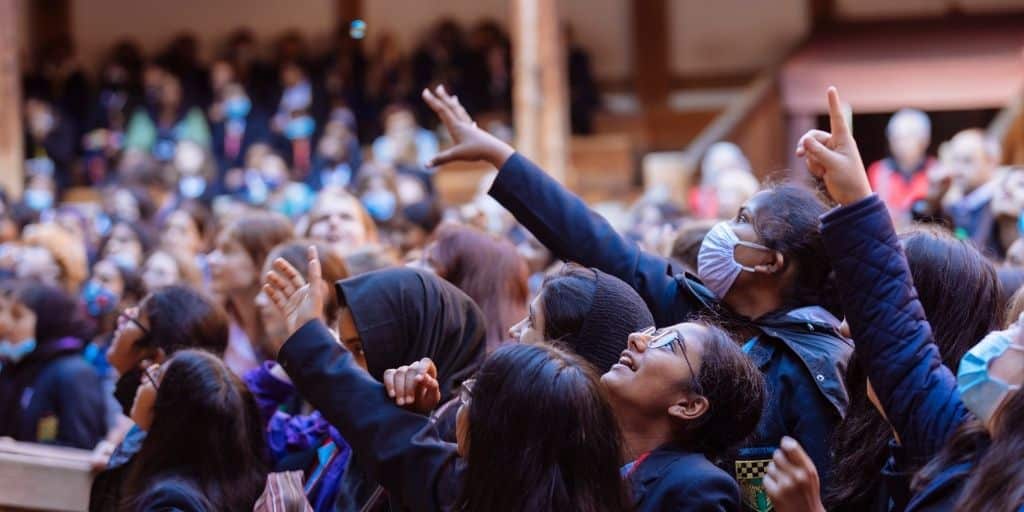 School children enjoying their special day at The Globe.

I arrived early and had the opportunity of chatting to a group of kids as they sat beside the Thames and waited to be taken into the theatre.

“I love Shakespeare,” one girl said.

What did she love about him?

“It’s such fun,” she said as her friends nodded in agreement.

“We done so many things on Shakespeare in the drama studio,” one of them said.

So they knew the play?

“We studied it in English.”

“But here, in his own theatre….,” a boy said, his contribution rewarded with effusive agreement from the girls.

“I find it quite confusing,” I said. “All that with the lovers: quite hard to make sense of it.

Lots of laughing and vigorous nodding: “I know, I know,” they chorused.

And then, supervised by teachers, they were all in their places – the lucky ones in the most expensive seats while some had to be content with being groundlings.

The first thing that happened on the stage was a brass ensemble, playing jazz, greeted by the most enthusiastic audience they could ever have hoped for.

That enthusiasm continued throughout the almost two-hour performance (without an interval). The design theme of this production is colour –vivid, psychedelic colours. Watching the performance is like being in the middle of an LSD trip, and that atmosphere conditions the whole experience as it becomes more and more zany, with some eye-catching piece of theatre happening every minute. 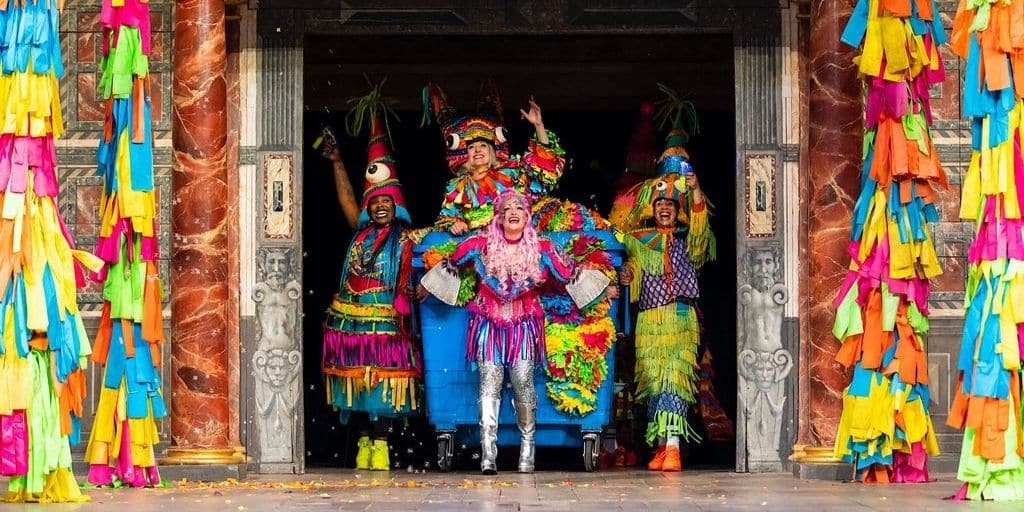 A Midsummer Night’s Dream for children at the Globe Theatre

Apart from the colour, the physically vigorous action and youthful energy evoked a response that one could not imagine from a typical theatre-seasoned adult audience. The teenagers loudly applauded every entrance, and every costume change, and there were more entrances and costume changes than are usual in a play. All the actors played several parts, and that could have been quite confusing: for example, Puck was played by several actors, the role being a choral performance rather than the single performance called for by the text. Actors would disappear around the back, do an exceedingly quick costume change, and reappear as one of the Pucks, cheered to the non-existent rafters every time.

In writing this play Shakespeare was, of course, doing everything he could to appeal to his audience, but did he imagine that the first entrance of Demetrius, a pop singer lookalike here, would evoke the ecstatic reaction of the hundreds of hormone-bubbling girls that this performance managed to do?

On the other hand, I couldn’t help thinking that this was what a performance in Shakespeare’s globe must have been like in his time. The audience cheered everything theatrical, getting particularly excited by anything even remotely approaching violence, drowning out all the dialogue during the slapstick scenes. They loved the rude mechanicals, particularly the things that had nothing to do with the drama, like the lion pulling Thisbe’s dress off, revealing a naked Flute left with only his boxer shorts. That drew the loudest, most prolonged, response.

The audience was listening as well as it was possible to, given the chatting that was going on, more or less controlled by stern looks from teachers. One, near me, got up and plonked herself in the middle of a group of girls who had become disengaged and were grooming each other and chatting.

The boys certainly heard Demetrius say the word ‘virginity’ as it set off a ripple of smirking and an outbreak of nudging and the exchange of gleeful looks, in exactly the way it does when words associated with sex crop up in novels and poems in English lessons.

One school became particularly engaged when one of their teachers was called up on stage to participate in the rustics’ play. When he went back to his place he was enthusiastically congratulated by his students.

The production was all fun and lightness – it didn’t address any of the darkness that lies at the heart of the play, but the play is above all an entertainment and on that level it produced the goods for this cohort of London kids. This chaotic, fun production was exactly right as an introduction to stage Shakespeare, instead of the Shakespeare in a book, read by an English teacher in a classroom. Who knew that Shakespeare could be such fun?

As we were leaving I asked some of them what they had thought of their first visit to the Globe. The consensus was that they had loved it. Had they followed the play? Not really, but they had done it in school and knew what was going on. And had they enjoyed it? Yes, it was great fun. “Better than being in school,” one boy muttered.

Metamorphoses at The Globe Theatre: Review
Scroll to top