Much Ado About Nothing Review, The Globe Theatre, May 2022

You are here: Home1 / Welcome To The No Sweat Shakespeare Blog!2 / Reviews3 / Much Ado About Nothing Review, The Globe Theatre, May 2022

The Globe has opened its summer season with an energetic, very funny and all-round entertaining Much Ado About Nothing. It’s a conservative treatment that pays close attention to Shakespeare’s intentions and brings out all the shades of light and dark that are in the text, with a particular emphasis on its comedy.

Lucy Bailey moves Shakespeare’s Much Ado About Nothing setting from Messina in Sicily to Veneto in Northern Italy just days before the final liberation of Italy in April 1945. There seems to be no advantage in making that point, but wherever it is set Joanna Parker’s design is wonderfully Italian, creating the feeling that one is inside the Corleone compound in celebration mode. That is particularly so for the groundlings, right inside the set as the stage encroaches on their space, curving around it, bringing the action right into their midst and creating the opportunity of audience participation at selected moments. Outdoor dining and leisure activities take place in the garden of the governor’s ivy-clad mansion while soft accordion music accompanies and punctuates the action, reflecting the emotions in the way music does in films.

The gangster impression is strengthened by the pervading presence of Olivier Huband’s Don John, dressed as the stereotypical movie gangster. The costumes, supervised by Caroline Hughes, are a delight throughout: the characters change their outfits several times, different clothes for different activities, and it’s like a 1945 fashion show. That creates an interesting dimension to this production, emphasising the comfortable, fun-loving and wealthy lifestyle of the community the play depicts. 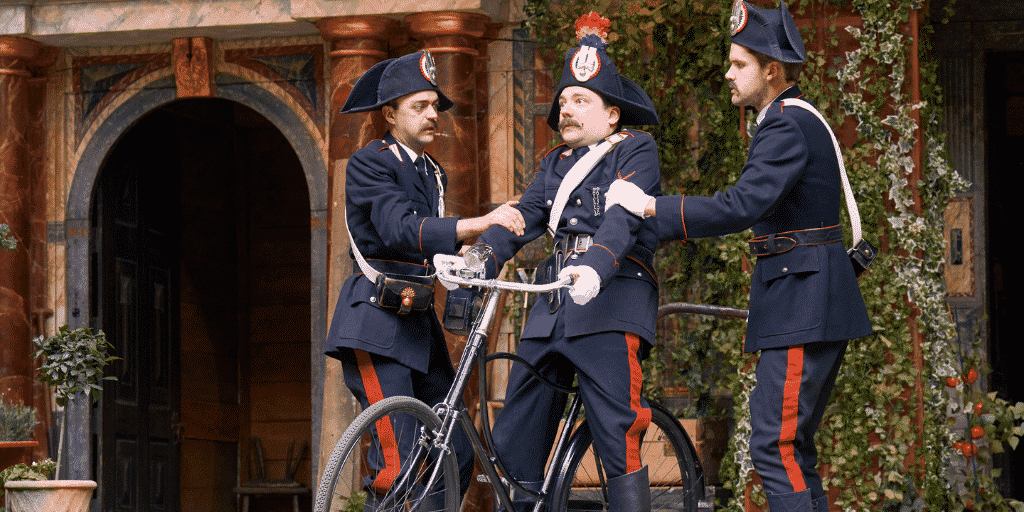 The difference between success and disappointment in a production generally boils down to the quality of the acting. In this one the acting is high quality from top to bottom. Beatrice and Benedick, being Shakespeare’s finest romcom pair, the actors playing them are always subjected to strong critical attention, and here Lucy Phelps and Ralph Davis score very highly.

Lucy Phelps has great comic timing, using all her resources – tone of voice, hand gestures, head and eye movements – to bring out the humour in the situation Beatrice encounters. We love her feminist commentary, and we strongly identify with her because the things she says resonate with our  generation and also, in this production, we delight in her because of Ms Phelps’s ability to wring the humour out of every line.

Ralph Davis is a cool Benedick, pulling off a difficult transformation – that of the sudden change from the confirmed bachelor to the doting lover – by being less of the confirmed bachelor, making his interest in Beatrice clear from the start. When he is being gulled by his friends Davis also exhibits a talent for slapstick, creatively using every possible hiding place the garden offers, simultaneously hiding and being close to the conversation, even crouching right behind them, keeping the audience in waves of laughter throughout the scene.

In Shakespeare’s text the other couple move in the shadow of Beatrice and Benedick and there’s not much the actors can do about it. However, Nadi Kemp-Sayfi as Hero puts colour into what is basically a character lacking that by exuding a sunny personality, while Patrick Osborne’s Claudio is convincing as an unlikeable lightweight. We don’t take to him from the beginning and certainly don’t begin to forgive his frankly unforgivable cruelty during the romantic resolution.

One of the glories of Much Ado is Dogberry, the corporal leading the scrappy band of Keystone-like cops. George Fouracres, a great comedian, evidenced by his superb Sir Andrew Aguecheek in last year’s Twelfth Night, is always someone to look forward to and he doesn’t disappoint as Dogberry. He’s a wonderful mixture of pomposity and ignorance, bringing Peter Sellers’ Inspector Clouseau to mind.

Lucy Bailey has mercifully chosen not to follow the current insistence on filling as many male roles with female actors as possible but she has made an exception in casting Katy Stephens as the central figure, Leonato, who becomes Leonata, the mother rather than the father, of Hero. Although a very fine actor, the downside of Lucy Bailey casting her is that it changes the play somewhat: she is a charismatic actor and dominates the action, throwing the production’s balance slightly off because of that, but the main objection is that she brings a sexuality to the role that isn’t in the play, and not imagined by its author. She constantly flashes her legs and flirts with Don Pedro and even with Claudio. It’s difficult to understand what Lucy Bailey was thinking of if she directed, or allowed, that. In spite of Ms Stephens’ performance, it doesn’t work and Lucy Bailey would have done well to complete her conservative approach with a more traditional casting of the role.

At the end of April, still somewhat wintry, two and a half hours sitting unmoving at the Globe is a bit of a challenge but the warm tone of the production and the summery set compensate. What was good enough for Shakespeare’s audience in the same English climate – perhaps even colder – should be good enough for us. A very worthwhile visit to the theatre whether the weather or not, and as the cool spring gives way to what we hope will be a gorgeous English summer, theatre-goers are in for a treat.

Are You Calling Shakespeare A Thief?

Julius Caesar Review, The Globe Theatre, May 2022
Scroll to top