You are here: Home1 / Welcome To The No Sweat Shakespeare Blog!2 / Random Fun Stuff3 / Plagiarizing Shakespeare

Plagiarism was not an issue for Elizabethan and Jacobean playwrights, and there wasn’t even any such concept. Writers collaborated on plays without there being any fuss about whose intellectual property the final play was. They also used the stories and even the words of other writers in their plays and that was entirely acceptable at the time.

If any writer did that today he or she would very soon have a major lawsuit to contend with. We have seen several cases of that and some writers have had their reputations destroyed by having been found out.

One of the first things that newly arrived university students are told is that plagiarism is an expelling offence. They are warned that their essays are run through plagiarism software. High school students are usually able to get away with a warning rather than expulsion but plagiarism is nevertheless seriously regarded in schools. 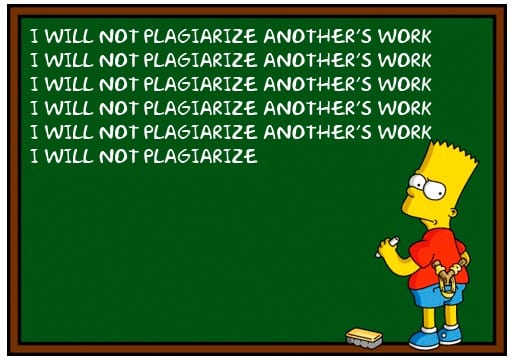 When I was a university student, long before the age of plagiarism software, a high living friend was threatened with not being allowed to take the exam because he had failed to hand in the last three essays. He begged me to lend him my three essays to help him, which I did, but unknown to me he simply copied them. They were good essays, which I had worked hard on, achieving around 80% for each one. My friend had a different tutor so it seemed safe to copy mine. However, his tutor knew that he was almost completely uninterested in anything academic and had missed most of the lectures and tutorials. He knew what my friend was and was not capable of and knew that he could not have written them. The essays came back with an average of 29%. The fact is that the tutor, knowing him, had not been fooled. He did not know who the original writer was but he knew it wasn’t my friend. And he was determined to fail him.

My friend survived and went on to have an illustrious career as an ambassador to several major countries.

As a teacher, I could immediately tell when a student’s essays were not written by him or her. I did not have to run them through the software, but I did, only to provide evidence to his or her parents that their child had copied passages from the internet.

There are several companies offering custom essays on the internet. They assure potential clients that the essays are written especially for them and none of it is copied from anywhere. Most important, however, they warn their clients of the seriousness of plagiarism and make it clear that they offer only templates that will help students who have fallen behind for some reason to gain some insights that their writers’ work will provide, and warn them not simply to hand them in as their own.

Such study aids are widespread and schools and universities know they exist, so it comes back to how well the teacher knows the student’s level of ability, how she expresses herself and so on. The teacher’s experience is key to this problem. One cannot blame the essay-writing companies for anything – the issue is between the student and the teacher.

Ironically, in the 21st century, Shakespeare’s texts are widely being run through plagiarism software. That is not to prove that he copied things, which we already know he did, but to find his hand in the vast body of dramatic writings of his time. As a result of that we have a valuable insight into how Elizabethan and Jacobean writers worked, which was mainly collectively.  Scholars have discovered a network of collaboration among them, and even more exciting, that Shakespeare is present in a great number of the plays credited to other writers, that were being performed in the London of his time, something that we had not previously known.

When Shakespeare copied the stories, ideas and text of other writers he always transformed them into his own immortal work. He changed words here and there, improved them and fitted them into his own themes. We have to be grateful to those writers who gave Shakespeare the ideas and stories that we so enjoy and value today. Those from whom he copied will not be remembered but Shakespeare’s texts will live forever.

There are a number of academic writing companies – such as www.customwritings.com – offering custom essays written from scratch by experts. Unlike some of the examples above, they assure potential clients that their essays are written on demand, and not copied from anywhere. They also warn their clients of the seriousness of plagiarism and make it clear that they offer only templates to help students gain insights rather than simply to hand them in as their own.

Violence in Macbeth
Scroll to top