A Prayer Before Dying – A Favorite Shakespeare Moment

You are here: Home1 / Welcome To The No Sweat Shakespeare Blog!2 / Shakespeare's Works3 / A Prayer Before Dying – A Favorite Shakespeare Moment
Written by David BlixWe‘ve teamed up with the most excellent Master of Verona (aka David Blixt) to trade blog posts this week. Here’s his take on one of his all time favorite Shakespeare moments. Jump into the debate and tell us yours in the comments section at the bottom of the page.

I was recently considering my favorite moments in Shakespeare. Having performed about half the canon, there are plenty for me to choose from. I tend to lean towards the heart-breaking. Juliet’s line to dead Romeo: “Thy lips are warm.” Kent holding his dead king: “Vex not his ghost. O, let him pass.” Things like that.

But my favorite moment in all of Shakespeare, the one that kills me every time, is a prayer before dying from Othello. Perversely, it’s a line that’s almost always cut in performance.

By Act V, our tragic hero is utterly convinced that his faithful wife is anything but, that she has been carrying on with Cassio. But he still loves her – if he did not he could not be so passionately moved. So, though he has resolved to kill her, he first must make certain she has prayed:

OTHELLO:  Have you pray’d tonight, Desdemona?

OTHELLO: If you bethink yourself of any crime

Unreconciled as yet to heaven and grace,

Solicit for it straight.

DESDEMONA: Alas, my lord, what do you mean by that?

OTHELLO: Well, do it, and be brief; I will walk by:

I would not kill thy unprepared spirit;

No; heaven forfend! I would not kill thy soul.

DESDEMONA:   Talk you of killing?

DESDEMONA:  Then heaven
Have mercy on me!

OTHELLO: Amen, with all my heart!

This is from the Elizabethan tradition that a prayer before dying will cleanse the soul, sending it to Heaven. It’s actually a rather Lutheran belief, not needing a priest to intercede between penitent and God. This same belief stops Hamlet from murdering his uncle while Claudius is bent in prayer.  Here, Othello is making sure that, though she must die, Desdemona’s soul will go to paradise. His passion and his honor demand her death, his love demand her soul be saved. 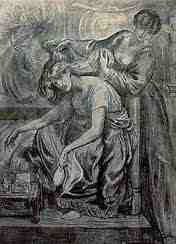 He kills her, smothering her with a pillow – twice. Although when I last staged it, the second time he goes to kill her, I had him tenderly hold her, then break her neck. This is because, like so many Shakespearean characters, she must talk after she is murdered. Mercutio does this, and Paris, and young Macduff, and countless others – they are dead, and speaking their last. So, too, does Desdemona. But a woman smothered to death is unlikely to speak, hence my choice to have her die slowly of a broken neck.

Her maid Emilia rushes into the room and kneels beside her dying mistress, while Othello looks on.

DESDEMONA: A guiltless death I die.

DESDEMONA: Nobody; I myself. Farewell.
Commend me to my kind lord: O, farewell!

This is my favorite line in Shakespeare. “Nobody; I myself.” Desdemona loves Othello so much, so deeply and truly, that she tells this lie for him. Her love is deeper than Othello’s, because it can forgive anything – even her own murder.

Here’s why this moment wreaks havoc on me. By saying she did it, she is telling a lie. Thus committing a sin. Thus damning her soul to Hell to protect the man who just murdered her. Desdemona willingly condemns herself to eternal damnation to save Othello. It’s so awfully, wonderfully tragic I can hardly breathe.

As I mentioned, this moment is hardly ever staged. It’s too hard, or too funny, to have a murdered woman talk. But staged properly, it has all the more power, because it shows the depth of the love Othello has just cast away.

It’s my favorite moment in Shakespeare.