12 Questions About Shakespeare You Wanted Answered

You are here: Home1 / Welcome To The No Sweat Shakespeare Blog!2 / Historic Shakespeare3 / 12 Questions About Shakespeare You Wanted Answered

We were fascinated by the range of questions about Shakespeare, and learned that homework never really goes away — we’re always learning more about Shakespeare, his plays, and history. So take a look through the 11 top questions we were asked by Instagram users, and see if any of your questions got answered!

1. With regards to his sonnets and the way he writes about the black lady and the young man W, what does it tell us…

A: This is a tough one because, unfortunately, there can be no definitive answer on what real relationships to the Dark Lady and the “fair young man” were. It’s entirely possible that Shakespeare had a real love for both of these people, and that they were real people that Shakespeare was writing about.

It’s also possible that they were invented figures for poetic means, especially the Dark Lady. But it certainly does tell us that Shakespeare knew a lot about love first-hand, and that love for a man was certainly a possibility for him!

2. … about his views and dynamic of men and women? Did he see them differently, if yes how?

Personally, I would say that the better way to understand Shakespeare’s comparison between men and women would be to analyze characters in some of the plays, but if you’re going with the sonnets I think it’s apt to say he idolized men more than women.

3. Why do you think the play Macbeth is considered to be infamous or let’s say doomed?

A: Oh, this is such a fun one! The curse of “The Scottish Play” is said to have originated (possibly) from real witches. There are claims that the Weird Sisters’ incantations in the play are based on real witchcraft. It’s said that some witches were upset by this and put a curse on the play. 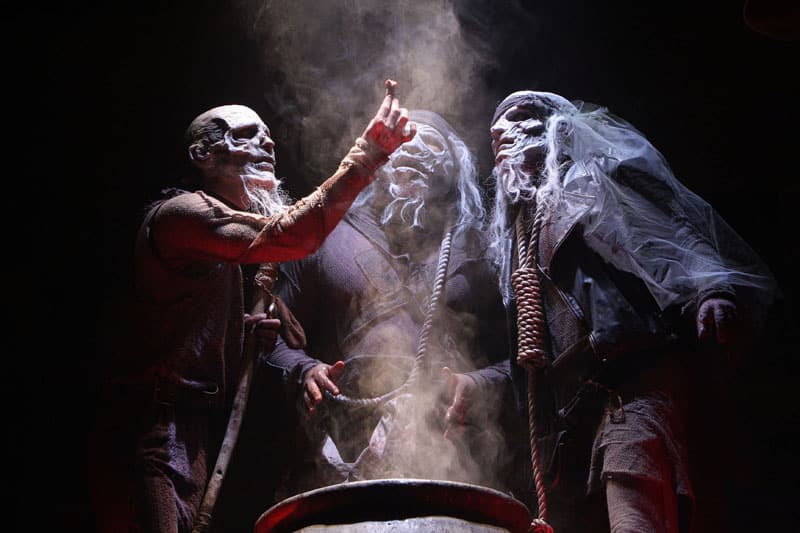 Do these three witches look like they would have cursed the play? The Weird Sisters in the Folger Theatre’s 2008 production of Macbeth, directed by Teller and Aaron Posner. Photo: Carol Pratt

4. Did Shakespeare actually have a bad relationship with his wife?

A: Ah, this is a common misconception! There’s no real proof that Shakespeare and his wife, Anne Hathaway, had a bad relationship.

Though he was mostly in London for work, when he retired he did return home to Anne. They had three children together, and the bequeathal of the “second-best bed” in his will was likely their marriage bed rather than the guest bed, which is romantic!

5. Is there any evidence as to what Shakespeare deemed his favourite or best work?

A: What a great question! We do know that Shakespeare was more personally involved in a couple plays: Hamlet and The Tempest. He likely played King Hamlet’s Ghost himself, and The Tempest is the only play where he’s clearly inserted himself as a character (thorough Prospero).

That said, in his day, the histories were the most popular plays he wrote, and they were what he started out writing.

6. Why is Shakespeare such a highly regarded playwright, compared to so many other great ones?

A: This is such a tough question because there are so many answers. And, of course, there are other absolutely brilliant playwrights that have come about in the last 400 years.

But for a brief answer: I’d argue that he is so highly regarded because of how human his characters are. He uses poetically stunning phrases to craft instantly recognizable and empathetic people.

It’s extremely hard to craft characters that feel natural even though they speak in verse and now-antiquated language. But Shakespeare did it.

7. Do you agree with the theory that King Lear is a play strongly referring to Christianity?

A: Excellent question! There are certainly Christian themes throughout many of Shakespeare’s later works — mostly the theme of redemption, and specifically redemption of the corrupt father (as is also seen in Winter’s Tale, The Tempest, etc.)

Critics have certainly seen Cordelia as a Christ-like figure. She appears for Lear when he needs her most, and gives her life to redeem him, much like a crucifixion. Her purity and her martyrdom are her two most prominent parts of her role, so look at the language around Cordelia. 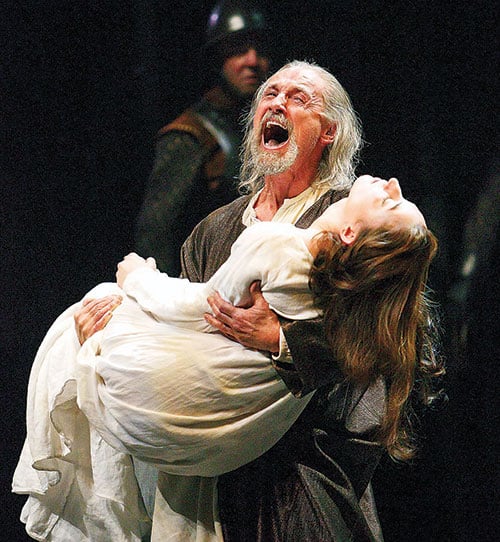 8. Did Shakespeare do much travel abroad, seeing as so many of his plays are set outside England?

A: Actually, no! As a matter of fact, it’s likely Shakespeare never left England, even though the majority of his plays are set abroad. It’s likely he would have learned about those places from books and first-hand accounts.

9. Did Shakespeare’s children influence his plays at all?

A: There is definitely speculation that Shakespeare’s son, Hamnet, could have influenced Hamlet! Hamnet died just three years before Hamlet was written — a play largely about a son and his father. 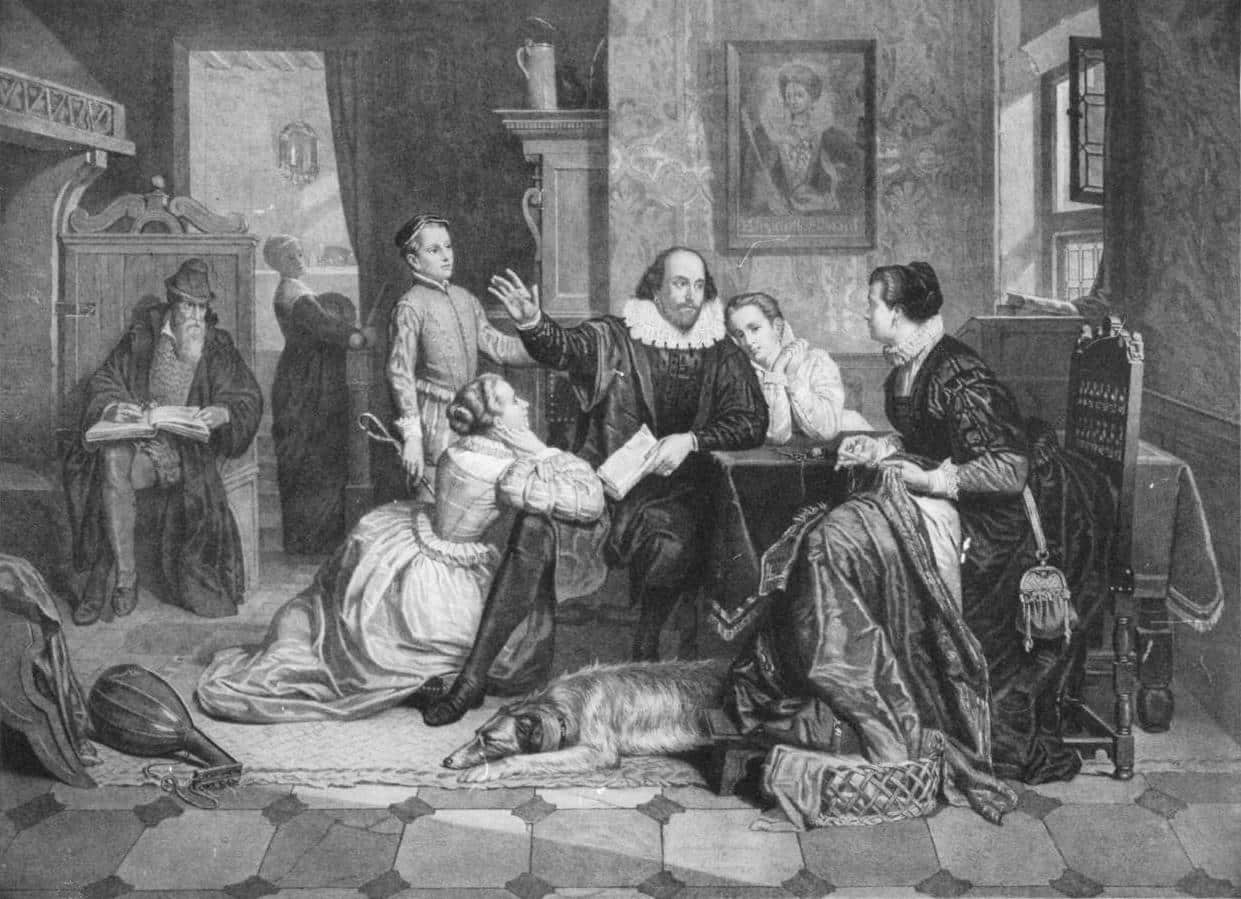 Shakespeare’s family sits around him in this 19th century engraving.

10. Is it true that Macbeth was written especially for the King? How did Shakespeare do it?

A: Such an interesting question? Macbeth was largely written because the new king, James I, was fascinated by and terrified of witches. Not only that, but he had been the victim of an assassination plot — much like Macbeth himself invents.

A: Hahaha I WISH! He definitely does use “Will” in a double sense frequently (to refer to himself and the noun/verb “will”), so he likely went by Will…but no evidence of Willie or Shakes.

Did you have any of your own Shakespeare homework questions answered in this Q&A? What did you find the most surprising? Let us know in the comments below!

Did Shakespeare Have Plastic Surgery?

NoSweatShakespeare Debut On ‘That Shakespeare Life’ Podcast!
Scroll to top