You are here: Home1 / Welcome To The No Sweat Shakespeare Blog!2 / Random Fun Stuff3 / Quoting Shakespeare

Although Shakespeare lived 400 years ago, his language is so ingrained in our everyday speech we’re often quoting Shakespeare without realising it.

When you enter the Shakespeare Birthplace in Stratford upon Avon, one of the first things you see is a framed poster based on an article written by the famous English journalist and essayist, Bernard Levin. The article demonstrated how we all spend our days unconsciously quoting Shakespeare while talking with family, friends, and workmates. That poster has itself become famous, and is known as the “Quoting Shakespeare” poster: 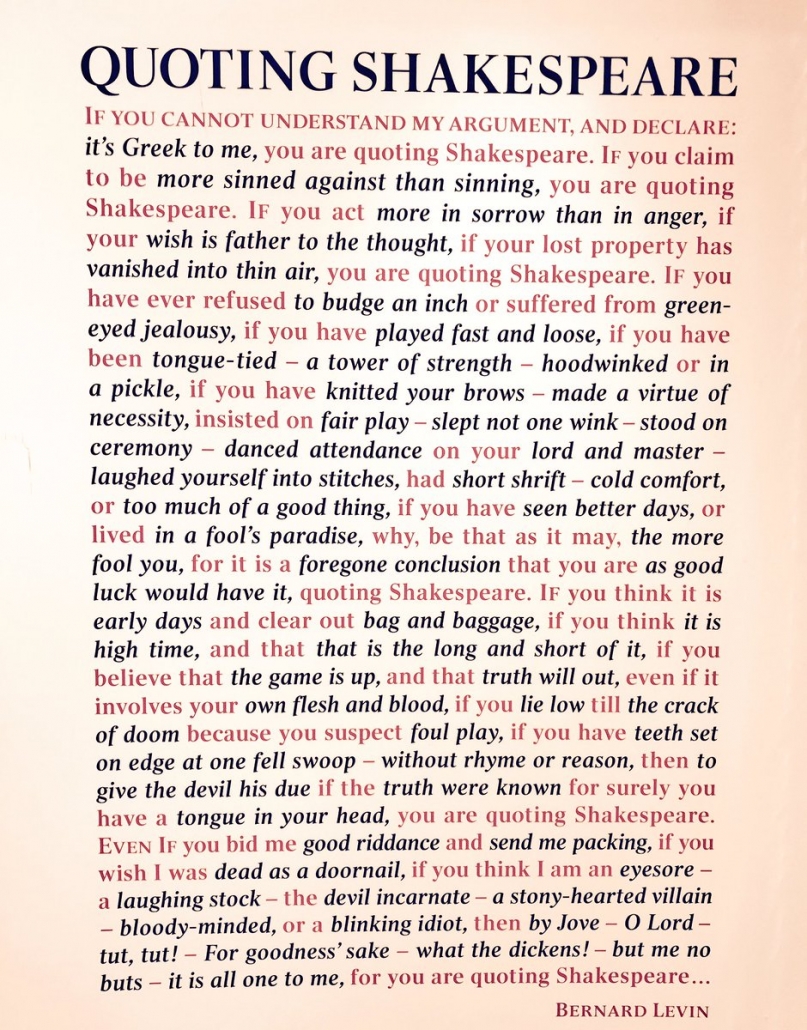 It continues with some unexpected phrases from Shakespeare, and ends with ‘by Jove! O Lord! Tut tut! For goodness’ sake! What the dickens! But me no buts! – it is all one to me. If you ever make those exclamations you are quoting Shakespeare.’

It would be impossible to quote all the phrases we use in everyday speech that first appeared in a Shakespeare text.

Quoting Shakespeare may be something we are doing every day without any effort but some of us, probably most of us, consciously quote Shakespeare at some point.

For example, if you are to be the best man at a wedding, planning your speech, you may scan the works of Shakespeare for some memorable phrase with which to honour your friends whose happy day you are celebrating. Certainly, you can be sure of finding exactly the right form of words for that. Perhaps your friends fell in love at first sight. “Who ever loved that loved not at first sight?”  the Bard asked, approving of your friends’ condition. If there is a joke among the friends of the couple that they are wildly unsuited and that their marriage is a mystery because the bridegroom is the ugliest fellow out, what better to compound that joke with “Love looks not with the eyes, but with the mind/And therefore is winged Cupid blind.” That would make all the guests laugh.

One of the most poetic parts of funeral addresses is frequently the first verse, or the whole funeral poem, from Shakespeare’s Cymbeline:

Fear no more the heat o’ the sun,
Nor the furious winter’s rages;
Thou thy worldly task hast done,
Home art gone, and ta’en thy wages:
Golden lads and girls all must,
As chimney-sweepers, come to dust.

Two lines from Hamlet have become the most quoted lines by the closest to the deceased at countless funerals of famous men: “Good night, sweet prince/And flights of angels sing thee to thy rest.”

There is hardly a situation in life on which quoting Shakespeare would not be appropriate, either a line by one of his characters or in his sonnets. A political leader may complain to his associates: “Uneasy lies the head that wears the crown.” Bemoaning corruption, they may say “Something is rotten in the state of Denmark.” Lawyers, when considering the counter-intuitive way the law sometimes operates, are very prone to say “the law’s an ass.”

People feeling that they have had a lucky break may say “as good luck would have it,” or looking for an apt quote for a speech about a piece of luck may choose “Fortune brings in some boats that are not steered.”

Often, the leader of a project about to begin, wanting to inspire their troops, will conclude a speech with “Once more unto the breach, dear friends, once more!”

Quoting Shakespeare is something that every single one of us in the English speaking world does all the time. Even little children may be afraid of being made “a laughing stock” or may send an unwanted companion on their way with the comment, “good riddance.”

We cannot escape the language of Shakespeare. Nor would we want to.