You are here: Home1 / Welcome To The No Sweat Shakespeare Blog!2 / Reviews3 / Romeo and Juliet, Shakespeare’s Globe Theatre, June 2021 Review

Ola Ince’s production of Romeo and Juliet is very contemporary. Shakespeare’s friend, Ben Jonson, wrote, in the Preface to The First Folio, that Shakespeare was not of an age, but for all time, and indeed, Ince demonstrates that with her 2020s ‘woke’ production.

In her version of Verona powder-snorting, knife-carrying teenagers have nothing to do so they hang out in the streets in gangs and look for trouble with teenagers from other gangs. Parents are indifferent to their children’s cries for help while teenage bodies lie in the streets. The authorities seem unable to do anything apart from threatening them with the drastic remedy of execution.

It’s Shakespeare’s lack of any agenda in his playwriting that makes his plays universal. This production, laudable as it is in many respects, is heavy on didacticism. Shakespeare’s text is pressed into a solid frame made of information about Ince’s views on what the ills of society are, which turns the performance into something like a public awareness service.

Each scene begins with a member of the cast informing us of things such as “the number of London youth clubs has halved since 2011. Young people have nowhere to go.” Then we see young people roaming the streets with knives. At the same time, the message is presented in large print above the stage.

Teenagers haven’t changed in the last four centuries, nor will they change, and perhaps in a hundred years from now, teenagers will still be roaming the streets with knives or some weapon we haven’t yet dreamt of. And there’s nothing Ince can do about it. However, to make sure that the audience understands that she would like something done about it she is using the stage in an iconic theatre as her platform. Her messages appear in huge red letters on an electronic notice board above the heads of the actors, diverting attention from the action on the stage. When the Nurse goes looking for Romeo we are told that “it is dangerous for women to go out alone” as we are seeing the Montague gang molesting her. Why is it necessary to tell us she could be in danger? Ince has twisted it, of course, because no one before her has ever thought that the nurse is in danger in this comic scene where the kids make harmless fun of her.

There are some good things here, though. The star scene is Capulet’s party. It’s wild and loud and creative with punk rock songs by composer, Max Perryment, mixed with music by such groups as Arctic Monkeys. Some of the scenes are accompanied by quiet non-intrusive mood music featuring a trumpet and a trombone. That is quite effective.

Jacob Hughes’ design is suitably minimal for the bare stage. Juliet’s huge round bed, wheeled in and out, is the main feature, playing a major role as so much of the action takes place in her bedroom. Herbalist Friar Lawrence has a rolled-in greenhouse full of colourful flowers, which is later converted to Juliet’s tomb. Jackie Orton‘s costumes are exactly right for the contemporary scene where everyone wears whatever they like. A nice ironic touch is the slogan ‘Good Vibes Only’ on the T shirt Romeo is wearing when he kills Tybalt.

The performances are uniformly first-rate. The Nurse stands out as a lively, resourceful operator and Mercutio as an effective comedian while displaying a fierce devotion to his friend. The semi-detached Lady Capulet of Shakespeare’s text wanders around in a daze, hardly ever without a drink in her hand, and swigging from a bottle at the party.

Juliet and Romeo are just right: the highly intelligent, willful, rebellious and very strong girl, newly entered into her teenage life but already quite mature, is captured by Rebekah Murrell. One can see that if it had turned out that she could have been Romeo’s wife for the rest of their lives, she would have run rings around him. Romeo, played by Alfred Enoch, is the silly, not-so-bright, boy who emerges from the experience with a new maturity, with which he is able to call Paris ‘boy.’ Murrell is made more convincing in that she looks like a thirteen year-old, particularly when she is playing childish games. She is tiny and slim and looks far more vulnerable than she is. Somehow, in the final scene, she seems more like an adult, ready, when she wakes up, for the new life that she believes her courage has brought her. It’s a wonderful transformation and makes her death more tragic. 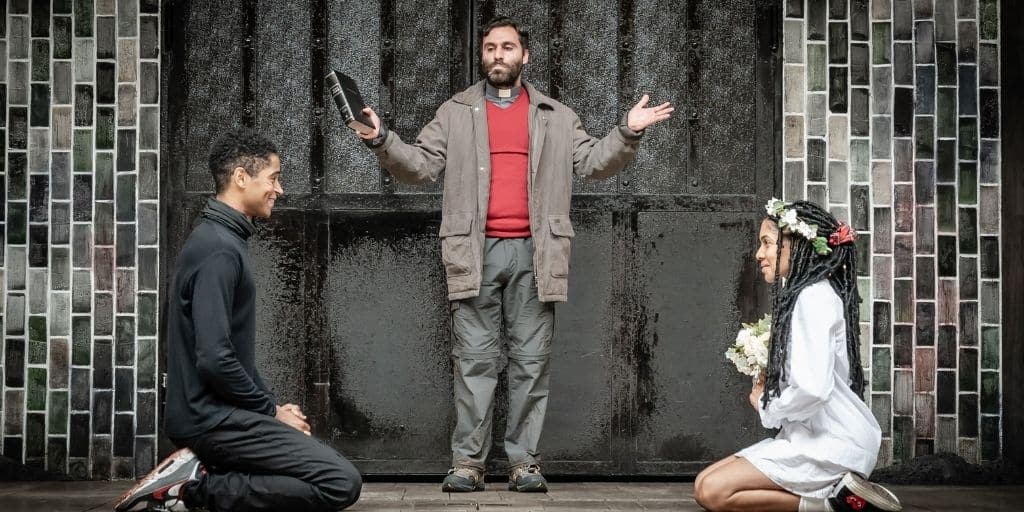 In spite of the many good things about this production, and apart from the didactic framing, it doesn’t work as intended by the author. Ince has deleted what are possibly the three most important scenes – the key scenes that give sense to the drama.

The opening scene where the servants of the two houses encounter each other and flirt with violence, which gets out of hand, is missing. That scene establishes the depth of the division in Verona. Whereas the elders of the two houses maintain a distance from each other, but are not interested in actively pursuing the feud, apart from a few, like the fiery Tybalt, the lower orders maintain it as a way of expressing their youthful tribal inclinations in an age before football fulfilled that function. Without that scene Ince is able to suggest that this division is not societal but individual, which plays to her thesis that the play is about mental health.

So, furthering her thesis, Ince omits the final scene in which the heads of the two families abandon the ancient feud and heal the social rift. She goes even further and ‘cancels’ Montague and Lady Montague altogether. They do not appear as characters at all in this production. It’s an important scene that suggests that the tragedy is due to a social dysfunction rather than a mental health problem, a problem that leads to the teenage suicide that Ince informs us about in bold red letters, and that distracts the audience from Shakespeare’s drama. In doing so she denies Shakespeare’s much-repeated assertion that these are star-crossed lovers who, whatever they do, or whatever their mental health may be, are doomed.

The wooing scene is also missing. This is the falling in love and instant bonding of Romeo and Juliet. It’s a vital scene as without it it’s difficult to understand or sympathise with them. Ince goes straight to the balcony scene. Anyone who does not know the play would not understand what was happening and may question the depth of their feelings.

All in all, this is a good evening at the theatre and the scenes that are there are well done, albeit that the audience is constantly distracted from them by the strong propaganda that accompanies the action. Fresh, imaginative interpretations of Shakespeare’s plays are always welcome on London stages but they should be about the plays and not the preoccupations of the directors. To end a performance of a Shakespeare play with the phone number of an anti-suicide organisation to contact if you are affected by the tragedy of Romeo and Juliet is absurd.

How To Write An Elizabethan Play

The ‘Golden Age’ And William Shakespeare
Scroll to top