You are here: Home1 / Welcome To The No Sweat Shakespeare Blog!2 / Reviews3 / Review of Romeo and Juliet, Regent’s Park Open Air Theater, June...

To be at the theatre at last, with a large audience humming with anticipation as the curtain-up time approaches, is one of the best moments among those things that are being slowly restored as a post-covid age emerges. And in the open air in Regents Park on a beautiful June evening – that makes it something very special. Then, when the play begins, the audience is treated to a fast-moving, sparkling performance.

As you wait you can already see that this is going to be a street-wise story. It is going to take place on a building site. Naomi Dawson’s stage is a rough patch of dirt, from which rises very high scaffolding with a commercial building taking shape. It is an image of wealth looking down on a scrappy unformed space that is going to see a large amount of violence. The ground is split right down the middle as though by some violent natural event and, indeed, the performance begins with the sound of an earthquake, with smoke rising from the broken earth.

There is no Prologue. Instead there is that opening sound shock. Sound has an important role in this production. Giles Thomas’ score is continuous throughout the performance, sometimes in the background and at times very much to the fore. It’s made up of a mixture of music of amazing variety, and sound effects. As in films, Giles Thomas’ music leads the audience’s emotional responses, and, at times, also like in films, he overdoes it, in this case with an emotional, distracting, soaring in the romantic scenes.  At other times it works well. Instead of the missing Prologue, placed in the text to alert the audience to the star-crossed course of the action, with its inevitable conclusion, in the first half there is a continuous slow drumbeat behind the comedy. It’s quite uncomfortable but that’s the point of it, and it works, as even if one did not know the play one would have the sense of foreboding and apprehension that Giles Thomas intended.

The play opens with the household servants appearing in the plain costumes designed by Naomi Dawson for the cast, in a period that can’t be determined, butis certainly modern. The Montagues are in black and the Capulets in white, even the heads of the houses. It’s bewildering, as it strongly suggests that the contest between the two families is a matter of good and evil, whereas Shakespeare makes it clear that the houses are “both alike in dignity.” In the event it’s difficult to see why that was done.

Shakespeare contracts the story of Romeo and Juliet into a three-day span, and there’s an awful amount of action crammed into those three days. Kimberley Sykes tells the story with a sure-footed confidence that results in absolute clarity. She has cut and trimmed the text and, to an extent, it works, but it is too cut-down and too rushed. One of the casualties of the cutting is the scene where Friar Lawrence enters the tomb, tries to take Juliet away and then abandons her in a moment of cowardice. That is an important scene in the understanding of the enormity of what Friar Lawrence has done, but completely cut here. In spite of the pace Shakespeare has some scenes where the action slows down, but Sykes rushes through them. The meeting of the lovers is cursory, the morning after their night together is curtailed to the point of it’s almost being not there, and the scene where Juliet’s body is discovered, is rushed. There is no lingering or languishing in this production.

There are some interesting inventions however, one being the way the deaths are handled. Instead of their bodies being carried away, we see their souls leaving their bodies by the simple device of the deceased standing up slowly and walking quietly away, into the audience. There are no bodies lying around. When Romeo sees Tybalt in the tomb it is Tybalt’s ghost that he sees.

The strength of this production is the acting. A strong cast led by a funny Capulet, a nurse, played by Emma Cunniffe, who grows on you as she gets deeper and deeper into the lovers’ plot, a wonderfully matter-of-fact Lady Capulet (Ellie Beavan), a fiery Tybalt played by Michelle Fox, and Cavan Clarke’s Northern Irish Mercutio who, unfortunately has to rush his lines and so loses some of the jokes. Tom Claxton’s Peter, and Paris, played by Richard Leeming, expand their written roles, the former using a range of expressions and gestures that in themselves create comic effects, and the latter who, unusually, turns the formal boring count into a passionate young man who has unexpectedly fallen for the bride he has acquired by a clinical arrangement that includes the exchange of money. 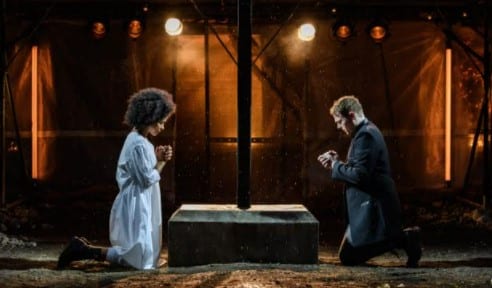 Joel MacCormack as Romeo and Isabel Adomakoh Young as Juliet

Peter Hamilton Dye’s Friar Lawrence is superb. He is convincing as the mature unfazed problem solver – the grown-up in the room, the anchor of sanity in this dizzy madness, although, ironically, he turns out to be the real madman.

There must be a special word for Andrew French’s Capulet. The genial joke-maker aspect of his performance is a joy. He even creates jokes unimagined by Shakespeare, for example turning the phrase “deck her up”  into an almost post-modern phrase, saying it in a way that suggests he, instead of Shakespeare, is coining a saying that is going to catch on for all time. And it’s funny. But Capulet the bully, the domestically violent man, is missing. The scene where Capulet’s rage boils over and he has to be stopped from striking Juliet by the nurse and Lady Capulet is curtailed: French doesn’t have an opportunity to reach that level of performance.

Isabel Adomakoh Young, as Juliet, is the star of this production. Her interpretation of the role is something Shakespeare would have approved. She is the confident, assertive, quick-thinking, intelligent and mature girl she has to be to make the play work as it should. She is enormously appealing and reaches the audience on all the emotional levels demanded by the role. She is the teenage girl in love, she is the rebellious daughter, the courageous participant in Friar Lawrence’s mad scheme, while at the same time convincingly showing her vulnerability as she contemplates the horror of waking up in a tomb, surrounded by corpses. She has a strong grasp of the play, the text and the role. She is Juliet.

It’s a pity that Young is hitched to the disappointing performance by Joel MacCormack as Romeo.

Perhaps the problem with Joel MacCormack’s performance, and perhaps, too, something of a problem with this production, is the lack of chemistry between the two actors – not their fault, but significant.

MacCormack misses most of his opportunities. He is not the teenager in love when we first meet him, swooning at the thought of Rosaline, and he is not the romantic lover in the scenes with Juliet. Throughout all those scenes his body language does not match the poetry of the text. Although he mouths the words he does not seem to be smacked by seeing Juliet for the first time, and then, as their relationship swiftly develops, he hardly looks at her, and in speaking the poetry of love, he does it aggressively instead of lovingly – sometimes petulantly – as though he’s been forced into noticing her. While standing below her balcony a light comes on and she emerges from her room. Romeo gasps at her beauty and says “It is the east, and Juliet is the sun,” but MacCormack isn’t even looking at her. He is looking up, over the audience’s heads, to some spot in the sky. That is something he does almost every time he is talking to or about Juliet. When he gets the news of his banishment there is nothing of the anguish the teenager feels when he is cut off from his life, his family, his friends and from Juliet, something worse than death. He rattles off the lines, and that’s that.

All in all, though, this as an enjoyable evening at the theatre. The energy, vitality and thrust of the performances is engaging. There are some disappointments but there are things that could make walking for miles around the outer and inner circles of Regent’s Park worthwhile. Above all of those things is the pleasure of encountering the perfect Juliet as Shakespeare made her.

Is ‘The Gods Are Bastards’ A Shakespeare Phrase?
Scroll to top