You are here: Home1 / Welcome To The No Sweat Shakespeare Blog!2 / Historic Shakespeare3 / Shakespeare & The Ancient Game Of Real Tennis

Although Shakespeare was very familiar with tennis, if he had gone to Wimbledon as a spectator he would not have recognised the game. He would have gasped at the lightness and speed of the ball for a start. The tennis balls he knew were made of wood, or, in some cases, leather stuffed with grains of wheat.

He would have been more comfortable with Centre Court than with the other courts, as tennis in his time was an indoor game. You needed walls, as you had to play the ball off them – including the alcoves and the sections that jutted out, and the scoring was related to where the ball travelled, what it bounced off, how many times it bounced and so on.

The game was known as ‘real tennis.’ The Queen’s father, Henry VIII, built a real tennis court at Hampton Court. The original burnt down but another one was built later. It is still there and one can visit the house and see the tennis court – if you become a member you can even play in it! 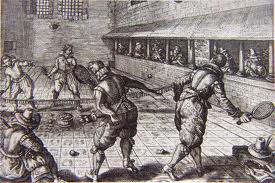 A group of men play ‘real tennis’ in front of onlookers

The game, popular among French aristocrats, spread around Europe. It had originated in mediaeval Italy where it was a leisure activity of monks. They played with wooden balls which they hit with their hands. The French used leather gloves at first, which they later attached to sticks, and there you had the first rackets.

Outdoor tennis came very slowly as the balls could be played only on a hard surface – lawns would be destroyed by the large, solid balls. It was only when rubber came into use that tennis was played on the lawn and the modern game was born. And so… Wimbledon!

Shakespeare has a great scene in Henry V (Act 1 scene 2) where tennis is the central metaphor (see our top 20 Shakespeare metaphors here). It’s perfect as a way of talking about something: in this case the relationship between two countries at war, with words like ‘balls,’ and ‘hit’ and ‘court.’ The French ambassador comes to Henry’s camp with a gift of tennis balls from the Dauphin. Henry interprets that as a threat and he issues his own threat.

‘We are glad the Dauphin is so pleasant with us;
His present and your pains we thank you for:
When we have match’d our rackets to these balls.
We will, in France, by God’s grace, play a set
Shall strike his father’s crown into the hazard.
Tell him, he hath made a match with such a wrangler
That all the courts of France will be disturb’d
With chases.’

It’s a beautiful piece of writing by any standard – one of Shakespeare’s finest passages. It also makes a good scene visually and can be amusing, with tennis balls rolling around the stage.

The term ‘rally’ in modern tennis, refers to the knocking of the ball between the players: it was ‘bandying’ in Elizabethan times. There’s a lovely line in King Lear where Goneril’s servant, Oswald is insolent to Lear. Lear says: ‘Do you bandy looks with me, you rascal?’ How perfect a description is that?

Tennis is referred to several times in Shakespeare’s plays. In Hamlet Polonius refers to ‘falling out at tennis.’

Yes, Shakespeare would find a day at Wimbledon very interesting. He would also no doubt enjoy the early summer weather, the beauty of the surroundings and the strawberries and cream.

Shakespeare & The Beautiful Game of Football

How Many Plays Did Shakespeare Write?
Scroll to top