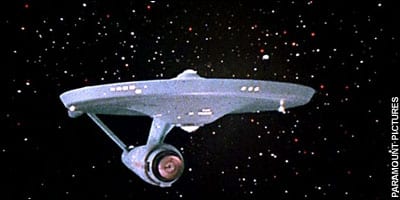 Two of the most lasting and influential phenomena in Western culture are the plays of Shakespeare and the science fiction series Star Trek. The science fiction series touches Shakespeare at many levels, over and over again. Some of Shakespeare’s plays look as though they could be episodes of the series and some of the episodes of Star Trek draw on Shakespeares stories. We immediately think “Macbeth” when in the episode Catspaw the crew of the U.S.S. Enterprise beams down to the surface of the planet Pyris V11 and are confronted by three witches who chant:

Characters in the series quote Shakespeare, episodes are titled after his works, and stories are adapted to fit the futuristic space arena. The Klingons quote Hamlet, both in English and in their own fictional language, into which language Shakespeare has been translated.

Captain James Kirk is Macbeth, Hamlet, Ferdinand, and Petruchio at different times. As he is always the winning hero, though, he has the ability to defeat the villain, even when the Shakespearean characters could not. For example, in the episode ‘Catspaw’, Kirk is essentially Macbeth, but, unlike Macbeth, here he has the ability to resist the evil pressure of the Lady Macbeth figure of Sylvia.

Within the framework of the original series, The Next Generation series and the films, Shakespeare has become an integral part of the universe that Star Trek inhabits. The series uses Shakespeare as a major reference to introduce new ideas and to maintain a connection with the future and the past.

Dagger of the Mind
The title is a reference to Macbeth.

The Conscience of the King
The title is a reference to Hamlet. There is more in this episode as the main plot concerns a travelling troupe of Shakespearean actors.

All Our Yesterdays
The title refers to Macbeth.

By Any Other Name
The title is a loose adaptation of Romeo and Juliet. Kirk makes additional reference while talking with a woman as he holds out a rose-like flower and says, “As the Earth poet Shakespeare wrote, ‘That which we call a rose by any other name would smell as sweet.’

Whom Gods Destroy
The character of Marta quotes Shakespeare’s Sonnet 18.

Elaan of Troyius
Here the plot is lifted straight from The Taming of the Shrew with Kirk playing the part of Petruchio.

Catspaw
The plot of this episode borrows parts of Macbeth.

The connection between Shakespeare and Star Trek are numerous. Both William Shatner and Patrick Stewart were trained as Shakespearean actors. Some say that Shatner never made the transition in style from stage acting to television acting. His overacting and wild gestures are more suited to the stage than the TV set, where the camera picks up every move.

Gene Roddenberry was a Shakespeare fan.

General Chang, the Shakespeare-quoting Klingon from Star Trek VI, was played by Christopher Plummer. Plummer is an accomplished Shakespearean actor. He played Macbeth in a 1988 Broadway production of the play.

And so it goes on… where no Bard has been before!!