The Roman Empire tried to crush the Jewish faith in the region where most Jews lived, now known as Israel. That resulted in a mass exodus as Jews moved to places where they would be less vulnerable to persecution. Many places they went, however, they were resented, and terrible crimes were committed against them.

By the time Shakespeare was writing Jews had been banished from England for 300 years. They had come to England following the Norman conquest in the 11th Century and two hundred years later they were expelled by Edward I. Their persecution continued in Europe where they were regarded as heretics, interrogated by the Spanish Inquisition and, for the most part, burnt at the stake.

Jews were demonized so thoroughly over the centuries in England that by the time of the reign of Elizabeth the image of a Jew was a creature that was barely human – dangerous, reprehensible, treasonous, physically repulsive and completely undeserving of respect. There were still a few in England and they were tolerated only because they had been converted, but they were shunned. In 1577 John Foxe, author of Book of Martyrs, preached a sermon at the public christening of a Jew. In it, he articulated some of the disturbing beliefs about Jews that Elizabethans held –  their ‘heinous abominations, insatiable butcheries, treasons, frenzies, and madness’; their practice of ritual murder; their savage abduction and murder of Christian children; their seduction of  Christian women and their unremitting lust. 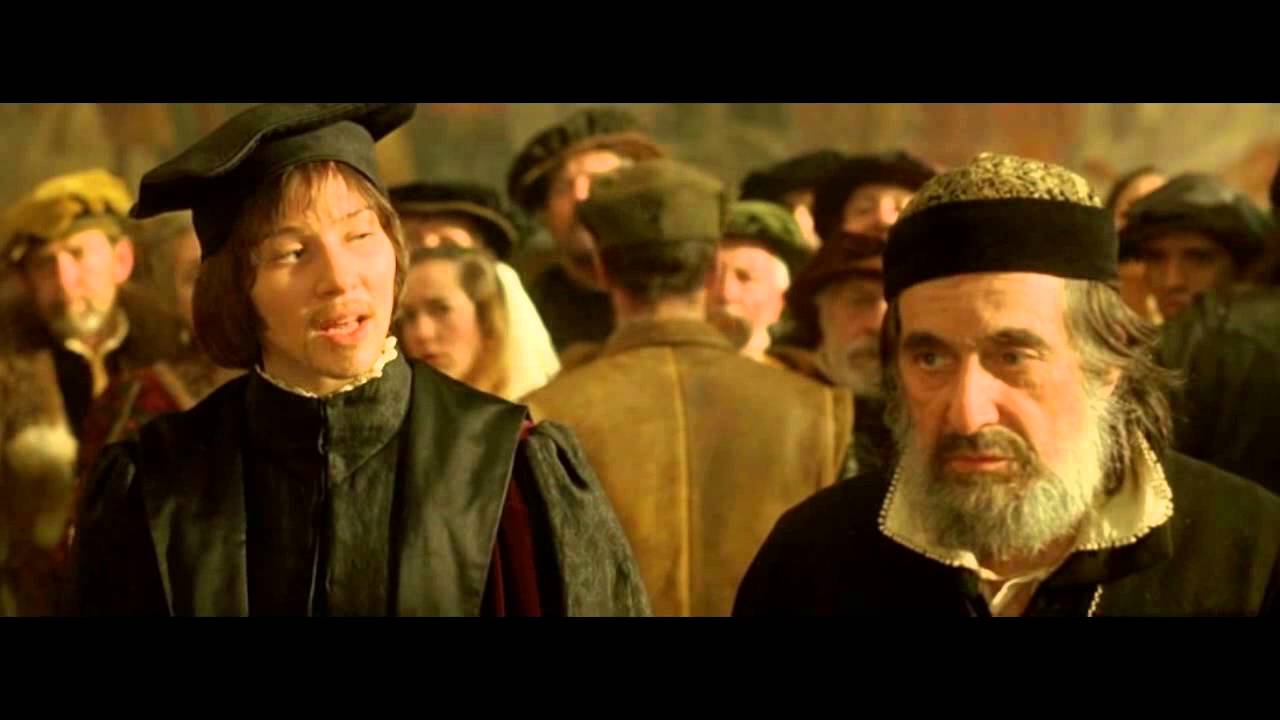 Few members of an Elizabethan audience had ever met a Jew but if an actor were to appear as a Jew on the stage in one of the theatres he would have been met with the conventional greeting of stage villains – boos and catcalls. In any depiction of conflict with the Christian community he would have been at a disadvantage regarding audience sympathy.

Jews were not often portrayed in the Elizabethan theatre but there are two notable examples of Jewish protagonists: Barabas in Christopher Marlowe’s The Jew of Malta and Shylock in Shakespeare’s The Merchant of Venice. Barabas is portrayed as cunning, greedy and murderous, thus feeding the expectations of the audience, whereas Shakespeare’s depiction of Shylock turns those expectations on their head, as one would expect from Shakespeare. Shylock is a complex and fully rounded character and very much like his Christian opponents in his humanity, except that he is a hated Jew. Shylock delivers one of Shakespeare’s best speeches, in which he makes the case for a shared humanity among Jews and Christians.

Shakespeare has sometimes been accused of being anti-Semitic because of Shylock’s insistence on cutting a pound of flesh – including the heart – from a Christian, and being serious about it. But there are also those who suggest that Shakespeare is racist because he has a black man murdering his wife, and that he is misogynistic because he has women behaving in certain ways. But Shakespeare is none of those things.

It is impossible to know what Shakespeare thought about any social issue. He doesn’t take sides and he doesn’t do anything to press his own views, whatever they may be. What he does is present life as it is, with people of all kinds as they act out the hours and days of their lives. His characters encounter situations and respond to them. That’s what we see in a Shakespeare play. There is no philosophy in Shakespeare – only warm, breathing humanity.

The Merchant of Venice is set in Venice, a wealthy city, where Jews are not banned, but also not free to pursue any occupation they like. Money lending is one of the trades allowed so there is a thriving community of Jewish moneylenders living in the Jewish quarter of the city.

Antonio, the merchant of the title – a somewhat insipid member of the Christian community – has a cash flow problem. His best friend needs money in a hurry as he wants to woo a wealthy woman and get her before she’s snapped up by someone else, and Antonio wants to help him. But his ships are not yet in and he has no money. His solution is to approach a moneylender for a loan until the ships arrive in port. He goes to Shylock, who hates the Christians of Venice and would not socialise with them even if they were to invite him to do so. He will do business with them, however, and is happy to lend Antonio the money, but Antonio insults him and name-calls him, so Shylock gets a bit annoyed. He puts a penalty on any late repayment that may arise and jokingly proposes that if Antonio’s ships are late he will give Shylock a pound of his flesh. Antonio sees that as ridiculous, but he’s in a hurry for the money and agrees.

Shylock has a daughter, Jessica, who has fallen in love with one of Antonio’s Christian friends and is conducting a secret affair with him. Bassanio, the friend for whom Antonio has borrowed the money, gets the girl he’s after,  and the Christians celebrate. Jessica elopes with her Christian lover and joins the celebrations. But then, the news comes that Antonio’s ships have been wrecked, and now he’s unable to repay Shylock. With his daughter stolen by Christians (a nice reversal of the audience’s idea that it’s Jews who seduce and abduct Christian women) Shylock is enraged – bent on revenge – and the prospect of taking the pound of flesh becomes a reality.

The matter goes to court and, having to endure further insults throughout, Shylock wins his case but just as he’s about to cut Antonio’s heart out the judge warns him that it’s an offence to shed Christian blood and the penalty for that is death. As the cutting out of the flesh will shed blood Shylock gives in but he’s then told that it’s a crime to threaten a Christian and for that the judgment is that he has to forfeit his wealth and give it to his daughter and her Christian lover, and that he has to convert to Christianity – the most intolerable penalty of all. He has to do that and the play ends with his deep humiliation.

What we have in this play, is not a villainous Jew but a persecuted man who makes a mistake under pressure. What we also have is a thoroughly nasty, merciless set of Christians who use their privileged social position to take advantage of a Jew and to destroy him without any compassion. We can identify with the Christian characters because they are a lot like us and they are a lot of fun. Shakespeare is going out of his way to make their story romantic and entertaining, but when we look beyond that to what they are really like and become aware of what they are doing we can see that Shakespeare is showing us a deep social reality in which persecuted and persecutors act in the way they do in real life. The persecutors seldom come out well in such tales. Beneath the glitter and romance of the wealthy Christian life of Venice, beneath the glamour of it all, is a nastiness seldom found in a Shakespeare play. Any idea that this play demonstrates any anti-Semitism on the part of its author is ridiculous. What it demonstrates is what it was like to be a Jew in Elizabethan times and what it means when a Jew takes on the Christian establishment.

Although Shakespeare never told anyone what his views were about Jews, if he was able to write a play like The Merchant of Venice he could not have had an anti-Semitic bone in his body.

Shakespearean Language and His Reign of Awesomeness

Shakespeare’s Use of Mythology
Scroll to top