Shakespeare & The Beautiful Game of Football

You are here: Home1 / Welcome To The No Sweat Shakespeare Blog!2 / Historic Shakespeare3 / Shakespeare & The Beautiful Game of Football

When William Shakespeare was a teenager he probably played football with the other village boys in Stratford, even though the game’s legality was a grey area – or more accurately, a banned game that wasn’t being policed. He certainly was familiar with the game as he refers to it in his plays. But the sport that is now the world’s most popular goes back much further than Shakespeare.

The earliest mention of the game is in 2,500 B.C. in China where it was played as part of the celebration of the Emperor’s birthday. It’s mentioned frequently in ancient Greek and Roman Games from 300 B.C. and it comes to England from Italy.

The game was banned by King Edward II in 1314. He called it a ‘mob game:’ at the time that young William was kicking about with his friends it had not been unbanned. They used a blown up pig’s bladder filled with beans that made a rattling noise as it was kicked about. Later, they tied leather around it. Little did William Shakespeare and his teammates know of how big and universal the game would become, and how it would fire up even more passion than can be found in all the plays that William was going to write put together. 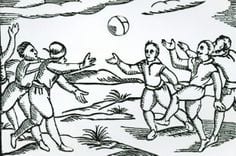 Ball games were not the most popular games in Shakespeare’s time – the Elizabethans preferred shooting or throwing things at targets, from push ha’penny to archery. The ball games were tennis and bowls – two gentle, refined games. Football was feared by the authorities because it caused far more injuries than other games and, worse, riots… something that it still has the power to do today.

It wasn’t the beautiful game in Elizabethan England – it was the deadly game.

There were no rules and no fixed number of players per team, and anyone who wanted to joined in. It was a rough and tumble sport and the players tackled each other with everyone piling on.

A fifteenth-century headmaster, Richard Mulcaster,  wrote, on his retirement in 1508, about the value of football in his schools:

‘the football strengtheneth and brawneth the whole body but it is now commonly used, with the thronging of a rude multitude, with bursting of shins and breaking of legs’

In a seventeenth-century book, Anatomie of Abuses, Phillip Stubbes wrote:

He went on to describe its effects, and we realise when reading that not much has changed in the past half-millennium:

When Shakespeare went to London and began his writing career he probably didn’t have the leisure to play football and then, of course, he became too old for such pursuits. But as with all his early experiences and observations, he used football to make the images that fill the pages of his many works.

In King Lear (act 1 scene 4) Lear’s daughter Regan’s servant is being insolent to Lear. Lear’s protector, Kent, strikes him, and when he protests and says ‘I’ll not be struck, my lord,’ Kent trips him up and says, ‘nor tripped neither, you base football player.’ He’s acting out the rough play that Shakespeare experienced in games of football.

In The Comedy of Errors when the servant Dromio complains of his treatment by his masters he puts it like this:

‘Am I so round with you as you with me,
That like a football you do spurn me thus?
You spurn me hence, and he will spurn me hither.
If I last in this service, you must case me in leather.’ (Act 2, Scene 1)

Although Shakespeare would not recognise the rules and structure if he came back and watched a game of football on TV today, he would recognise the passion. He would be surprised by how universal it was, and probably shocked by how tame it had become.

Shakespeare & The Ancient Game Of Real Tennis
Scroll to top