Top 5 Shakespeare Bromances: Who Do You Ship?

You are here: Home1 / Welcome To The No Sweat Shakespeare Blog!2 / Random Fun Stuff3 / Top 5 Shakespeare Bromances: Who Do You Ship?

Shakespeare created some of the most famous romantic couples in literature: Romeo and Juliet, Antony and Cleopatra, Othello and Desdemona, etc.

But what about the Shakespeare bromances? Those are pretty abundant in the Bard’s works, too. From his sonnets, some of which are written to a handsome boy called the “fair youth,” to his plays where the male pals share some pretty intimate moments, Shakespeare’s works are full of male love of all kinds.

But which of those male bonds achieve the true status of the “bromance”? Here are a few of our favorites. 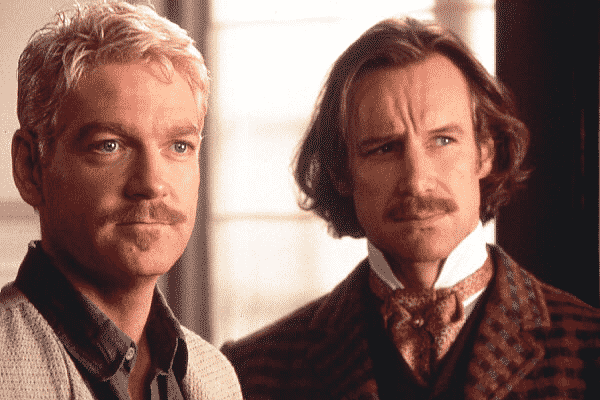 Kenneth Branagh as Hamlet and Nicholas Farrell as Horatio in Hamlet (1996).

We couldn’t begin this list with anyone other than the OG, ultimate Shakespeare bromance: Hamlet and Horatio from Hamlet. Whether you think that Hamlet and Horatio are best friends or… a little something more is up to you, but one thing’s for sure: they have a whole lot of affection for each other.

Horatio looks out for Hamlet from the beginning. Claudius may bring in Rosencrantz and Guildenstern to be Hamlet’s “buddies,” but they’re sort of like those guys you meet at welcome week at school and then occasionally sit with in the dining hall. Horatio is a true friend, there for Hamlet whenever he needs him.

That said, Horatio’s friendship with Hamlet may border a little too on the trusting side, which sends it into the world of bromance. Hamlet acts crazy crazy. He does a lot of terrible things — stabbing Polonius, degrading Ophelia, killing Rosencrantz and Guildenstern, and apparently a bunch of pirates (what is that plot point??), etc, but Horatio still sticks by him.

That’s not to say that we shouldn’t hold our loved ones accountable — in fact, his blind love for Hamlet is probably one of Horatio’s biggest flaws — but it does show how much he cares for him. In fact, when it looks like Hamlet is going to die, Horatio is ready to give up his own life, too; like Juliet, he searches for any drop of poison left to drink so he can die, as well. But Hamlet, who is still hanging onto life, uses one of his last actions to stop Horatio from drinking the rest.

Then comes the most important bromance moment: Hamlet trusts Horatio to tell his story to the world after he is gone. In some of his last words, Hamlet pleads:

If thou didst ever hold me in thy heart
Absent thee from felicity a while,
And in this harsh world draw thy breath in pain
To tell my story. (V.II.343-346)

And, so, while he wants nothing more than to be with his dear friend, Horatio lives on to tell his tale. That’s a heart-wrenching bromance.

Mercutio and Romeo, Romeo and Juliet 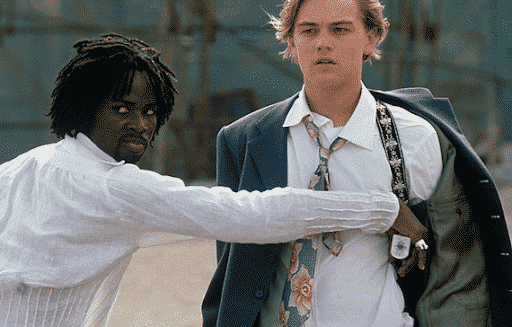 So, you could set Mercutio up with a couple of guys in Romeo and Juliet. Mercutio and Benvolio, Mercutio and Tybalt… we’ve heard all the ships. But for now we’re gonna stick with Mercutio and Romeo.

Mercutio is an interesting character in that he talks a lot about love and sexuality, but we never see him expressing any desire himself. He eschews romantic love, telling Romeo when he seems to have gotten over Rosaline, “Why, is not this better than groaning for love? Now art thou sociable. Now art thou Romeo” (II.IV.37-39).

Actually, Mercutio spends a whole lot of time either trying to dissuade Romeo from loving women or making fun of him for being in love. Yeah, he could just be messing with him… but it seems like Mercutio doesn’t like this romance getting in the way of his bromance. He either wants Romeo the pal back, orrrrr he just wants Romeo for himself.

Romeo, for his part, definitely loves Mercutio dearly as a friend. What else but Mercutio’s death could make him so thoroughly lose his mind that he’d murder his wife’s cousin after they’ve been married just three hours?

In fact, Romeo doesn’t just want to murder Tybalt as revenge for Mercutio’s death; when Romeo confronts Tybalt he cries, “either thou or I or both must go with him,” meaning he would give his own life if it meant revenging Mercutio’s death (III.I.91).

For a guy who is obsessed with Juliet as Romeo is, he seems pretty willing to give up his life out of grief and vengeance for his friend. Either way, this is a tragic story of both a romance and a bromance ended by death. 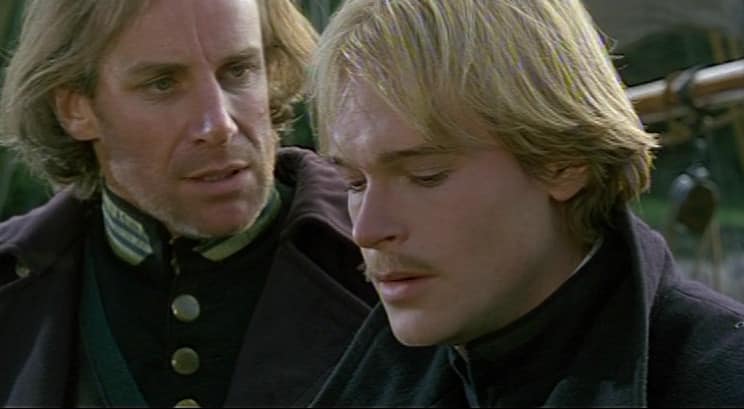 Okay, this is one of the clearest cases of Shakespeare bromance verging on romance. At least for Antonio.

In Twelfth Night, Sebastian and Antonio are not main characters by any stretch — but their bromance packs a punch. Sebastian is the twin brother of Viola, the main character in the play. They were separated in a shipwreck, and both eventually end up in a land called Illyria.

Between the shipwreck and landing on Illyria, Sebastian befriends a pirate named Antonio. Antonio outright professes his affection for him, crying, “If you will not murder me for my love, let me be your servant” (II.I.34-35). So you know this guy is serious.

When they get to Illyria, Antonio lends Sebastian some money and tells him to go exploring. When Antonio goes to look for him later, he instead finds Viola in the midst of a sword fight. Naturally, Antonio goes in to defend her, thinking that she’s Sebastian — and he gets arrested ‘cause he’s a pirate with warrants and all that. He asks for some of the money back, but of course Viola has no idea what he’s talking about.

Antonio feels betrayed, and is humiliated that “Sebastian,” whom he loves, refuses to recognize him. In the middle of being arrested, Antonio begs the officers to pause for a sec so he can make a little speech:

Let me speak a little. This youth that you see here
I snatch’d one half out of the jaws of death,
Relieved him with such sanctity of love,
And to his image, which methought did promise
Most venerable worth, did I devotion. (III.IV.325-329)

He then goes on to moan about how evil lies in beauty, because he thinks that Sebastian is forsaking him. If that is not a man head-over-heels in love — even more than regular bromance standards — I don’t know what is. 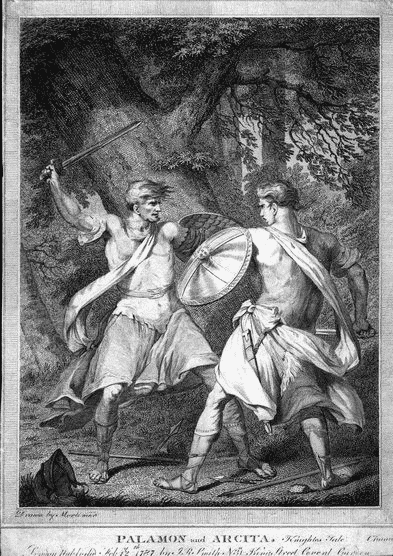 Arcite and Palamon battling in an early drawing of their fight depicted in The Canterbury Tales.

Okay, this one is a little weird. These dudes are cousins. Like, blood-related family members. But the bromance is so real.

They get imprisoned together at the beginning of the play, which you’d think would make them pretty angry — but, because they have each other, they find a way to make it joyful. Arcite even points out (as a good thing) that it’s like they’re married, saying, “We are one another’s wife, ever begetting / New births of love,” to which Palamon responds, “Is there record of any two that loved better than we do, Arcite?” (II.II.88-89; 124-125). Um, this is one intense bromance.

Now, of course, something had to happen to break these bosom friends up — and it comes in the form of the queen’s sister, Emilia. They both fall absolutely in love with her (even more than with each other), and despite saying that nothing will break their friendship they literally plan to kill each other over Emilia.

But as they suit up to fight each other to win their bride, they still can’t quite shake the old bromance-y feelings. They put on each other’s armor for each other, the whole time commenting on how it fits, how it looks, praising memories of each other’s battle skills, etc. Palamon even asks Arcite, “How do I look? Am I much fallen away?” to which Arcite replies, “Faith, very little; love has used you kindly” (III.VI.91-92).

So, basically, Palamon is asking, “Hey dude, do I still look good” and Arcite is saying, “Oh yeah, super handsome, man.” While they are gearing up to BATTLE each other. How much more bromance-y can you get??

Leontes and Polixenes, The Winter’s Tale 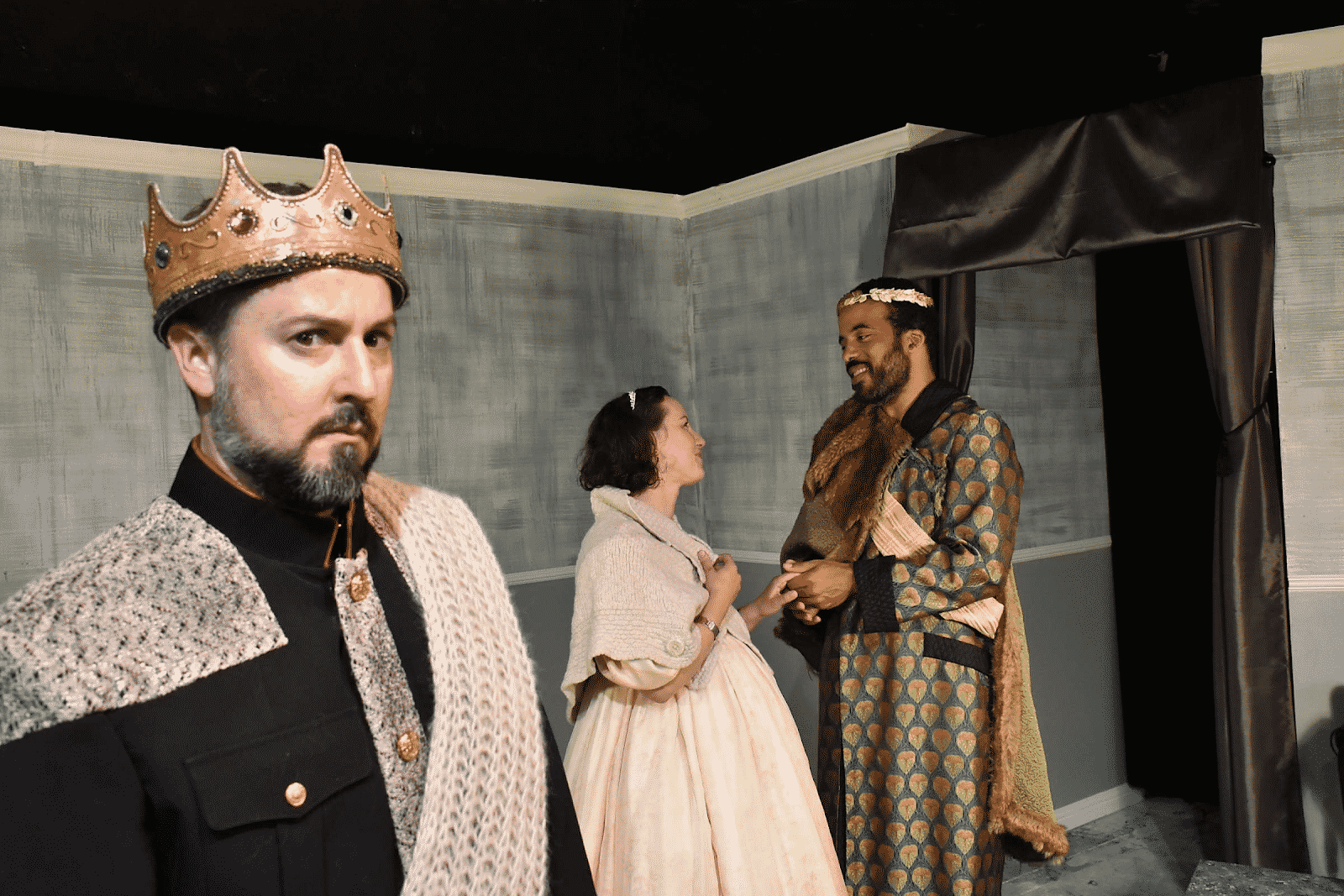 This is a Shakespeare bromance that stands the test of time — until jealousy takes over. Leontes and Polixenes, kings of Sicilia and Bohemia, were childhood friends. Leontes’ man Camillo says that Leontes and Polixenes “were trained together in their childhoods, and there rooted betwixt them then such an affection which cannot choose but branch now” (I.I.23-25). So, we know they have a long bromance history.

The play begins with Leontes trying to convince Polixenes to stay in Sicilia for another month (yeah, people’s visits were long back then). When he is unable to persuade him, Leontes’ wife Hermione steps in to ask, and Polixenes relents.

This, for some reason, sends Leontes into a flying rage, and he becomes convinced that his wife is cheating on him with Polixenes and that’s why he agreed to stay when she asked.

Leontes’ sudden turn to jealousy is abrupt and puzzling for a lot of readers and viewers, but it makes a little more sense if we think about it from a bromance perspective. Maybe it’s not just that Leontes is jealous regarding Hermione’s fidelity (which, of course, is completely intact), but rather that he’s jealous that Polixenes might prefer her company to his. Bromance drama!

All the “bromances” where a girl is dressed as a boy and a man seems to fall in love with her anyway. These include:

Which of these bromances do you feel most passionate about? Let us know in the comments below!

7 Skills to Master to Become a Prolific Writer

The Romeo and Juliet Story
Scroll to top