You are here: Home1 / Welcome To The No Sweat Shakespeare Blog!2 / Authorship Debate3 / Shakespeare The Collaborator 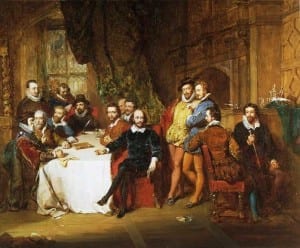 Shakespeare and his collaborators

Three years after his marriage to Anne Hathaway William Shakespeare went to London. He went there specifically to get a job as a player in one of the theatres. The grammar school he had attended had a tradition of putting on plays on the last day of term, and he had also seen plays performed by touring players who had visited Stratford during his childhood. It’s evident that as he was growing up young William had substantial exposure to the theatre, and perhaps the desire to be a part of it had played on him and eventually become irresistible.

Once in London he was taken on by one of the foremost acting companies, The Chamberlain’s Men, and over the years he worked his way up from bit-part actor to main playwright and part-owner of the company, making himself a very wealthy man.

Today he is known exclusively as a playwright. In spite of his various talents that’s how he is remembered, and always will be. Not only that, but perhaps as the greatest writer in the history of English letters.

We have had an idea of Shakespeare for a long time as the writer of the greatest plays in our culture, but as time has passed evidence has emerged that the Elizabethan and Jacobean writing scene was not quite as we have envisioned it: it was far more collaborative, with the writing of plays being corporate projects, much like the production of Hollywood movies, where a team of writers work together to produce a script.

And so it was with the Elizabethans and Jacobeans: the top playwrights worked together, and modern scholarship, with the help of computer programs, has endorsed that.

We think, now, that Shakespeare, a bright-eyed, enthusiastic young man, obviously intelligent, and committed to the theatre, was the right young man at the right time. A playwright, in a tight corner, with a deadline looming, spotted him and roped him in to help him get a play out in time. Perhaps it was Marlowe. We know that Shakespeare knew him and some scholars think that he was the one who got Shakespeare into writing plays.

Young William Shakespeare was obviously a fast learner and soon he was going solo. Perhaps he worked with a few others before gaining enough confidence to attempt his own plays, but eventually, he was working on big projects of his own – the plays we all know and love. We know now, though, that even then, other writers were involved in the production of those texts. And we also know that, even while he was writing his great plays he was working on the projects of his contemporaries. And, even after his retirement to Stratford, he still worked with younger up-and-coming dramatists on their plays. So any talk of The Tempest being his last play, and his farewell, and that Prospero is, in fact, a self-portrait, is nonsense, as he continued to work on texts with other writers until his death.

If Shakespeare were to come back today, and find himself sitting on the couch of an interviewer on a cultural television programme, he would probably laugh at the idea that he was the greatest writer in history. He would tell you that he never came up with an original story, and everything was copied from history books and old tales and, indeed, other playwrights – everything to be done as quickly as possible to pull in the audiences. He would say that he invented new words with abandon, thoroughly disrespecting the English language.  And he would tell you, moreover, that he passed his manuscripts around among his writing friends, and that they made comments and changes, and finally, among them all, they came up with something that would bring the crowds into the theatre. And he would tell you that he did the same for them. And he would probably add that he had laughed all the way to the bank.