You are here: Home1 / Welcome To The No Sweat Shakespeare Blog!2 / Historic Shakespeare3 / Shakespeare Furnishes His House

As we are products of our time and our culture, when we think about furnishing our house or our apartment we’re often thinking as much about the furniture’s design as its function. Furniture is considered a form of decorative art these days: it may even serve a symbolic or religious purpose, so when we go shopping for a bed, for example, we’re in the world of designer furniture where furniture designers vie with each other for our attention. We may choose a theme, such as reproduction furniture of a particular era, or we may decide on a theme and shop around to match all our bedroom furniture to that.

When Shakespeare was furnishing his house he may have done one of two things: he may have had a bed made or he may have purchased a second-hand bed. Second-hand beds were not easy to come by because once you had a bed it stayed in the family forever. Unlike us, he couldn’t go shopping in a huge furniture emporium or even in a local furniture shop, as there were no such places. He would have had to find a carpenter, explain what he wanted and the carpenter would make it. 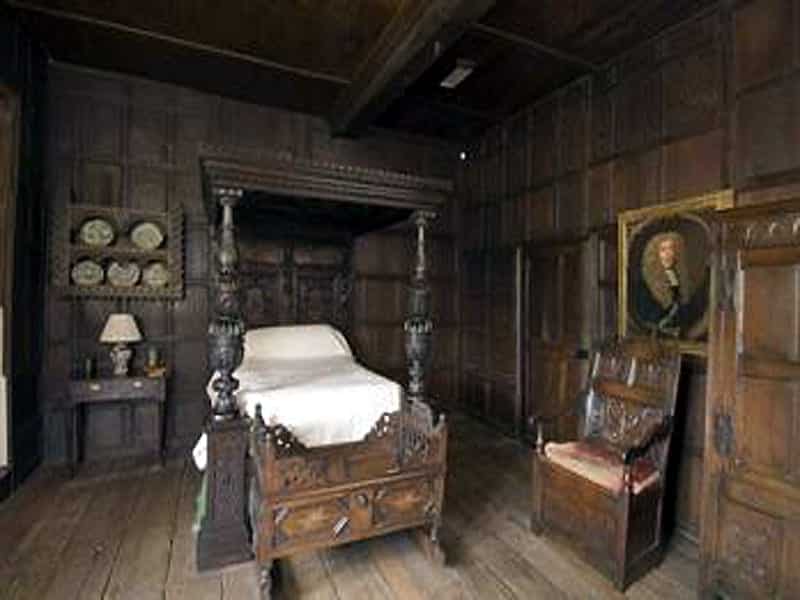 The carpenter would get to work and make a bed according to the conventional design, which he was used to churning out. In spite of Shakespeare’s huge imagination, we would not have imagined anything other than an ordinary, functional bed. He may have asked for a marital bed for himself and his wife and he would have got one wide enough for two people with four posts that would accommodate curtain screens for privacy. He would have needed a table and chairs, some cupboards, and in his case some form of shelving for his books. He would have had to have a baby’s cot and some smaller beds for the children. The kitchen table would have been quite large because families usually had more children than we do today. The table would have had a loose top which could be turned over and used on both sides. One surface was used for meals, and when the meal was over the top would be turned over, showing perhaps a less cut and scarred surface. That’s where we get the word ‘board’ referring to lodging somewhere where meals are included, such as ‘bed and board’ or ‘boarding house.’

Shakespeare would go to the carpenter’s house, where the ground floor was a workshop full of timber and tools, the smell of sawdust, and wood chips all over the floor. The carpenter and his family lived upstairs. In Shakespeare’s time, everything was produced by craftsmen and that’s how they arranged their work and domestic lives. Shakespeare, too, as he was growing up, would have lived like that. His father was a glove maker and the ground floor would have been taken up with glove-making equipment and different types of leather. His father would have laid the gloves out on the windowsills to attract the eye of passers-by. The shop windows that we pass every day are a development of that practice.

One of the things that we definitely know about Shakespeare is that the only thing he left his wife in his will was his second-best bed. We know, therefore, that there were at least two main beds in the house. It seems a strange legacy, that second-best bed, but if we knew something about the culture of the time it wouldn’t be at all strange. If the family was well-off enough, as Shakespeare’s was by the time of his death, there would have been a guest bed, kept as new and smart as possible, and the couple’s marital bed would have been well used and less smart, due to years of wear and tear. So Shakespeare’s wife inherited the bed where she had slept with her husband for years, and where her children had been conceived and born. So she was given the bed she was used to and from which she could never be evicted. Shakespeare had many visitors from London in those last years of retirement, often very distinguished men like Ben Jonson, Robert Herrick and other famous writers of his time. He was clearly house proud and wanted to make a good impression on his guests so having a nice bed was important.

As Shakespeare became more prosperous he bought more property and so he would have had to make several visits to carpenters. He was a well-known figure in Stratford and the carpenters would have gone out of their way to please him. Imagine Shakespeare walking into your shop. What a thought!

It’s endlessly fascinating to read Elizabethan practices and customs in the plays of the time. If one shuts one’s eyes to the plots, action and characters of Shakespeare’s plays and looks for other things one can build an understanding of many aspects of Elizabethan life. The conventions of warfare, court life, relationships between the sexes, tavern life, and, indeed, a very wide range of daily life, are all there.

We can learn a lot just from the appearance of such ordinary things as specific types of oak furniture in Shakespeare’s texts. Heavy oak furniture was a central feature of the Elizabethan house. After the defeat of the Spanish Armada, there was a new feeling of security and wealthy Elizabethans began to surround themselves with the comforts that security brought. That included expensive and ostentatious furniture. As England was well supplied with oak trees that development was uncomplicated and fast. Those wealthy Elizabethans seem to have been particularly fond of their beds and spent huge amounts of money on them. Shakespeare, himself a wealthy man, took great pride in his beds, mentioning his second-best bed in his will. The best known surviving example of an expensive Elizabethan bed is the Great Bed of Ware – displayed in London’s Victoria and Albert Museum – so famous and remarkable, even in its own time, that it gets a walk on –or lie on – part in ‘Twelfth Night.’ It’s a massive oak piece, eleven feet square, with four sturdy oak pillars supporting a heavy oak roof from which draperies were hung to provide complete privacy, with plenty of room for energetic frolicking.

Do we ever think about the word ‘cupboard?’ It’s a strange word if we do think about it, isn’t it? It’s a piece of furniture where we store things that we use every day, like clothes, food, utensils etc., interchangeable, when in a modern kitchen, with the word ‘cabinet.’ In Shakespeare’s time it was simply a kind of table used for displaying the house’s best crockery, mainly the cups – hence its name. In Romeo and Juliet when Capulet is preparing for the party he instructs a servant to get the crockery from the ‘court cupboard.’ ‘Court’ might refer to a French design or it could simply mean short. The Elizabethan cupboard later evolved into something more like the cupboard we know today, with sides and doors.

There are countless interesting references to furniture in Shakespeare. My favourite is the chair. Elizabethans did not generally sit on chairs – they sat on stools. One of the main things that marked the head of the house out from the other family members and servants was that he was the only one who sat on a chair, at the head of the table. Everyone else sat on a simple stool. A chair was thus imbued with great importance. Kings sat on chairs, as did bishops, and so a chair was more akin to a throne than to a stool. We see in Macbeth, that at the banquet only the king, and perhaps the queen, sit on chairs –or thrones. Even the great thanes sit on stools. When Macbeth sees Banquo’s ghost and has a fit Lady Macbeth reprimands him and tells him ‘you look but on a stool.’ Later he reflects on the ability of one’s dead victims to come out of their graves and overthrow one, which he expresses as pushing us from our stools. The plays abound with references to stools. Even a king, when not in a formal court setting will call for a stool when he wants to sit down, for example in Henry IV part II where the king says. ‘Now fetch me a stool hither by and by, now, sirrah.’

We sit on chairs now, rather than stools but our chairs came from the stool rather than the throne-like chair. Stools developed backs and became known as ‘back stools.’ Those back stools evolved into the chairs we use in our everyday lives today. We find the chairs that came from the Elizabethan chair in royal palaces and cathedrals. And interestingly, a university professor, as the top scholar in a department, occupies a ‘chair’ in that subject, even though he or she may not actually sit on a special chair these days, but like his or her more junior colleagues, on the descendant of the back stool. The modern back stool has lost its name and, somewhere down the line, it’s taken on the grander title of ‘chair.’