You are here: Home1 / Welcome To The No Sweat Shakespeare Blog!2 / Historic Shakespeare3 / Shakespeare & The Knock Knock Joke

“Knock knock” jokes are the first jokes kids respond to and laugh at as their reasoning faculties begin to develop. The linguistic trick clicks in and they laugh. The ability to appreciate those jokes is probably the first sign of the sense of humour to come. And so responding to such silly jokes as “knock knock; who’s there? Cow says; Cow says who? No, a cow says mooooo!” and “knock knock; who’s there? Nana; Nana who? Nana your business,” and making up their own is a rite of passage to a more sophisticated sense of humour.

If asked where any literary reference originated, you would have a good chance of being right by answering “Shakespeare.” And in this case you would certainly be right. The wording is from Macbeth but it is far from being a joke, although the scene in which it appears is a comic scene.

Macbeth has just murdered Duncan, the king. It is very early morning and Macduff, having made arrangements with Duncan to wake him up before dawn to go hunting, has arrived at the castle gates. Macbeth is still in a state of shock at what he has done and his hands are drenched in Duncan’s blood. He and Lady Macbeth hear the loud knocking and as they take off to change their clothes Macbeth, already experiencing the guilt that is going to destroy him, says:

“Wake Duncan with thy knocking: I would’st thou could.”

The next scene is dominated by the porter whose job it is to keep the castle gates. He is woken from his drunken sleep and shuffles off to the gates, muttering to himself as he goes, irritated by this interruption of his sleep. He is a comic figure in this very dark play, and he imagines himself to be the porter at the gate of Hell. This is certainly a funny scene but also very serious because the evil perpetrated by Macbeth and Lady Macbeth has turned the castle into Hell. The Porter mutters:

“Here’s a knocking indeed! If a man were porter of Hell Gate,he should have old turning the key.”

The knocking gets louder and more insistent.

The porter says and opens the doors to Macduff, who then goes on to discover the body of the murdered king.

The phrase becomes a joke

In August, 1936 the entertainment magazine, Variety, reported that there was a new craze going viral in America – the “knock knock” craze. It spread to England when a radio performer, Wee Georgie Wood, began using “knock knock, who’s there?” as his catchphrase. But he didn’t actually use the joke format in his shows. 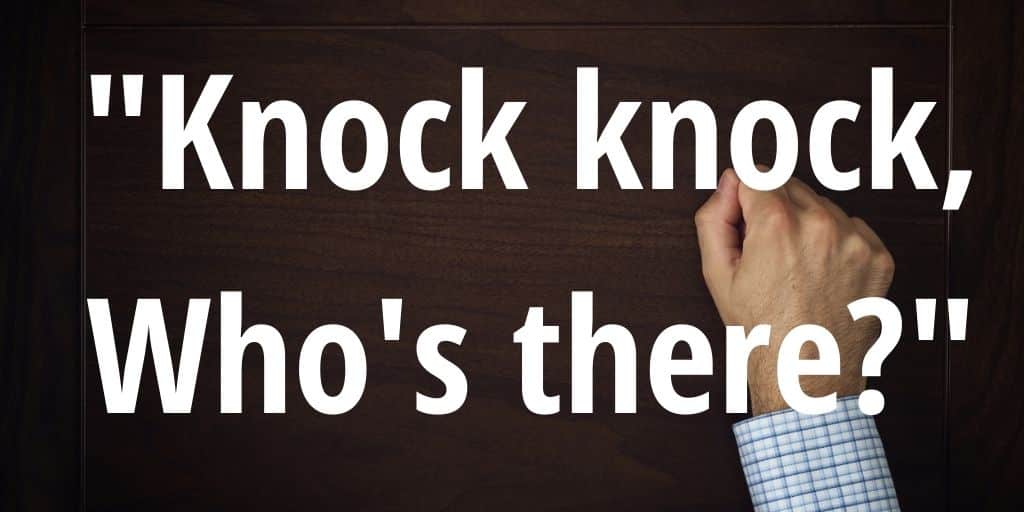 How did the jokes originate?

They began around 1900 in America, known as “Do You Know” jokes.”Do you know Arthur? Arthur who? Arthurmometer!” So they started as they finished with the knock knock jokes – very tame and silly, but perfect as a game to play with kids.

The craze evolved into the knock-knock jokes, helped by the popular Wee Georgie Wood’s catchphrase, popular in both the UK and the USA.

It seems very silly that the jokes became so popular but that joke was one of the prominent features of 1930s culture. They are considered unsophisticated and immature, and not even very funny these days – more corny than funny – but they are great for entertaining little kids.

There doesn’t seem to be any clear line of descent from the drunken porter’s irritated mutterings. The Macbeths’ deed and subsequent guilt has no discernable connection with the silly jokes. So although the wording originated in Shakespeare, the phrase never became a proverbial saying as such phrases as “neither a borrower nor a lender be,” or “you need a long spoon to sup with the devil” did.

Introducing Children To Shakespeare – A Midsummer Night’s Dream at The Globe...
Scroll to top