As perhaps the most famous English writer, but one who’s personal life is relativity little known about, it’s not surprising that a number of myths have arisen about Shakespeare. As time goes by we discover more and more about Shakespeare and so, although some of these myths persist, they are being busted one by one.  So, here are the top Shakespeare myths, exposed and debunked:

Shakespeare Myth 1: We don’t really know what Shakespeare looked like 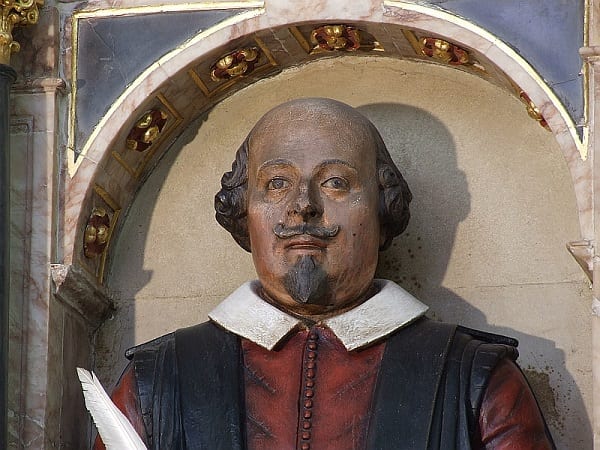 There are several portraits of Shakespeare that come with claims of authenticity. They’re very broadly similar – a high forehead and fairly long hair – and easily caricatured. But what Shakespeare really looked like is obvious: a few years after his death Anne Hathaway, his widow, commissioned a bust of Shakespeare to be placed above his tomb. She would have known what he looked like, as did the maker of the bust, who had known him. If we believe the sculptor Shakespeare was slightly chubby with a well-rounded face and a thick neck, a dark complexion, bald on top with fairly long, curled, hair at the sides, a goatee and a well manicured and twirled moustache. 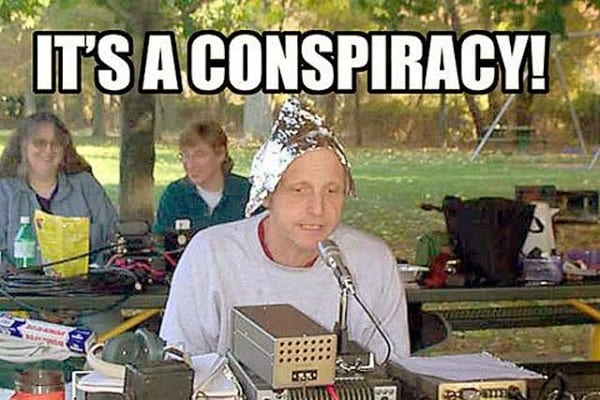 Perhaps the greatest myth about Shakespeare is that none of his works were written by him. There is an ongoing ‘authorship debate’ with some people thinking that a man with Shakespeare’s background could not have written the plays. However, there are a number of pointers…

only a man with a Warwickshire country background could have, because deep in the fabric of the language of the texts are the plants, insects, animals, customs and weather of Warwickshire. No high-born man, educated in the way gentlemen were educated, could have used the language of nature so effectively, with such detailed knowledge of the nature of a particular place. None of the candidates put forward as the author of the plays could possibly have written them. The people who deny Shakespeare cannot imagine that genius can come from such a background but in music and art, as well as writing, we see examples of just that if we look back in our culture. Very few Shakespeare scholars would now say that Shakespeare didn’t write the plays. 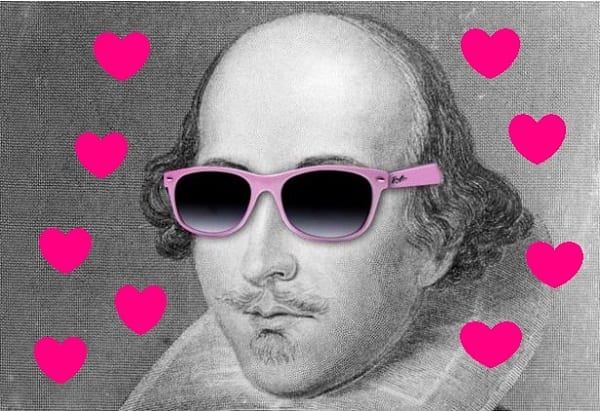 The thought that Shakespeare was gay tends to be based on the sonnets he wrote to a beautiful young man. These days straight men don’t address these sorts of poems to other men, but Elizabethan men had no such inhibitions: it was very common to refer to a man’s beauty, to praise his eyes and his skin etc. This was particularly so when the poet felt the need to flatter his patron, and it would not have been taken as sexual. And so it was with Shakespeare. Moreover, the strict line we draw between male and female is a relatively modern development in our culture. In ancient times and also Elizabethan times men were allowed to be attracted to other men without being thought of as deviant. A man could be completely heterosexual (an unknown concept to Elizabethans) but also allow himself to be attracted to a man. Shakespeare’s plays are full of such ambiguous sexuality, even among the most masculine of male characters.

Shakespeare Myth 4: We don’t know very much about Shakespeare, the man 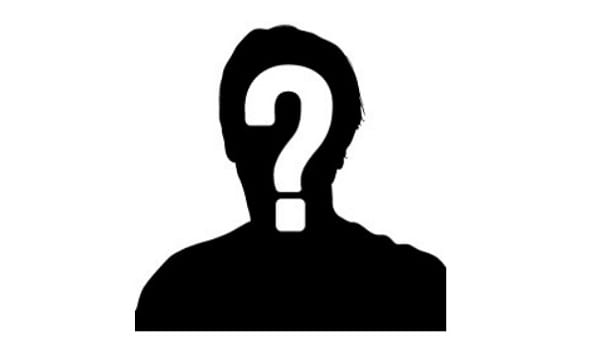 In fact we know a great deal about Shakespeare. Scholars have been unable to to find any personal or business writing by him, and his dramatic writing has come to us in roundabout ways, but a great deal of work has been done – particularly in the last century –  to find him, both in London and in Stratford, and it is surprising how much we do know. We know where he lived in both places, who he lived with and the things he did in both places. We know who his family members were and who his colleagues were. We have discovered several documents in which he is mentioned, including reports from people who knew him. 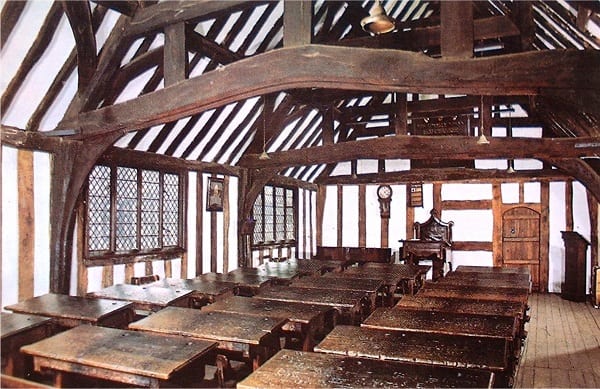 Shakespeare attended his local grammar school in Stratford-upon-Avon. Not everyone went to school and he was able to attend because his father was an alderman of the town and therefore privileged. The curriculum was rigorous and boys were taught Latin and Greek – and not only the mechanics of the language, they also studied the writers of those cultures. They were taught mathematics, logic and music as well. The standard of education grammar school boys would have reached was no different from that of aristocratic boys. As an adult Shakespeare read widely and acquired a knowledge of Greek and mediaeval drama, philosophical ideas and so on. He knew the latest thinking on scientific matters, and what was known about geography. And, he was, of course, extremely well read in history. 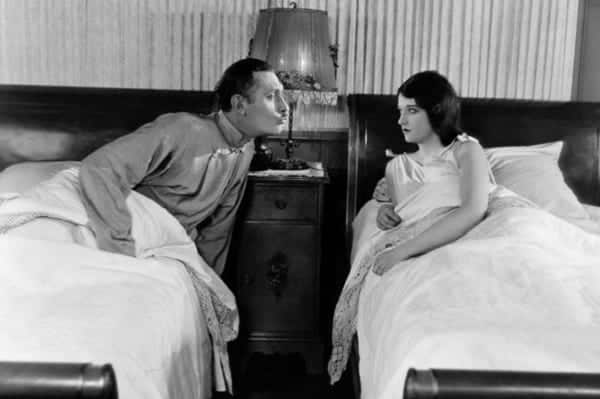 Of course we don’t know how Shakespeare and Anne got on from day to day but they produced three children. Their son, Hamnet, died aged eleven but they raised their two daughters to adulthood together. Shakespeare worked in London and went home regularly, where he conducted some business matters and enjoyed a family life. He also retired to Stratford and lived quietly with Anne. When he died she continued to live in the family home until her death. The myth may have arisen because he left her his second best bed in his will, though this was actually a gesture of affection. The best bed was customarily reserved for guests – the second best bed was where a man and wife slept together throughout their life together, and where their children were born. In his will he made sure that that bed would become indisputably her possession. 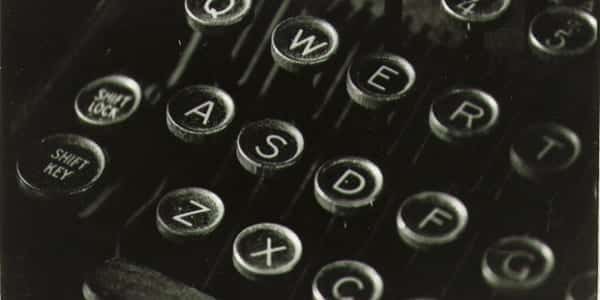 Unlike most other writers for the theatre Shakespeare was not a professional writer. He wrote part-time, very fast, to satisfy the needs of the theatre of which he was a director. It’s improbable that he was ever paid directly for a play. He was paid as an actor, and if anyone had asked his profession he would probably have said that he was an actor. He never became a famous actor like his friend Richard Burbage and it is assumed that he played only minor roles. Scholars think that he appeared in some of Ben Jonson’s plays and there is also evidence that he played the ghost in his own Hamlet. Shakespeare was multi-talented and seemed to have excelled at everything he did except, perhaps, in his profession of actor. He became rich in his position as one of the directors of the Globe Theatre. He also had business interests in Stratford. 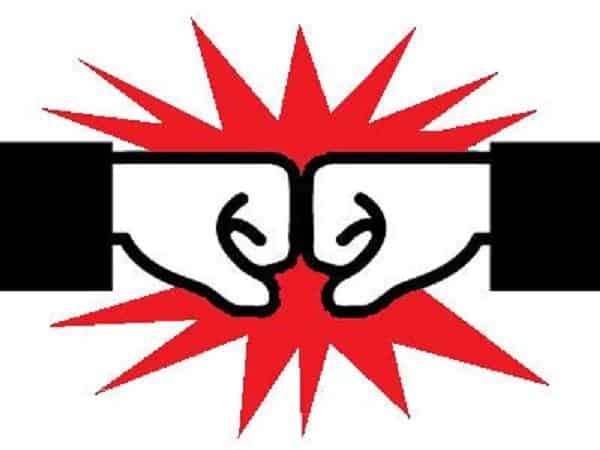 Although Shakespeare’s acting company – The Kings Men – played before the queen on more than one occasion there is no evidence that there was a personal meeting between Shakespeare and Elizabeth. Even if he had wanted that she would probably have considered herself so high above him that it could never have happened. He was an actor and there was a common perception in the Elizabethan era that actors were the lowest forms of life.

Shakespeare Myth 9: Shakespeare was the most popular writer of his time

During Shakespeare’s time plays were disposable, discarded after a few performances at the most. Theatre was big business and there were hundreds of playwrights working in London during the Elizabethan and Jacobean eras. The theatres were in fierce competition with each other, all desperate to bring audiences in, so they had to have new plays all the time. People went to the theatres regardless of who had written the play they were going to see. There were no ‘bad’ playwrights and if one looks at the surviving plays one sees a very high quality. They basically wrote to a formula, as did Shakespeare, and it is really only looking back that one sees how creatively Shakespeare worked within that formula, and how he subverted and stretched it. A theatregoer might like a particular writer’s plays although he would not necessarily know whether he was going to see one of them or not. Master Shakespeare was popular, as was Master Jonson and Master Kyd – and many others. Shakespeare did not become rich because he was a particularly good or popular writer but because he had shares in The Globe – one of London’s most popular theatres at the time.

It has been known for centuries that Shakespeare collaborated widely, both in plays that are credited to him and in some credited to other playwrights. In recent years scholars have been able to  use computers to analyse literary texts, and they have discovered a surprising amount of collaboration among the playwright community of London at that time.

Other writers who have been identified as collaborators with Shakespeare are Christopher Marlowe, George Peele (Henry VI Part 1 and Titus Andronicus), Thomas Middleton (Timon of Athensand Macbeth) and Robert Greene(Titus Andronicusand Henry VI, Parts 1 & 2, and also contributing toThe Comedy of Errors and The Two Gentlemen of Verona.)

There is also evidence that Shakespeare worked with many other playwrights on plays credited to those playwrights. 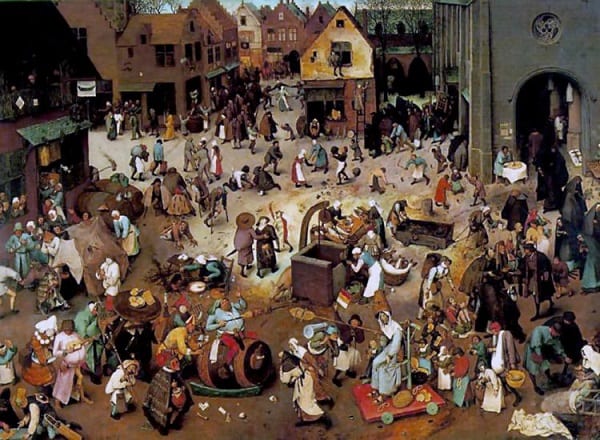 Shakespeare’s writing life straddled the reign of two monarchs, Elizabeth I and James I. His early plays were Elizabethan and are prime examples of Elizabethan literature and drama. Subsequently, during James’s reign new young writers were appearing, catering to the public taste for violence and intrigue. Shakespeare embraced those newcomers, befriended them and collaborated with them both on their plays and his. He learned from those Jacobean writers to develop his own writing for the theatre and included the elements demanded by the popular taste, and so became a Jacobean playwright. Iago in Othello, for example, is a typical Jacobean character, with his high intelligence, his manipulative way of dealing with people, his plotting and his cruelty, amounting to physical violence when necessary.

What do you think about these Shakespeare myths? Any we’ve missed out? Let us know in the comments below.