Why Did Shakespeare Set So Many Of His Plays Abroad?

You are here: Home1 / Welcome To The No Sweat Shakespeare Blog!2 / Historic Shakespeare3 / Why Did Shakespeare Set So Many Of His Plays Abroad?

We recently mapped the locations of all 37 of Shakespeare’s plays. The most interesting thing about looking at the map is just how broadly Shakespeare cast his creative web across different cultures and languages in the search for suitable material for his dramas.

In fact over three-quarters of Shakespeare’s plays are set outside of the UK, with a geographic spread north to south from Denmark to Lybia and west to east from Spain to Syria. Some of those are set in Shakespeare’s own time, some in Medieval Europe and some in ancient Europe. The Greek and Roman Empires feature in many of the history plays, with action taking place in North Africa (Lybia and Egypt) and what we now refer to as the Middle East (Lebanon, Syria & Turkey).

Of the plays that are set in the UK (England, Wales, and Scotland – none in Ireland) only one is set in Elizabethan England – The Merry Wives of Windsor. Looking at the content of that play may give a clue as to why Shakespeare’s plays are set either abroad or in the distant past. The Merry Wives is pure comedy – farce, actually – and has nothing to say about politics, other than sexual and family politics. It can’t in any way engender any feelings in monarchs or other powerful political figures other than to make them laugh.

Most of the other plays are seriously political. Shakespeare lived in very dangerous times – in times when to criticise powerful rulers could mean imprisonment at the very least and execution at worst. But think about it: how can you write something on a political theme without doing criticising power? The answer is to set your play either in a foreign country or in the distant past. You can then criticise your own monarch, who is disguised as a foreign ruler in the play. The same goes for the plays set in historical Britain – you can give those historical kings some of the villainous ways of your own monarch, thereby pointing to those villainous ways without too much danger.

You still have to be careful though. For example, King James was James VI of Scotland and James I of England at the same time, hence the united kingdoms. Shakespeare made his Scottish king, Macbeth, a tyrant, and a butcher. He balanced that by reference to the English king who is described in terms of holiness and saintliness, and who sponsors the military overthrow of Macbeth. King James, who certainly saw the play, would have been sitting back with a feeling of saintliness himself.

If Shakespeare had set political plays in England in his own time we would never have seen them – nor would the Elizabethan audience, as the plays would have been banned by the censors. But there are a couple of other reasons why so many of Shakespeare plays are set in Europe.

The first is a very simple one: Shakespeare rarely bases plays on stories that he has himself made up – almost all the stories come from somewhere else. He takes them and works his themes on them, changing and developing them in the process, introducing new characters into them, and so on. He almost always leaves the stories in the settings in which he finds them. Some of the stories are very famous, such as the very old story of Hamlet, Prince of Denmark, which there was no way he could have set anywhere other than Denmark. The same goes for Julius Caesar, Antony and Cleopatra, and the other plays set in the ancient world.

The second reason so many of Shakespeare’s plays were based abroad was to do with the strong prejudices and expectations that  Elizabethan audiences had, particularly around Italy. In Shakespeare’s time, if the public saw that a play was set somewhere in Italy and the characters were Italian they immediately sat up and took notice. They knew that the action would be extremely violent and there would be extreme passions that would sweep them up emotionally and hold them in that intense world for a couple of hours. Because of this Shakespeare uses Italy as a backdrop (at least in part) to 14 of his 37 plays.

So although it’s a hotly debated topic just how much travel Shakespeare did – and, indeed whether he ever made it to Italy, or any other countries he based his plays – there are at least 3 good reasons as to why so many of Shakespeare’s plays are set outside of the UK:

1. He couldn’t get away with writing plays that criticized Kings and rulers in his own country and time.

2. Many of the plays Shakespeare wrote came from traditional stories and required a specific setting outside of the UK.

3. In Shakespeare’s time, Italy in particular had a reputation for violence and passion that would pull in the Elizabethan punters. 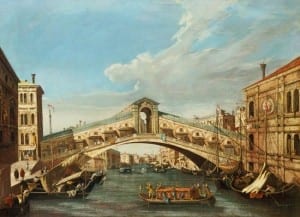 The Rialto Bridge, Venice. Setting for part of Shakespeare’s The Merchant of Venice

Where Did Shakespeare Live In London?