You are here: Home1 / Welcome To The No Sweat Shakespeare Blog!2 / Random Fun Stuff3 / The Shakespeare Tavern

Hold your breath in disbelief as you read this: There is no “Shakespeare Tavern” in Stratford-upon-Avon!

It would seem such a natural thing, wouldn’t it, to have a great number of places in England called “The Shakespeare Tavern?”

Perhaps the answer lies in the meaning of the word “tavern.” A tavern is a place where people go to eat and drink but in earlier times, and during Shakespeare’s lifetime, there were two distinct places where people could do that. You would go to a tavern if you wanted to drink wine – and to eat, of course – or, if you wanted beer or ale with your food. If you wanted somewhere to stay for the night you went to an inn. There were far more inns than taverns as a tavern was a kind of restaurant, where the better-off went, while an inn was where ordinary people went to drink the cheaper ale. And if you were traveling you went to an inn, of course. So the inns were always full. As time went by both inns and taverns became public houses, while some of the inns became hotels. The public houses became known as pubs in England, and that’s how we know them today. Even if they carry the name “tavern” we still refer to them as pubs.

In London, there are no more than three or four pubs called “The Shakespeare Tavern.” There’s one in Victoria, another in Kilburn and one in Westminster. There are none in the area of London associated with Shakespeare, around Southwark and the Southbank. Around the rest of England, too, there are not many, although there is one in Bristol and one in Durham.

There are “Shakespeare Taverns” in Australia – one in Melbourne and one in Sydney; and there’s one in Auckland, New Zealand.

Probably the best known place called “The Shakespeare Tavern” is in Atlanta, Georgia in the United States. It isn’t a pub, however – it’s a theatre. It’s an Elizabethan playhouse, built, like the Globe in London, on the model of an actual Elizabethan theatre. It’s the home of the Atlanta Shakespeare Company and it offers, not only an authentic Elizabethan audience experience but also English pub food and drink before each performance. Its official name is “The New American Shakespeare Tavern.” 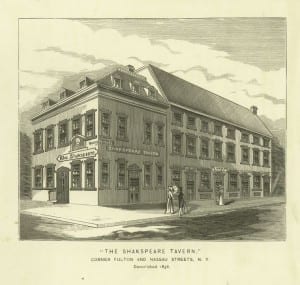 There is one very interesting “Shakespeare Tavern” which, alas, doesn’t exist anywhere but in the history books about New York. It’s Thomas Hodgkinson’s “Shakespeare Tavern,” which opened in 1808 on the corner of Nassau and Fulton streets. What makes it interesting is that it was the hang-out place of the Lads of Kilkenny, a group of young writers, actors and politicians – prosperous, professional young men interested in literature, some of whom wrote as a hobby rather than a career. The enthusiastic young man who emerged as their leader was none other than Washington Irving, author of Rip Van Winkel, who ruled there for many years.

Should You Study Shakespeare for Better English?