Are You Calling Shakespeare A Thief?

You are here: Home1 / Welcome To The No Sweat Shakespeare Blog!2 / Authorship Debate3 / Are You Calling Shakespeare A Thief?

A recent article in the UK’s Guardian was headlined “New evidence suggests Shakespeare may have stolen the plot of Cymbeline.”

Well! Using legal language like “evidence” and “stolen,” its author is suggesting that towards the end of his career Shakespeare committed a crime in writing the Roman play. This is a columnist writing four hundred years after the event. A lot has changed since then.

The scholars who have commented on this new information about the source of Cymbeline naturally take a more scholarly view, being aware that Shakespeare almost never came up with an original plot, and that he was always looking for stories from which he and his fellow writers could make plays. The concept of plagiarism did not exist at that time and every writer was welcome to take stories from any other writer – whole plots and whole sets of characters, even dialogue. The point was not where the story came from, but what the playwright did with it, and how much money it generated for the theatre owners. There was no question of “stealing” anything.

It would be hard to name a play for which Shakespeare himself created the plot. Even Hamlet, so closely associated with Shakespeare, being his most famous, generally regarded his best, play, was lifted from Thomas Kydd, a close friend who he saw every day, and with whom he worked on other plays, and who gave Shakespeare his blessing.

In fact, the idea that Shakespeare sat alone, late at night, writing plays by candlelight, is wrong. He collaborated with other writers, who developed and wrote scenes together. During the day. In the evenings they went to taverns. Sometimes they divided the writing among themselves and sometimes perhaps two would work on one scene and two others on another scene. Typically, one of them would emerge as the dominant writer of a particular text and put his name on it. The theatres were in keen competition with each other and there had to be a new play almost every day from a theatre’s writers. London’s play writers were like factory workers, working seven days a week, mainly in the same room, working together.

A play writer had to learn how to make a play and the only way was to work in a team, the new writers learning from the experienced ones. Shakespeare fell in with Lord Strange’s Men early in his career and was lucky enough to be invited to join a group who were working on a play about an English king, Henry VI, with Raphael Holinshed’s Chronicles of England, Scotlande, and Irelande (Holinshed’s Chronicles) open before them. They were struck by the young actor’s talent and he quickly rose to become the project’s dominant writer, and his name is on the text to this day. All of Shakespeare’s subsequent History plays have plots that were lifted from Holinshed.

Not only did the playwrights take plots from wherever they could find a good story for the stage, but sometimes they would lift whole chunks of text from other writers, tweak them to reflect the themes of their own plays, and insert them into their play’s text.

The classic example of that is Enobarbus’ description of Cleopatra, in Antony and Cleopatra:

“The barge she sat in,
Like a burnished throne”

Not only did Shakespeare take the story from the early 16th Century writer, Thomas North’s, translation of Plutarch’s The Lives of the Noble Greeks and Romans, he lifted the lines, and the passage has become one of the most celebrated in all of Shakespeare’s plays.

The Guardian story is basically more about Sir Thomas North than about Shakespeare. North was not only a translator. He also wrote poems and plays. Like all playwrights, he was always looking for stories. Although he never wrote a play about Cymbeline it seems that he was preparing to do so, and writing an outline in the margins of one of the books he owned.

An American Shakespeare scholar, Michael Blanding, discovered a 1533 edition of Robert Fabyan’s Chronicle, a compendium of British and French history from Roman times to Henry VII, that was once owned by North. The margins in the Fabyan book are crammed with notes in North’s handwriting that are linked to the plot and other details that we also find in Shakespeare’s play, set in Roman Britain. It seems that North was reading Fabyan and planning a play about Cymbeline based on the Fabyan story. And he was making his notes in the margins of Fabyan’s book.

Did Shakespeare have access to that copy of Fabyan’s book and “steal” North’s ideas? “Ah,” say some scholars, “it’s the other way round. North was planning to copy Shakespeare’s play.”

But no, because North died about six years before Cymbeline was first performed. So obviously, Shakespeare “stole” North’s outline.

Those who want to brand Shakespeare a thief point to the close correspondence between North’s play outline and the plot of Shakespeare’s Cymbeline. Blanding, who has a book coming out about it, In Shakespeare’s Shadow, said:

“For example, both the marginalia and the play refer to Julius Caesar’s repeated attempts to invade Britain, and display an obsessive focus on the theme of tributes being paid to Rome by British kings. In addition, both focus on Cymbeline’s sons, Guiderius and Arviragus, include a strategy of a character disguising himself to kill an enemy, and incorporate a battle by a ‘wall of turfs’, historically fought in Scotland.”

What a lot of scholarly energy has been thrown into this! Other scholars have jumped in and commented on it, some of them wagging their fingers at the bard. One of them, Dennis McCarthy, has used plagiarism software to go even further and has found more links between North and Shakespeare, even revealing that some of North’s ideas found their way into Hamlet.

What a thief Shakespeare was!

It’s interesting, of course, that new sources for Shakespeare’s plays are being unearthed, but it’s ridiculous to label Shakespeare a plagiarist when what we call plagiarism today was the lifeblood of those wonderful 16th Century English plays that are the glory of our Western culture. And the great “thief” was also the greatest writer England has ever produced! 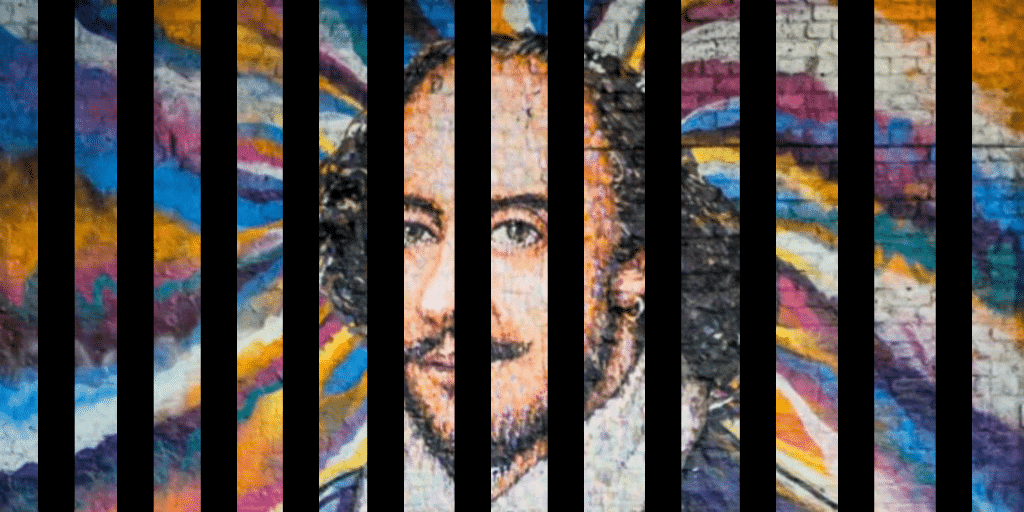 What’s your take on this debate – was Shakespeare a thief or plagiarist? We’d love to hear your thoughts in the comments below!

Much Ado About Nothing Review, The Globe Theatre, May 2022
Scroll to top