You are here: Home1 / Welcome To The No Sweat Shakespeare Blog!2 / Random Fun Stuff3 / Shakespeare The Travelling Marathon Man

It’s quite common for Londoners to attend the theatre in Stratford upon Avon and also, most Americans visiting London make the journey to the Royal Shakespeare Theatre. It’s a hundred and two miles, an easy trip that takes about two hours. You just drive straight up the M40. Or you could go by train, about an hour and a half. It’s a pleasant outing: leave in the morning, park the car, have lunch, attend a matinee then drive home in time for dinner. Or you could go to an evening performance and stay in one of the hostelries.

Imagine that you lived in Stratford, with a house, family and childhood friends, but had to go to London for extended periods because that’s where your job or your business or important associates were. It would eventually become quite tedious, even in a comfortable air-conditioned or heated car. But Shakespeare did that throughout his career. It’s interesting to imagine what it would have been like for him.

In the sixteenth century there were no real roads, only rough muddy tracks. No-one travelled in a vehicle – unlike today’s family travel modes. If you were rich you rode a horse, if you weren’t you walked. There were wagons carrying cargo and perhaps you could hitch a ride with one of them. But it would be very uncomfortable and much slower than walking. The elderly rich sometimes travelled in a carriage slung between two horses trained to walk at the same pace. It was only after Shakespeare’s death that the government did something about the state of the roads, allowing for the development of vehicle travel. 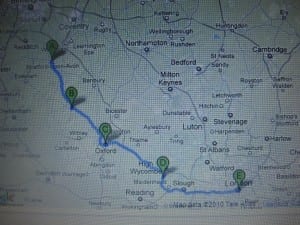 When Shakespeare was twenty-one, already married with children, he went off to London to find a job as an actor. There was a huge demand for new plays and, as we know, his talent emerged and a star was soon born. The first thing he would have had to do was get a licence to travel away from the town he lived in. That was a government health measure, to minimise the effects of the plague. He would have walked to London. This is thought to be the route he would have taken.

Historians and scholars think that, leaving early every morning from wherever he slept at night, walking briskly across fields and if they were not too muddy, roads, it would have taken him six days. If you and I undertook a journey like that we wouldn’t want to do it again in a hurry (and would want to revise some inspirational journey quotes before we did!). It would be a huge achievement and it would make us famous among our friends. But Shakespeare did it frequently – there and back.

Shakespeare’s career was meteoric. He worked very hard, as actor, writer and theatre manager and soon started to become prosperous. We can assume that he would have bought or rented horses as soon as he was able to afford it. Even so, it would have been far more tedious and laborious than travel today. If you go along that route now you will see many of the inns that he would have passed, probably staying in at least three of them on each journey. Shakespeare’s friend, John Davenant, owned the Crown Inn in Oxford, and Shakespeare would probably have visited him on each trip: Davenant was more than a friend: Shakespeare was his son William’s godfather.

When Shakespeare retired he settled into his house in Stratford and didn’t visit London again. It must have been quite a relief, or perhaps, if he loved the noisy, busy life of London and the travelling, quite disorientating. As a busy man, working so hard in London and organising such things as buying property and attending to family business when he was in Stratford, perhaps, the long walks and horse rides gave him the chance to think. As a serious writer he would always have had his next play or set of sonnets on his mind and perhaps it was on those long journeys that he worked out his plots, ideas and characters in his head, perhaps even composing entire sonnets, in the peace and quiet of the English countryside.