If you ask people how classical Shakespearean acting is supposed to sound, they’ll probably tell you something like “posh” or “elevated,” or even worse, “esoteric” or “elitist.” You may have heard the Laurence Olivier style of speaking Shakespeare, as fancy as the Queen, and full of weight and reverence. That’s a perfectly good way of speaking Shakespeare and has a lot of merit – but it’s not the only way, and it certainly wasn’t the way Shakespeare’s plays sounded when he was alive.

You may well be thinking – huh, what does that even mean? Or, why should I care? Well, if you have even a passing interest in Shakespeare, language, theatre, or history, it means a whole lot. Basically, the “Queen’s English” that we know today (also known as “received pronunciation” or “RP”) is a comparatively modern invention. In Shakespeare’s day, the English accent sounded something more like a funky combo of Irish, Scottish, and Southern American accents. Basically, if you do a pretty good impression of Captain Barbossa from Pirates of the Caribbean, you’re well on your way. 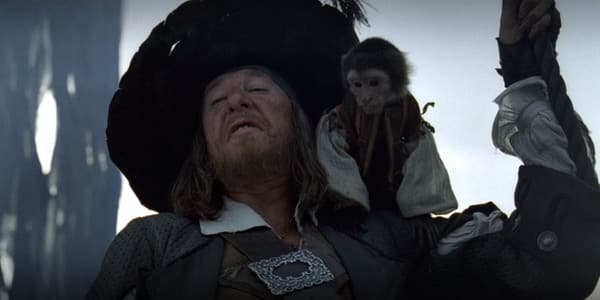 Geoffrey Rush as Captain Barbossa in the Pirates of the Caribbean franchise — or, if you listen to him, maybe Shakespeare?

What exactly is original pronunciation?

So, the main scholars behind the latest discoveries about original pronunciation are a father-son pair: linguist David Crystal and actor/author Ben Crystal. On their original pronunciation website, they note, “It’s important to appreciate that there is no ‘single’ OP.” They go a bit further in an interview with the Folger Shakespeare Library’s podcast, “Shakespeare Unlimited.” David Crystal explains: “Original pronunciation is a reconstruction of the sound system of Elizabethan English. (…) Technically, it’s called a ‘phonology.’ You and I are using the same sound system of modern English, but we’re speaking in slightly different accents.”

But if it’s not exactly an accent, what is it? Well, Crystal says, think of the word “invention.” No matter what accent, if you’re speaking the English word “invention” today it’s going to be three syllables — “in-ven-shun.” But, in Shakespeare’s day, it was four syllables — “in-ven-shee-un.” So, original pronunciation goes even further than being an accent; it’s an early modern way of speaking, rather than a modern one. In the podcast, Crystal clarifies: “In Shakespeare’s time, the phonological system (…) was fundamentally different from the way we present them today, even though there might have been many variations of regional accent at the time.” So, there were different accents within OP, even though we mostly explore the one that we can eke out of Shakespeare’s texts.

Here’s a fun video from Shakespeare’s Birthplace Trust that illustrates the difference between original pronunciation and received pronunciation:

How do we know what original pronunciation sounds like?

In a talk at the University of Otago in New Zealand, Ben Crystal explains that there are three main ways that scholars have been able to figure out what OP would have sounded like:

If you’ve ever looked at a copy of Shakespeare’s First Folio, you’ll know that the spelling is…far from perfect. That’s because in the early 17th century there was no standardized spelling yet. People spelled things out in the way they pronounced them — which sounds a lot more convenient, honestly. In any case, it helps with tracing how words were pronounced. The word “film,” for example, is spelled “philome” in the First Folio, indicating that it might have been pronounced with two syllables instead of one.

When you’re reading Shakespeare, John Donne, or any of those other Elizabethan English poets, you might notice that some of the rhymes just don’t sound work. I mean, in Sonnet 116, Shakespeare rhymes “proved” with “loved,” which is just a weird and clunky ending to an otherwise romantic love poem. But David and Ben Crystal argue that the rhyme actually did work. When it was written, “proved” would have been pronounced “pruhved.” In fact, they have found that over two-thirds of the sonnets have rhymes that don’t work in modern English but do work in OP. Here’s a video of Ben Crystal reading Sonnet 116 in RP and then again in OP:

Even though spelling wasn’t standardized, early modern authors published occasional pronunciation guides for spoken English. One of those guides was

written by Shakespeare’s theatrical compatriot, Ben Jonson. His book, The

English Grammar, was written in 1623, then published posthumously. In the book, he explains, for example, that the letter “r” was pronounced at the end of a word — he calls it “the Dogs Letter,” because of how dogs bear their teeth — which stands in contrast to most British accents today. You can learn a bit more about Jonson’s book here.

So why is understanding Shakespeare’s pronunciation important?

This research affects a couple of groups of people: those who produce Shakespeare’s plays and those who experience them.

In 2016, Daniel Spector, director of the Classical Studio at New York University’s Tisch School of the Arts, co-directed a production of Hamlet in OP with his small conservatory group of undergraduate students. I spoke with him about his experience training actors using original pronunciation. His main takeaway comes back to the idea of Shakespeare being perceived as elitist.

“OP sounds like real people,” Spector says. “Students and audiences come to Shakespeare with an incredible amount of cultural baggage, and, of course, we associate Shakespeare in its perfect, or purest, form as being spoken in RP, which is not the way most people speak — it’s posh, it’s associated with the upper class, and therefore it just reinforces the notion that Shakespeare is elitist. The way [OP] sounds is resolutely non-upper class.” 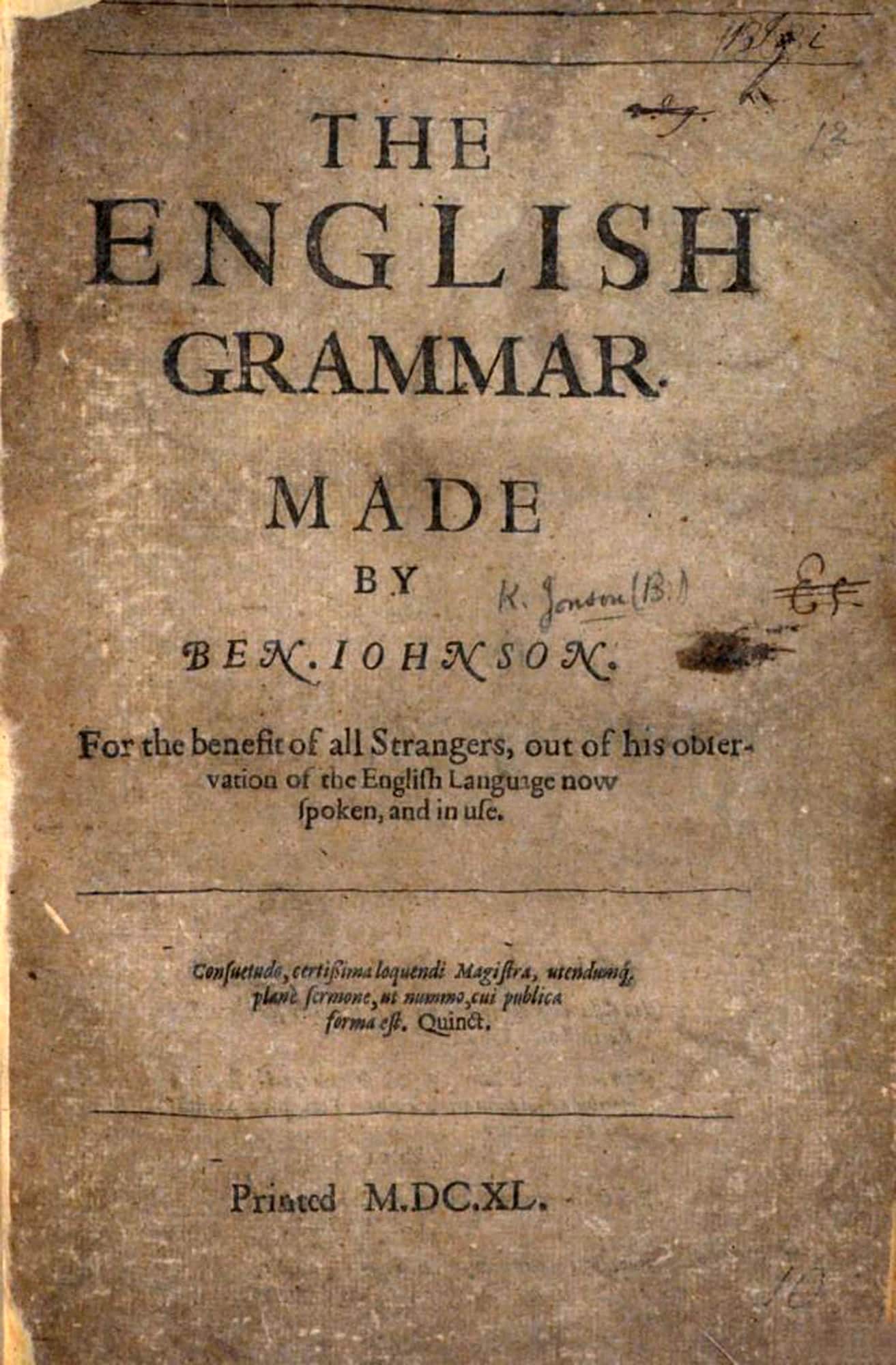 The cover of Ben Jonson’s The English Grammar, written in 1623 and published in 1640. Photo: The British Library

For an actor, he says, “It just has a way of bringing these plays back where they belong, which is down to earth, and there was something wonderful about hearing Hamlet, of all people, sound like a guy down the street.” Once that veil of formality and reverence was lifted, Spector says it made his actors more able to do their most important job: relating to the other people on stage as real people. He explains, “These plays are just about people relating to each other and talking to each other — not what RP often sounds like, which is people talking at one another.”

The change in dialect helps on a technical level, too. Spector explains that one of the main struggles of speaking in verse is allowing the words to flow. Shakespeare’s iambic pentameter can be a useful tool for actors, but if used incorrectly it can sound robotic — “dee-DUM, dee-DUM, dee-DUM, dee-DUM, dee-DUM” over and over again for a few hours isn’t super entertaining. But, says Spector, “It’s really hard to sound robotic in OP (…) a lot of vowels get clipped; OP tends to move faster, so it helps smooth the verse out a bit.” This smoothness is opposed to the weight of received pronunciation (the “Queen’s English”), which focuses on rounding out vowels and fully articulating every word — which makes for beautiful, but not always conversational, speech.

The Crystals echo this claim while talking to the Folger’s podcast about the 2004 production of Romeo and Juliet performed at Shakespeare’s Globe in original pronunciation. The production, when performed in OP, was 10 minutes shorter than when it was performed in a contemporary dialect. Because the words run together and bounce along more easily, the preciousness is lost and the true meaning of the words comes alive instead. Learning original pronunciation can be a helpful tool for actors, even when they go back to using their modern dialects. Ari Pollack was a student of Spector’s in the OP production of Hamlet at the Classical Studio and is now a company manager at the American Shakespeare Center. He explains: “I found that it made the poetry of the text feel more natural, and I’ve been able to bring that ease with verse back into my natural dialect.” 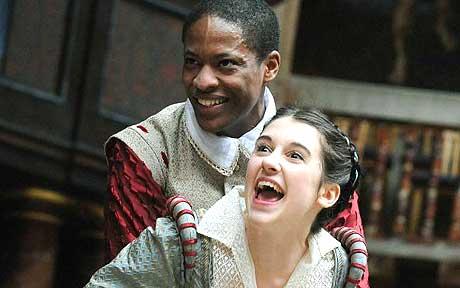 Adetomiwa Edun and Ellie Kendrick in the original pronunciation production of Romeo and Juliet at Shakespeare’s Globe in London, 2004. Photo: Alastair Muir

In his University of Otago talk, Ben Crystal echoes Spector’s sentiments about the powerful effect of OP’s informal sound. He explains that when young people came to see The Globe’s production of Romeo and Juliet in OP, they were excited to hear actors that “sound like us.” Says Crystal, “Of course it doesn’t sound like them, but it doesn’t sound like Them. The elite” (capital “T” indicated physically).

This point about OP “sounding like us” ties in well with the main reason many people say Shakespeare’s plays have endured: their “universality.” But that universality sometimes seems to resonate better in Shakespeare’s stories and themes rather than in performance. If you tell a teenager, “This play is about a guy and a girl who fall in love but then they can’t be together because their parents are super controlling and hate each other,” they’ll be like, “Oh, yeah, okay, I get that.” But when you put it up onstage with actors speaking in regal, carefully pronounced language, they might forget that they can see themselves in the characters.

Bringing original pronunciation into modern-day performance can be a useful tool for engaging more potential young writers, actors, readers, and scholars. Original pronunciation allows us to feel connected to 400-year-old words and makes history something immediate. Most importantly, it helps convince us that if Shakespeare sounded something like us, maybe our voices can shape generations to come, too.