What could be better than a walk about London’s West End on a warm July evening, seeing people who have spent the past year locked down at home joyfully filling places like Leicester Square, with its impromptu street entertainers and its large choice of bars and restaurants, all fully open?

And right across the West End the theatres’ lights are on! At last.

For those thinking about doing the round of Shakespeare plays, why not a Shakespeare performance that doesn’t take itself as seriously as the others do?

You will find that at the Leicester Square Theatre where the Magnificent Bastards, are performing their Shit-faced Shakespeare production of Macbeth, June to September 2021. 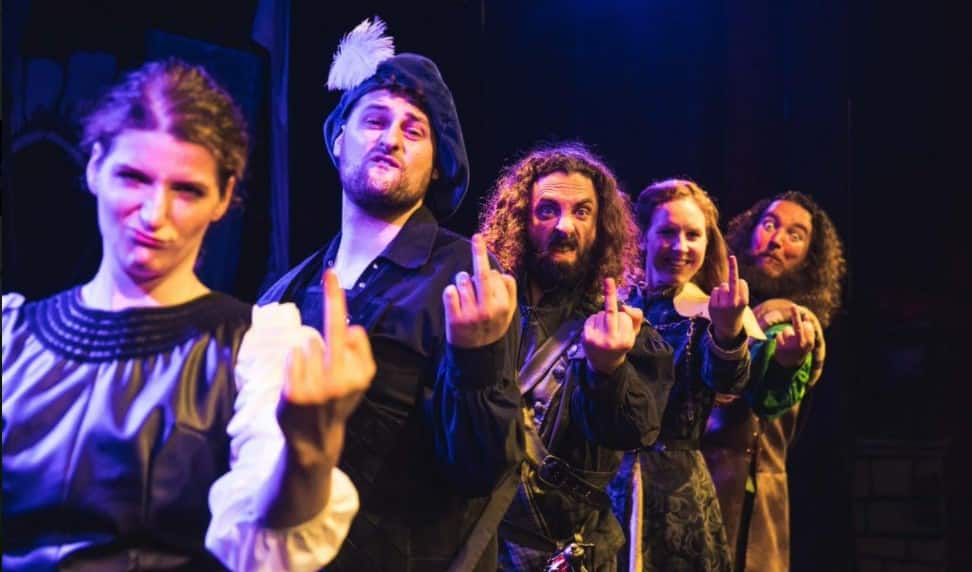 This is a company of six professionally trained actors who have come up with an idea so unique, and also questionable to the Shakespeare ‘establishment,’ that they do not have to fear the possibility of rivals, as Shakespeare’s King’s Men had to. And while on that point, their gimmick probably comes fairly close to what a performance by Shakespeare’s King’s Men was actually like.

The idea is that the six prepare a straight performance of the highlights of a Shakespeare play and a few hours before curtain-up one of them drinks solidly until he or she is drunk. That actor’s function is to perform the role in any way they like, even appearing in scenes where the character is not supposed to be and disrupting, even from the wings. And because an actor will play several roles, the scope for disruption is wide.

The cast manages to get through the severely cut-down play and sometimes one of them is left alone to recite a soliloquy unmolested, although there may be one or two comments shouted to them from backstage. In those performances, John Mitton and Stacey Norris reveal themselves as two actors who would perform the roles of Macbeth and Lady Macbeth very convincingly in a straight version of the play.

Applying the idea of a drunken actor with a licence to disrupt the storytelling to a Shakespeare play is brilliant because, particularly in the case of Macbeth, the audiences are likely to know the story. Although Shakespeare’s storytelling is minimal here it is recognisable, but there is no chance of the audience’s emotions being touched. A deeply thoughtful and tragic story becomes comical with almost non-stop audience laughter all the way through. And most funny if you know the play well.

The audience involvement is not a response to the tragedy of Macbeth but to the antics of the actors. And the audience has another role too. Some are asked to object with the use of a hooter or a drum, to the drunken actor not being drunk enough, in which case the actor is handed another can of beer. A member of the audience is given a toy crossbow and asked to participate in the massacre of Macduff’s family by shooting one of his children, played by a dumpy manikin, dressed in exaggerated Scottish garb, on a remote controlled cart that darts erratically about the stage. It’s a pity that the opportunities for audience participation are limited by the current pandemic. More of that would have been terrific.

James Murfitt, the shit-faced actor on the opening night, played several roles. We first see him as one of the witches. The two sober actors have mics that create weird echoes of their chants. They do a choreographed ‘witch’ movement around the stage. Murfitt wanders off by himself and makes comments that have nothing to do with the scene. Later, when we see them again, he joins them but leads them in chanting ‘Macbeth is a wanker, Macbeth is a wanker.’ Low humour, yes but very funny, when you know the play.

In that sense this is a satire. It’s not a satire of the play but of our modern attitude to performing a Shakespeare play. As you sit watching and laughing you may be thinking of the absurdity of those who take themselves too seriously when performing Shakespeare. Moreover, audiences who take a Shakespeare text too seriously are in the firing line. Purists would regard this production as outrageous as the actors, trying to cope with the drunk, twist the text and depart from it completely most of the time, even to calling the other actors by their names. That, too, is something that an Elizabethan audience might have experienced. Shakespeare was not worshiped as we worship him today, as being almost divine. He was seen as an actor and a working playmaker and, popular as they were, his plays were just plays among the hundreds performed every year in London. Our established theatres, particularly those specialising in Shakespeare, are temples to which we go to worship him. Shakespeare would be astonished if he could see that. To the Elizabethans a theatre was a place where they expected to relax and enjoy themselves, talk to each other, call out comments to the actors, and even throw things at them. It was essentially a place of entertainment and the company that provided that best made the most money. When we watch a Shakespeare play in mainstream theatres today we display the same level of respect as we do in a church service. The Magnificent Bastards capture something of the original attitude to a theatre performance in those ways.

Elizabethan players were seldom sober, off or on stage. They probably managed to get through performances in the way that drunken actors would today, slurring and forgetting their words and missing their cues etc. but probably not completely disrupting performances. However, the other players would have had to cope with those missed cues, wrong lines, and so on. An Elizabethan player had to be good at improvisation, and some of the Shakespeare texts we have today have some content that started out as actor improvisations, so this performance is an exaggerated version of that.

We next see Murfitt as Malcolm. He destroys the scene where Macbeth and Banquo return from battle and are rewarded by a larger-than-life, Brian Blessed-like Duncan, played by Will Seaward. At the end of the scene Malcolm says “Please don’t kill my Dad.” From there on he appears in every scene and diverts it. The story is told, though, and that’s where Shakespeare comes into it. His plot is a framework that the actors claw their way back to from time to time and that drives the story on until the next disruption.

The company and their Shakespeare performances are quite famous and everything written about them is an assurance that the shit-faced actor does, indeed, spend a few hours drinking before the performance and does get drunk, and that the beer and wine he or she drinks onstage is real, but the show comes across as somewhat rehearsed, and the only flaw is that it crosses the mind too frequently that the chaos caused by drunkenness – for it is chaos, funny chaos – is too good to be entirely spontaneous.

However, this is something you must see, particularly if you are a Shakespeare enthusiast, but even if you aren’t it’s great fun.

Shakespeare Was The Great English Writer… Was He Also The Greatest Pl...

How To Write An Elizabethan Play
Scroll to top