You are here: Home1 / Welcome To The No Sweat Shakespeare Blog!2 / Historic Shakespeare3 / Shakespeare References To Sports & Games

When we talk to each other we make linguistic shortcuts by using metaphors, which we get from the large range of the activities that we share. One of those is sport. We may tell our friend how happy we are to touch base with her. That, of course, comes from baseball, where the players need to touch the base to make a legal run. We may say about a recently departed octogenarian relative’s death that he had a good innings, meaning a reasonable number of years of life. We talk about our goals in life, about tackling a problem, or being caught out.

Most of the sport metaphors we use go far back, and while chatting to friends, family, and colleagues Shakespeare would have used them too. That is not a guess, because the texts of his plays are full of them, demonstrating how much a part of Elizabethan chit-chat they were.

Although it was a martial skill, archery was also a sport, just like shooting with guns is today. Although we don’t know much about the youthful pursuits or the preferences Shakespeare had regarding leisure activities, it’s clear that he was very familiar with archery.

…which refers to a miss where the arrow ends up a good deal to the left of the bull’s eye.

And King Lear, smitten to the heart with grief, groans:

…meaning that he’s been hit right in the centre of his heart. The nail or the pin fastening the target to the butt at the center of the target was known as the “clout.” That’s what you aimed for. It was also known as the “mark” or the “pin.”

“shot through the ear with a love-song; the very pin of his heart cleft with the blind bow-boy’s butt-shaft.”

The technical term for discharging an arrow was “let loose.” The archer would tighten the bow-string by pulling it far back then discharge the arrow by letting go. In that way he would let the string slip and the arrow would be discharged.

Something the young Shakespeare would very often have encountered in the countryside around Stratford was gentlemen enjoying one of their favourite sports – falconry.  Some of Shakespeare’s plays could almost read as a guide to falconry, so frequently are falconry images used. 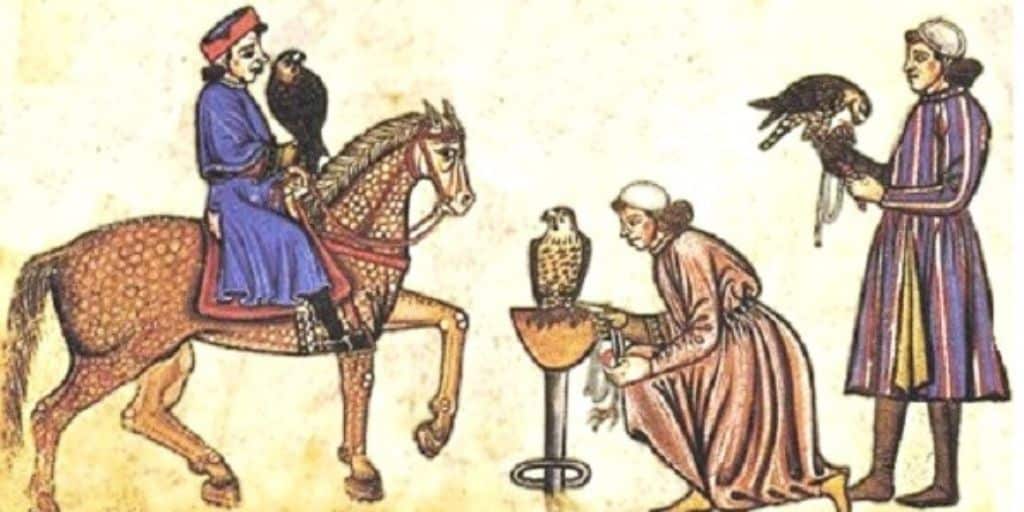 Shakespeare often compares a fickle or wayward woman to a haggard hawk (Othello III,3), (Much Ado about Nothing III:1) and several more.

He goes further in The Taming of the Shrew where Petruccio demonstrates how to tame a shrewish bride with the same methods used for training a falcon – denying it food, sleep, comfort etc. until it falls into line.

“Haggard” is the falconer’s term for a bird whose training began too late, leaving her inclined to take off on her own, and then ignore her master’s whistle instructing her to return. The female hawk is used for hunting because she is bigger, stronger, and faster than the male, and so the haggard hawk is the perfect image for a rebellious woman.

There are two references to football in Shakespeare. It was a popular game, played with a leather ball by the better off, but village boys would get a pig’s bladder and kick it around.

“Am I so round with you as you with me,
That like a football you do spurn me thus?
………
If I last in this service, you must case me in leather.”

“a base football player.”

Games, particularly, remembered from his childhood, and played with his own children, suffuse his texts.

For some reason, which we will never know, Love’s Labours Lost is brim-full of sport and games references. In IV,3  Biron says

referring to a child’s game, which could be one of the very old hide and seek, or Hodman-blind, which we know as blind-man’s-buff.

There is also a reference to “Tables,” otherwise known as “Backgammon”:

“This is the ape of form, monsieur the nice/ That, when he plays at tables, chides the dice.” (V:2)

In Antony and Cleopatra the lovers play billiards. In II,5 Antony says:

To play fast and loose with something is a phrase we use a great deal today. That is a reference to another Elizabethan game played at fairs. It was a cheating game in which punters paid a gypsy a farthing to try and skewer a piece of leather to a table and win a prize, but inside the folded leather was a plank. So when the punter drove the skewer into the leather they thought they had it skewered but then the gypsy would slide it away and pocket the money.

“Like a right gypsy, hath, at fast and loose/Beguiled me to the very heart of loss.

Barley-break was a catching game, Two Noble Kinsman. Base was a running game, Cymbeline. Bone-ace was a card game, The Taming of the Shrew. Bo peep was a game played with babies – peeping round a curtain and saying “Bo peep,” King Lear.

Card game images are everywhere, as are chess references, particularly as ways of describing the various movements in a battle. Some physical games were leap-frog and fencing. Fencing is featured prominently in the texts, as are horse racing images.

Our leisure activities today are many and varied, and there’s something for everyone. So were there for the Elizabethans. Children and teenagers spend a great deal of their time playing games of a virtual nature, sitting alone at a computer, but some of us can remember the days before we did not have personal computers and children played outdoors with their friends.

That’s what Elizabethan children, including the young William Shakespeare, did, and all that knowledge and experience was one of the many things in his life that provided Shakespeare with the raw material of his poetry.