Is ‘The Gods Are Bastards’ A Shakespeare Phrase?

You are here: Home1 / Welcome To The No Sweat Shakespeare Blog!2 / Random Fun Stuff3 / Is ‘The Gods Are Bastards’ A Shakespeare Phrase?

‘The Gods Are Bastards’ is not a phrase that appears either in Shakespeare’s plays or his poems: it is the title of a popular web serial novel  by D.D. Webb – a serial that could go on forever if Mr Webb wishes to keep writing it, or passes it on to another writer. Webb has described it as “a high fantasy western.” The multiple plots involve demons, religion, politics and an increasingly large cast of characters and interests all vying with each other over the fate of an empire.

However, Shakespeare does connect the two words ‘gods’ and ‘bastards’ in one sentence in King Lear.

The Duke of Gloucester, one of the main protagonists of the play, has two sons, Edmund and Edgar. Edgar is legitimate in that he is the son of Gloucester’s wife, whereas Edmund, the son of a woman Gloucester much enjoyed outside of marriage, is of course, illegitimate. Edmund grows up used to being referred to as a bastard. It means that, even though he is older than his brother, Edgar is the heir to Gloucester’s title and lands.

Gloucester boasts that he loves them equally, although he tells everyone that he’d had a lot more fun in the conception of Edmund. Edmund is offended by the constant focus on his legal status as an illegitimate son. He takes a humanist view and questions why, when he is just as strong and handsome, educated, intelligent and talented as his brother, he should be excluded from all the benefits that their father can bestow. Not too far into the play, revealing to the audience a plot he is hatching against his brother, Edmund presents his claim to equality and ends up by exclaiming, “Now, gods, stand up for bastards!”

“Thou, nature, art my goddess. To thy law
My services are bound. Wherefore should I
Stand in the plague of custom and permit
The curiosity of nations to deprive me
For that I am some twelve or fourteen moonshines
Lag of a brother? Why “bastard”? Wherefore “base”?
When my dimensions are as well compact,
My mind as generous, and my shape as true
As honest madam’s issue? Why brand they us
With “base,” with “baseness,” “bastardy,” “base,” “base”—
Who in the lusty stealth of nature take
More composition and fierce quality
Than doth within a dull, stale, tirèd bed
Go to th’ creating a whole tribe of fops
Got ’tween a sleep and wake? Well then,
Legitimate Edgar, I must have your land.
Our father’s love is to the bastard Edmund
As to the legitimate.—Fine word, “legitimate”!—
Well, my legitimate, if this letter speed
And my invention thrive, Edmund the base
Shall top th’ legitimate. I grow, I prosper.
Now, gods, stand up for bastards!” 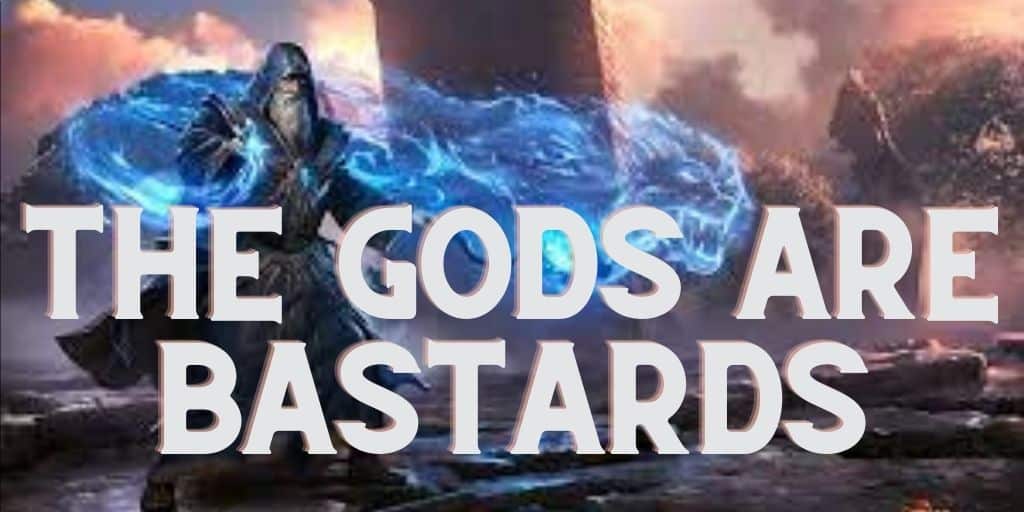 The Gods are bastards – wizards an all!

These days we use the word ‘bastard’ frequently and in more than one way. Women, not having any counter to the words men use to demean them, like ‘cow’, ‘bitch’, ‘whore’, and many more, will generally refer to a man they wish to demean with the single word ‘bastard.’ They may also use it in the general sense, as ‘men are bastards.’ “Bastard” is also used in an affectionate, compassionate way: ‘the poor bastard was mugged last night,” And also in a general sense to apply to an unpleasant person; “Some bastard stole my wallet.” The original meaning – the child of parents not married to each other – has gone out of use in western countries as the legitimacy or illegitimacy of human beings has ceased to be a legal or social issue.

Shakespeare introduces four characters as bastards in his plays:

When the audience saw someone proclaimed as a bastard they naturally took him as a negative character. Edmund subverts that expectation in that he comes across as a man whose cause has to be taken seriously. He is definitely a villain but he is a very attractive human being and has a strong point to make. That is particularly striking to modern audiences, but Elizabethan audiences would have responded to his character and his logical behaviour throughout.

Don John in Much Ado About Nothing is different. He is the illegitimate brother of the Duke, Don Pedro. He seems permanently depressed, condemned to his role as a villain. He thinks he has to be a villain because he is a bastard. He refers to himself as ‘a plain-dealing villain’ and looks for villainous things to do. He does not do those villainous things for profit. That he’s a bastard is his only reason for being a villain, which makes him a good character in a comic play as he creates the kind of confusion and misunderstandings that comedy thrives on.

Philip Faulconbridge is the colourful son of King Richard I. He is not a villain and, in fact, he distinguishes himself and is later knighted as Sir Richard Plantagenet.

Shakespeare Was The Great English Writer… Was He Also The Greatest Pl...
Scroll to top