Thee and Thou – What Does It All Mean?

You are here: Home1 / Welcome To The No Sweat Shakespeare Blog!2 / Historic Shakespeare3 / Thee and Thou – What Does It All Mean? 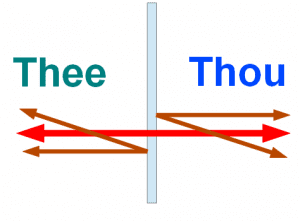 Here’s a prose passage from Shakespeare’s Julius Caesar, where Brutus addresses the Romans after the conspirators have killed Caesar:  “As Caesar loved me, I weep for him; as he was fortunate I rejoice at it; as he was valiant, I honour him; but as he was ambitious I slew him. There is tears for his love; joy for his fortune; honour for his valour; and death for his ambition.”

Although Shakespeare technically wrote in Early Modern English there’s nothing in that passage that’s not written in a language all modern English speakers would recognise. It’s Modern English as we know it, and immediately accessible to all of us…so what is all this about thees and thous?

By the fifteenth century the use of thee/thou  and you/your was a firmly established index of social status. That is something of an oversimplified statement, though, because the words were also used to express relationships among family and neighbor groups. If you were a person of low social rank, in talking to someone of high rank you would address him/her with the words you and your, whereas he/she would use thee/thou in talking to you. Within the family the parent may address the child as thou, and if the parent assents to it the child may address him/her likewise, so it becomes an expression of affection. Lovers will address each other as thou. It’s similar to the French use of tu instead of the more formal vous.

By the middle of the sixteenth century – when Shakespeare was writing – this system of thee/thou & you/your was breaking down. There’s little trace of it in English today, and although some English dialects in both America and England still use the thee and the thou  it’s fading fast as communications change and mass media drives ever faster language development.

Students who object to Shakespeare’s use of thee and thou before they have encountered a Shakespeare text will eventually get more out of the play when they understand the use of those words. They will come to see that Shakespeare is using them creatively.

Shakespeare’s plays are filled with the interplay of you and thou, with characters expressing mistrust and suspicion, formality, affection, love, a business-like relationship, insults and so on, sometimes those words dancing around each other in a single conversation.

For the most part in Shakespeare’s plays, those of high status will address those they consider to be beneath them as thou, and those of lower status will address their superiors as you. But the use of those words is also an opportunity to create undercurrents and subtleties in the relationships between characters. A character can express his or her sense of importance by addressing someone of the same rank with ‘thee’, for example, thereby sending a message about that relationship. Not only that, but a rebellious subject, for example, may address his king with thee. That would be an insult of monumental proportions. Two people of equal rank, talking to each other, would use the polite form of ‘you’ but if one started becoming too familiar the other might put him down with the use of ‘thou’.

Some examples of how Shakespeare plays with thee and thou:

So that’s the guide to thee and thou meanings. Make sense? Join in by leaving a comment below.