You are here: Home1 / Welcome To The No Sweat Shakespeare Blog!2 / Shakespeare's Works3 / Top 10 Most Tragic Shakespeare Moments

Tragic Shakespeare plays are famous for the sheer volume of death and heartbreak. Trying to catalogue all of the saddest moments in his plays would take forever! But which are the saddest? Here’s our top 10 list – let’s see if you agree!

10) Proteus’ betrayal of Julia, The Two Gentlemen of Verona

So false that he grieves my very heartstrings
(IV.II.56)

When we think of the most tragic Shakespeare moments, we usually think of the many, many deaths in the plays. But how about the death of the heart? In The Two Gentlemen of Verona, the whole first couple acts set up a relationship between Proteus and Julia. When he has to leave, they both promise to be faithful.

She misses him so much that she decides to disguise herself and run away to go see him. But what does she find when she gets there? He’s spent the whole trip trying to get with his best friend’s girlfriend, Silvia. YEAH. Proteus is that kind of guy.

And Silvia won’t even return his advances! Because she’s a good person, unlike some people! Silvia repeatedly reminds Proteus that he already has a girlfriend, and Proteus claims that Julia DIED. Died! That can’t feel good. And even more tragic? Julia ends up with him in the end anyway. Yep. 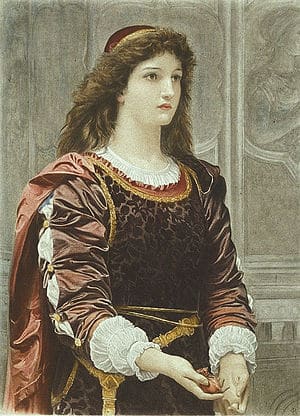 A portrait of Silvia by Charles Edward Perugini (1888)

Constance is surrounded by grief. She is an older widow, with only her young son Arthur left in the world. She’s definitely a bit of a helicopter mom — she is convinced that Arthur should be king, and enlists the help of foreign royalty and military might to get him the crown. Unfortunately, Arthur is captured and killed, and Constance’s entire world falls apart.

She becomes tormented by grief. When others accuse her of being crazy, though, she makes an eloquent point. Grief, she argues, is something that one can only feel if they know their state and their suffering — it would be more insane of her to not act as erratically as she is. It’s always painful to watch a parent lose their child in Shakespeare, but Constance’s erratic eloquence is all the more heartbreaking.

Nowhere else in Shakespeare is there a show of violence quite as horrifying as the assault and maiming of Lavinia. She and her husband Bassanius spot the super sadistic couple, Tamora and her lover Aaron, engaged in some serious PDA. Lavinia mocks them about it (with some incredibly racist lines, to be fair enough to Aaron’s reaction), and then Tamora’s sons kill Bassanius to defend their mother’s honor.

They are about to kill Lavinia when Aaron and Tamora convince them to sexually assault her instead. They do, and then cut off her hands and tongue so that she can’t tell anyone who assaulted her. As a result, Lavinia’s already typically silent role as a woman in this society becomes physically realized. Yeah, this play is seriously messed up.

Sir, spare your threats:
The bug which you would fright me with I seek.
To me can life be no commodity
(III.II.96-98)

Jealousy is going to be a theme throughout the next couple tragic moments. Specifically, jealous men and the women who did literally nothing wrong. In the case of Leontes and Hermione in The Winter’s Tale, she was being polite to his best friend and he lost his mind about it.

At the beginning of the play, Hermione and Leontes are married, and she’s pregnant with his second child. Leontes’ best friend, Polixines, is staying with them, and Leontes is trying to convince him to stay for another month (people sure did hang out for long periods of time back then). Polixines doesn’t agree until Hermione asks him — which, for some reason, sends Leontes into a jealous rage.

Hermione, of course, was totally faithful. Nevertheless, Leontes throws the very pregnant Hermione into jail and plans to hold a trial for her infidelity. Just beforehand, Hermione gives birth to a baby girl — but Leontes has her torn away from the baby and brought to trial anyway.

When he threatens Hermione with death, she says she welcomes it because she has lost his love. Ouch. Poor Hermione. His lack of trust and threats of murder are tragic enough, but the way that Hermione welcomes death is even more upsetting.

One of the most well-known tragic Shakespeare moments, Desdemona’s death is another brought on by jealousy. We all know the story: Iago convinces Othello that Desdemona is cheating on him, Othello gets really upset, and he murders her before finding out that she was innocent.

But what’s often forgotten is how Desdemona’s strength fades throughout the course of the play. She starts the play by standing up to her father, who doesn’t want her to be with Othello, and marrying Othello anyway.

But she is so in love with Othello that even when he screams at her, when he threatens her, when she clearly knows that something is wrong and he plans to kill her — she never fights back. Not only is she faithful to Othello, but she is so much so that she refuses to fight for her own safety, and dies still in love with her murderer. Pretty sad stuff. 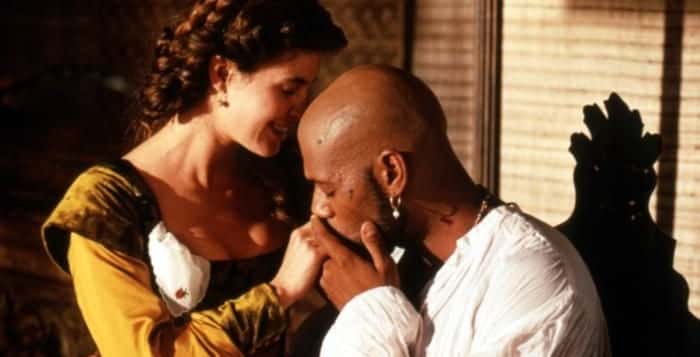 Like Constance from King John, Queen Elizabeth is another mother whose tragic moment is her grief. In one of his most famous moments, Richard III murders two young princes in the Tower of London. But we’ll get to that in a bit.

For now, let’s talk about how their mom, Queen Elizabeth, deals with the situation afterward. She is grief-stricken, obviously, and begs Margaret to tell her how to curse Richard. But when she finally sees him, she just… tells it like it is. In the saddest way possible, she points out that she has no more sons left for him to kill. But he has one more demand: that he marry her daughter.

Though she initially says that will never happen, Richard is so conniving and manipulative that, somehow, Queen Elizabeth relents and agrees to the match. In doing so, she loses every single one of her children to Richard’s schemes.

This isn’t a tragic Shakespeare death like some of the others — but this moment is utterly heart-shattering. Though Falstaff may be lazy, cowardly, and even buffoonish, he has always been a loyal friend to Prince Hal. In a royal world where it’s hard to find true friends, Hal found one in Falstaff.

That’s why it’s so painful when Hal ascends to the throne as King Henry V and banishes him. Falstaff thinks that he will be one of Hal’s close friends and maybe even advisors, but then he is publicly humiliated when Hal banishes him in front of the entire city.

Falstaff doesn’t know how to respond, and thinks it must be a mistake, or an act — but as he starts to realize the truth, the typically boisterous knight becomes silent. By the play Henry V, we learn that Falstaff died from a broken heart. If you needed any proof that they had a true friendship, that’s it right there.

Okay, yeah, so this moment had to be on here. But for one of the most famous tragic Shakespeare moments, the saddest part is how much it almost wasn’t a tragedy. They were so close to living a happy life together in Mantua, but because that one letter describing Juliet’s plan didn’t get to Romeo, the whole thing fell apart and they both died.

It’s also easy to say that they were being young and overdramatic, but exactly how would you react if someone you love had just died and you had no plan for your life afterward? Particularly Juliet: her dad disowned her for even voicing her opinion about not wanting to marry Paris, so exactly how would he have reacted if she had to tell him that she faked her death and married a Montague, but now both that Montague and Paris are dead? She probably would have been shipped off to a convent, or worse.

The tragedy of the deaths of Romeo and Juliet is how they were somehow simultaneously completely accidental and inevitable. The whole thing is just a mess. 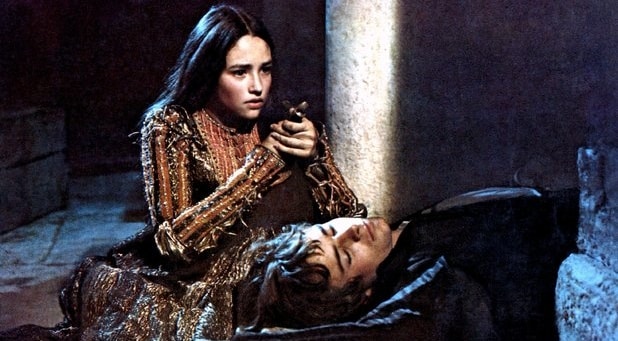 Juliet just before she ends her life in the 1968 Romeo and Juliet, directed by Franco Zeffirelli

But long it could not be
Till that her garments, heavy with their drink,
Pulled the poor wretch from her melodious lay
To muddy death.
(IV.VII.176-179)

Wow, this one is so sad. Whether you believe Ophelia’s death was an accident or her choice, the circumstances leading to it were utterly out of her control. In fact, her entire life was manipulated by forces she had no control over. Her father and brother dictate how she behaves, her place in society is predestined by her birth, and any choices she might make are constantly under scrutiny by a patriarchal world that punishes women for having any desire or agency.

She goes mad not directly because she loses Hamlet or because of her father’s death, but because she blames herself for those events. She believes, because Gertrude and Polonius tell her so, that Hamlet went mad over love for her. Then, as a result of his madness, he physically and verbally assaults her and kills her father. Though that is absolutely Hamlet’s fault, the way it has been framed to Ophelia is as though it is her fault for engaging with his love to begin with. That amount of misplaced guilt would drive anyone crazy.

So, does she die accidentally as a result of her madness — a final moment of her life out of her control? Or does she have the lucidity to make the choice to die — either out of guilt or because it is the only path left that she is able to choose herself? It’s hard to say, but no matter which way you look at it, Ophelia’s death is deeply tragic. 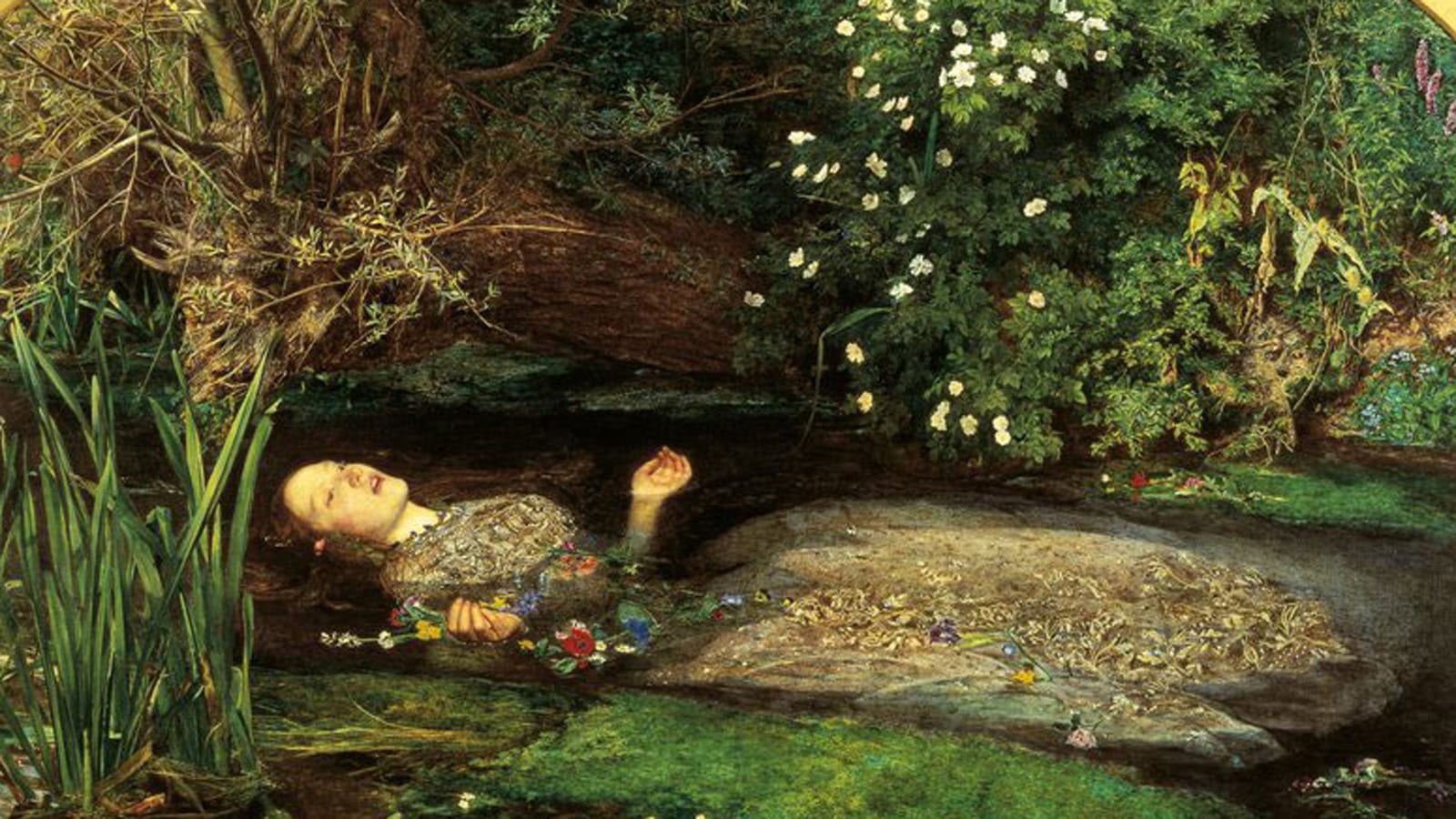 Let me sit heavy on thy soul to-morrow!
Think, how thou stab’dst me in my prime of youth
At Tewksbury: despair, therefore, and die!
(V.III.123-125)

There are a lot of innocent deaths in Shakespeare, but two of the most painful are the deaths of the princes in the tower, killed by their uncle, Richard III. Many murders in Shakespeare are performed by overly ambitious leaders seeking power (see Macbeth, Queen Margaret, etc.) but few are so blatantly cruel as Richard is to these two boys.

He begins by winning their trust, and leads them to believe that they are being locked in the tower for their own safety. These boys are 9 and 12. Of course they trust their uncle. He was the Lord Protector, for heaven’s sake! He was supposed to, you know, protect them! But, because these young, spirited, witty boys stood in the way of Richard becoming king, he murdered them both in cold blood. When they had so much life left to live.

The two princes in the tower, painted by Sir John Everett Millais

7 Books Every Business Student Should Read
Scroll to top