You are here: Home1 / Welcome To The No Sweat Shakespeare Blog!2 / Reviews3 / Twelfth Night Review, The Globe Theatre, August 2021

Sean Holmes’s production of Twelfth Night at The Globe Theatre is characterised by inventions and innovations within a faithful performance of the text, with a modern audience roaring at four hundred year-old jokes that have been told thousands of times on stages across the world during the four centuries, made fresh by a cast of excellent actors milking the comedy from the text for all it’s worth,

The drama unfolds in designer, Jean Chan’s, derelict, decayed 1950s fairground where the remnants of its history – a jukebox, a fun ride, a battered public phone booth – lie abandoned like the forlorn vehicle rammed up against the stage, in a space enclosed by a rusty, collapsing corrugated iron fence. It has a feeling of loss and grief, an echo of the mourning which is about to be dissipated by the love and joy brought about after a dramatic journey featuring Shakespearean comedy’s greatest hits – gender swaps, disguises, mistaken identities and spiralling misunderstandings. Those resolved and the couples happily united, the fairground is swept away along with the forgotten grief.

With such a high standard of acting it’s difficult to single out any of the cast. Wondering about how the casting of a woman may suspend the audience’s disbelief when it comes to the drunken, vulgar, very male Sir Toby Belch there is a swift answer right from the moment of Sir Toby’s entrance. Nadine Higgin, apparently the first woman actor to play the role on the professional stage anywhere, is a superb Sir Toby – utterly convincing. She arrives with a crate of beer and from that moment on the stage is a river of beer as Sir Toby and Sir Andrew Aguecheek (George Fouracres) perform their famous comic double act in several thoroughly enjoyable scenes. 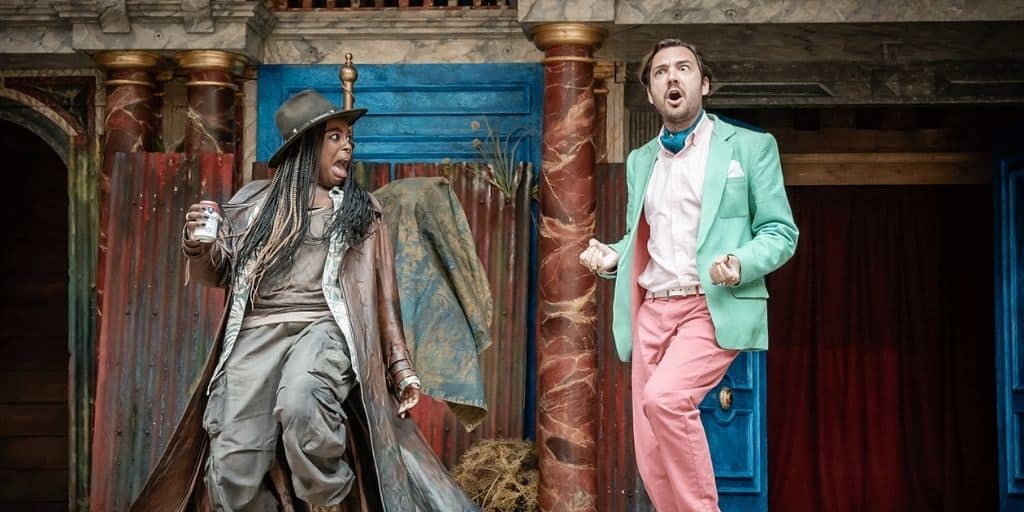 Sir Andrew’s arrival on the stage, dressed in pastel colours, singing an Italian folksong with ridiculous dance steps, is possibly the best moment in a production full of best moments. Later, the drunken scene interrupted by Malvolio is immensely entertaining with a mixture of the songs from the text with some modern American songs. It occurs right in the middle of the play and Sean Holmes has made the most of it as a central comic feature, drawing it out and comprehensively exploiting both the text and the talent of the actors for comic effects. What an entertainment!

The rascally Feste, Olivia’s fool, played by Victoria Elliott, moonlighting around the big houses of Illyria’s aristocracy, singing for money, dressed in a baseball outfit at home while performing in glam drag at other houses, works well with Sir Toby and Sir Andrew, effectively supplementing their comic routine. Elliott is a fine singer and performs Shakespeare’s songs to James Fortunes’s music and also to his other added compositions, beautifully.

The cast is led by an engaging Viola played by Michelle Terry, carrying the responsibility of playing what is possibly Shakespeare’s finest comic female character. Viola has to be assertive and tough, highly intelligent and wise, while at the same time vulnerable. Terry, following in the giant footsteps of Mark Rylance as actor/artistic director at the Globe, does it all. Her charisma on the stage is the perfect central point of the production. It is such good acting, and funny, particularly her little gestures and textual interpretations where she does things that Viola imagines to be masculine, thereby also emphasising her position as a vulnerable female in an increasingly dangerous situation.

Viola’s twin brother Sebastian is a laugh a minute. Sebastion is not a comic character and, to tell the truth, is a rather boring one, but Ciaran O’Brien plays him as a Georgian fop with every affectation one could imagine. The text does not call for that but it works and adds to the atmosphere of jollity that Holmes is after.

Shona Babayemi manages the transformation of the remote icy Olivia to the silly, lovesick teenager-like woman well. It’s a pity that she has difficulty in projecting her voice, resulting in the loss of much of her dialogue, thereby causing the audience to miss some of the important interplay between the two women.

Nadi Kemp-Sayfi (Maria), Bryan Dick (Orsino) and Jacoba Williams (Fabian) hold their own well but Malvolio (Sophie Russell) is a disappointment. It’s not the acting, it’s the interpretation of the role, which could be a directorial issue. Malvolio is seen by the other characters as the extreme, pompous, look-down-your-nose-at-people puritan, which the more that is played up, the funnier he, and the whole play, will be. There is little sign of any of that in this interpretation, and those puritanical features of Malvolio, referred to so often by the other characters, are largely missing.

It is not just the effect on the comedy that makes that interpretation disappointing. At the heart of every one of Shakespeare’s comedies is a dark shadow – something lurking beneath the lightness and joy of the main characters’ antics, suggesting an unlikable streak in characters we like. In Twelfth Night it is the almost unendurable cruelness perpetrated on Malvolio – the practical joke, his confinement in a dungeon, the taunting of him there and his exclusion from the celebration in the final scene. His vow to get revenge on the whole pack of them is important in the play but virtually lost in this production. Malvolio is written very much like Shylock in The Merchant of Venice. This production misses that essential aspect of Shakespeare’s comic plays as well as, by playing down Malvolio’s puritanical personality, a great comic opportunity.

Apart from that there is a niggle regarding this production, something that could easily be rectified. Some bits of scenes are performed beneath the stage, in the groundling area. Those are completely invisible to a large section of the audience, obscured by the standing groundlings. Not only that but the sound is also affected as the actors perform in an area that does not have the acoustical benefits of the stage. In the scene where the comic characters hide behind the truck (which is completely invisible) while Malvolio is reading the letter their comments and any antics they may be performing, are lost, thus rendering one of Shakespeare’s finest comic scenes virtually null and void for much of the audience. What a pity.

But, in spite of this reviewer’s grumpy criticisms, this is a very fine production and a great night at the theatre.